The Expanse - The one thing I liked about you is you always sucked at lying.

The best way to describe Strange Dogs, the first episode of the final season, is wariness. It permeates every storyline, from the grieving leftover crew of the Rocinante reckoning with the loss of Alex and the addition of Peaches Melba, to Chrisjen’s tentative alliance with Mars to fend off the Free Navy, to what remains of Drummer’s polycule now that they’re running from Marco’s wrath. It’s the wariness of people who have been at this – a changing and ever-escalating situation – too long, and without a break, and with no end in sight.

It’s like being stuck in a quagmire, without progress. All Chrisjen, and by association, Bobbie Draper, do anymore is try to protect Earth from the continuing onslaught of Free Navy asteroids, and dealing with the fall-out of what might just be living on a dying planet that may not support human life for much longer. It’s a concerted effort, one that takes up all of the energy left to both the UN and the remaining, non-mutinying parts of the Martian Navy. It has also put a stop to the flow of new pioneers through the ring gates, in part because the Free Navy is busy pirating those ships for parts. For a character that has always thrived on the forward movement of an escalating conflict, and done poorly when robbed of agency, Chrisjen (and Bobbie, who has a lot in common with her boss), this situation is frustrating, and unbearable. Luckily, the Rocinante provides a possible change in the dynamics. 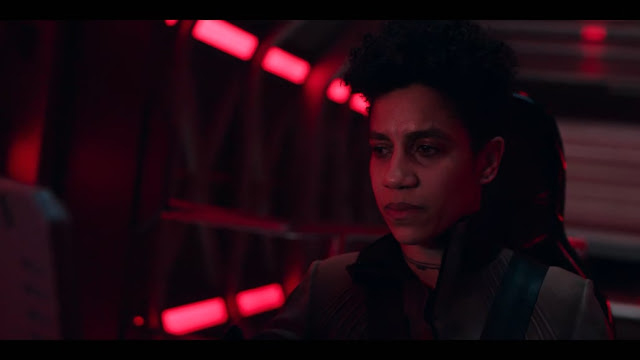 This happens when the crew stumbles across a small Free Navy ship, destroys it, and then discovers that Marco’s people are strapping stolen drives to space rock. With time running out, Holden seems a bit too complacent in the face of imminent death, a fact that is noted by both Naomi and Amos – but he does manage to disarm the drive before it goes off, and the information they can harness from it points them to a highly specialised ship that guides these rocks towards Earth. It’s better than picking out the countless, annoying ships one by one, but it’s also an insight into how truly tired James Holden is: a man who has been at the forefront of humanity’s history for a few years now, who has constantly stumbled into historical significance. Maybe he knew that there wasn’t enough time to get off the rock, or maybe, in the back of his mind, he calculated that this would be just as good a way to go as any other. What’s waiting back on the Rocinante for him is a Naomi deeply scarred by the decisions she had to make last season, leaving her son with his abusive father, and the quiet terror of sharing quarters with Amos’ adopted sociopath, Clarissa Mao, who he’s training to help him in the engine room without much support from his fellow crewmates. And of course, Alex’ loss weighs heavy on everyone. It’s the first mission in which Naomi has flown the Rocinante, without the crew’s dad at the helm, and the loss is felt by everyone.  Amos tells Holden flat out that the only reason he is still there (instead of getting blackout drunk on Luna) is because he cares about Holden, and that without Holden as the glue holding them together, the Rocinante wouldn’t be flying anymore. And everyday they go out there chasing Free Navy also means another day of Naomi continuing to be haunted by her past – in spite of having escaped Marco, her life is still determined by him. 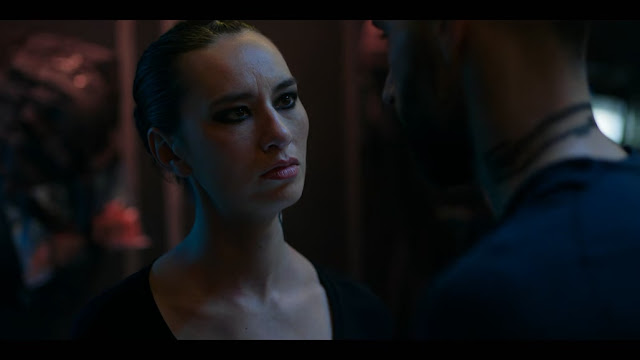 Similarly,  Drummer, who has made equally difficult decisions and lost parts of her family because of it, is out there, warily running from and plotting against Marco Inaros. One of the most fascinating parts of the last season and this one is the parallels between her and Naomi (and I do like the show for never making it clear what their history is: without complete knowledge, we can speculate, but we do know that they love each other one way or another). She is fighting with a crew of Belters who are not trained fighters, and it shows. In a showdown, Michio, one crewmember, fucks up, and it has dire consequences for their attempts to gather enough resources to fight back meaningfully. It’s a reminder that sheer determination isn’t always enough, and that not everyone is cut out for this fight, but asking Michio to leave is difficult, because every single one of these Belters is part of Drummer’s literal family (the dynamics of this were so interesting last season – they are family in the most traditional sense, sharing meals and bed, all but married, to an extent the crew of the Rocinante isn’t), and she’s already lost so much in this fight.

The reason for all the wariness is creating a kingdom for himself. Marco Inaros’ voices the grievances of the Belters, grievances that were legitimate, but the stumbling stone for the revolutionary has always been his personal shortcomings. He is a megalomaniac, an egotist, someone who craves leadership for his own personal gain. His new base is Ceres station, but his main struggle is one that doesn’t bring the glory he so desires. He has to build an economic base for his new Belter empire, one that is sustainable, without the complete dependence on Ganymede (which, we know from Prax Meng, is going to collapse soon due to an ecological cascade) . We see Marco struggling to listen to others who advice him, bored by questions of infrastructure: he would much rather win great battles, or at least successfully chase down the thorn in his side, Camina Drummer. He has also created an environment for his son that he hates, and Filip appears to be spinning out of control, drowning the fact that his father is getting all the laurels for things Filip achieved (things that probably haunt him more than he lets on) in alcohol and sex. Without the influence of his mother, Filip seems to follow his father’s footsteps: he is violent towards someone who turns down his advances, and then shoots his best (and maybe, only remaining) friend when he feels challenged. This situation is volatile, and everything that Naomi would have feared for her son.

Wariness will breed discontent, and for all these people, who are used to acting rather than waiting, it must eventually turn into some kind of progress.

In the episode opener, we see Cara – if you’ve read the books, you know who she is, who she becomes – a young girl, utterly fascinated with the strange fauna of a new planet. The scene reminds me of Becky Chamber’s fantastic To Be Taught, if Fortunate – what if exobiology was finally a useful field, but also the underlying danger of applying Earth-bound knowledge to something utterly strange and new, finding parallels where none exist. Something kind of looks like a bird, but isn’t really a bird. Something kind of looks like a dog, but is certainly not really a dog. Ilus has taught this lesson well, what it means to go somewhere new with all the baggage of the old, of charting new territory and finding whole new ways to die. It’s only at the end that the show reveals what planet this is: we’re on Laconia. And again, if you’ve read the books, you know what that means! (although I do wonder how far into it the show can get with only one season left, and without the luxury of spanning 15-20 years of history).

I did just finish the last book in the series, Leviathan Falls, and it is interesting to consider the comparison between the adaptation and the novels: here, Alex is still alive, the crew is scarred in different ways, has suffered different losses.

The show’s Camina Drummer is a mix of the book’s version and another character called Michio, and I’ve always wondered if they changed the character, made it more substantial, specifically because Cara Gee is such an undeniable force in the role.

Good to see that journalist Monica is back, here tailing Chrisjen and egging her towards action: I wonder who else will be back this season. Dr Elvi Okoye has a substantial role in the novels, but we have yet to see what she is up to on Ilus these days on the show.