Station Eleven - I wish you were here. 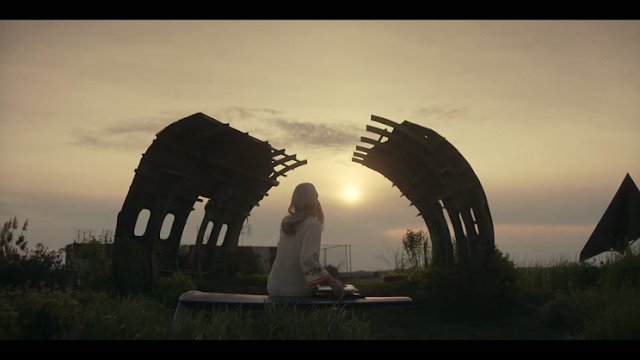 After her journey back to the past, Kirsten awakes in the forest – someone has taken her there, has made a little bed for her, laid out all of her knives, put her on the back of her horse Luli (the same name as her cat, in the apartment) and brought her to safety. Tyler tells her that it has taken three days for her to wake up, and in this time, he has found her edition of Station Eleven. They play out the death scene between them on the way, Tyler remembering all the lines even though he burned his version in his childhood. By the water, a man approaches them with a gun, and Kirsten says that they are “just actors”.

Tyler told Kirsten that there is something evil at the Museum of Civilization, and for now, it is unclear if this is the product of his interpretation of what they do there – preserve the past world in amber – or a more literal meaning of evil. It could still go either way, but the the triumvirate (and now a true one) is still in power after all those years, and Elizabeth and Clark and Miles (the man who captured Kirsten and Tyler) are still making all the decisions. Both Elizabeth and Clark also still firmly live in the past – Elizabeth goes out to the wreck of the burnt out airplane where she thinks Tyler died, and talks to him, looking for forgiveness or a connection, and Clark teaches the young children who have never seen the world before the pandemic about objects from the past that have lost their meaning now, like karaoke machines. It’s a weird idea, trying to teach nostalgia for something that these children have never lived through, trying to preserve the world that Clark misses by attempting to transfuse that feeling into his students. Almost right away, there is an obvious conflict between Clark and Elizabeth’s attitude towards the Symphony: Elizabeth is busy replacing the Conductor, organising and directing the troupe, while Clark insists on their strict quarantine protocols, as if the illness hadn’t disappeared years ago (Elizabeth asks “Nobody is sick anymore, why do you have to scare children?”). Later on, he will share his worry about the choice of play, saying that it is dangerous to allow the children and teens experience anger and questioning of authority on stage – and it becomes increasingly clear that Clark’s main concern is his grasp of power, which is slipping away slowly over time as the world changes into something he no longer recognises.

But is that, by itself, evil? It is by the Children of the Undersea’s ideology of “No Before”, as these people of the Museum of Civilization live for the past, and Clark doesn’t want them dragged into the now. It is maybe also evil because Clark’s fear, beyond his ideological drive to preserve the past both in his Tower that houses the museum and in the minds of the children at the airport, is that others out there will realise the riches held at the museum, and want their share in them. This is the only place we have seen so far that still has electricity and all the modern conveniences of the past. 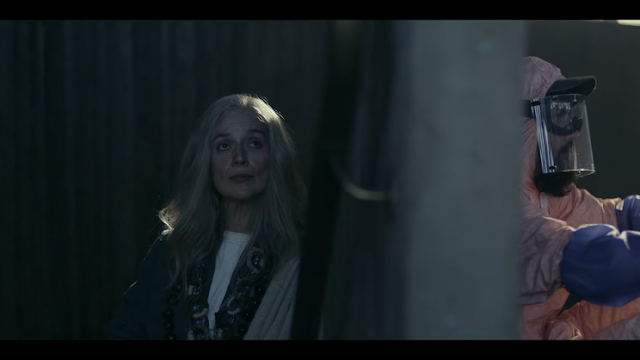 When Tyler and Kirsten are brought to him, Clark appears to be obsessed with proving their identity, making sure they aren’t dangerous intruders – but ironically, the test he fashions to prove that they are actors is precisely cut out for Tyler to pass. He knows Hamlet – after all, both of his parents were actors. His role as the Prophet is basically a performance. Kirsten and he play out another scene from Station Eleven for Clark, hitting all of their marks, and distracted by the transcendence of the performance (later, Clark will marvel at the pure power of it, even without a stage or costumes), he misses that Tyler is placing things all over the Tower. The performance transports him back, and he realises that he knows Kirsten, that he met her the last time he ever saw Arthur, when he visited him during the rehearsals for King Lear. Back then, he also tested Kirsten, maybe because he didn’t really like children that much and resented how much Arthur seemed to like her, maybe just to play a game: and back then, too, Kirsten knew all of her lines well.

Clark thinks he is careful and protective of his community, but he is distracted by how much Kirsten’s presence transports him back. It’s their shared connection with Arthur that does it, and Clark doesn’t even know yet, never realises, that Tyler is right there. His last memory of Arthur before he executed his will pops up, unbidden, clearly profoundly painful. He was nine years sober. He was in a solid, supportive relationship. And yet, one single day was enough to negate all that – watching Arthur perform as Lear, his talent that Clark thinks he never earned, while Clark himself is stuck in some managerial nightmare, the “CEO Whisperer” as far from the edifying stage as he could possibly be, propping himself up by telling himself that this world is more honest. Once the night is over, he’ll wake up naked next to Arthur’s bed, the remains of an 8 ball on a mirror next to him, his sobriety lost. Whatever Clark’s demons are, nobody triggers them more effectively than his old friend (who conveniently forgot about Clark’s sobriety, who pushes all of his buttons, asking him how he can live his current life when he used to be a violin player in a punk band). Before the harsh light of the morning, they debate art – Clark argues that Arthur surrounds himself with artists because they never push back against him, because they don’t take him seriously (he is a “movie star”, not a serious artist anymore). He is bitter and angry that he lost his friend Miranda when Arthur divorced her. Miranda created because she had to, not for an audience, not to seek greatness. She had to make things, for herself, regardless of whether her words would ever reach anyone or not. But the next day, Arthur dismisses him – Elizabeth and Tyler are here, and Clark is an embarrassment to him now.

Kirsten reunites with the other actors but finds out that Sarah had a heart attack, is being cared for somewhere else in the airport, that they are not allowed to see her. She immediately assumes danger, points out the barbed wire fence around them. The last time she allowed a place to become a home, a man staggered in and killed Frank – all those things that the other actors love here, the safety, the promise of a warm home during winter, are things that Kirsten deeply mistrusts. Alex insists that they must perform, because the people at the airport have never seen a play (she is simplifying, obviously – the children here never have), but Kirsten wants to find Sarah and run. And then, as Alex tells her about Elizabeth directing them, she puts it all together – she remembers Elizabeth, and she realises who Tyler is, how he has come to know Station Eleven so intimately. 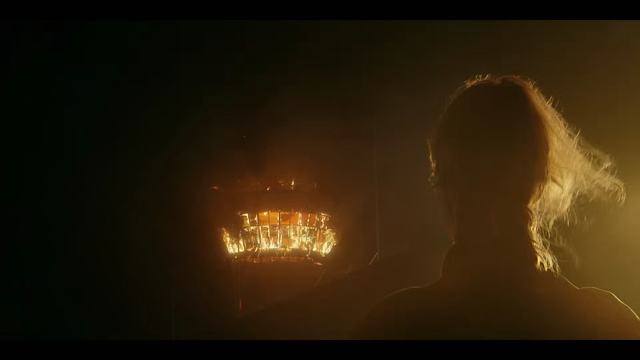 Tyler helps Kirsten find Sarah, and she watches her from a ventilation shaft, speaks to her. Sarah tells her to not tell them that she’s dead until after – after the performance – and that Kirsten has to get better at saying goodbye. And then there is a literal fork in the road: she can stay with the Symphony, or come with Tyler. She leaves with him, follows him outside, where they talk about their first 100 days after, where Kirsten tentatively speaks of being a child and meeting Arthur – loving him – to confirm that he was Tyler’s father. They never met back then because Elizabeth and Tyler were late to the premiere. Tyler explains to her that the moment that changed everything was when he tried to help the man that escaped the plane, took him inside the airport, and was locked up in quarantine after Miles shot the man – it’s as if the considerations that led to this indict the Before, as if it undermined any trust he may have had in Elizabeth and Clark. He releases Kirsten from the Undersea, sets the paper plane monument built to the demonstration of The Museum of Civilization’s cruelty, and finally sets off the charges he hid in the Tower, in the Museum. There is no Before anymore. The torch has been lit for the Children of the Undersea, and they are on their way.

In the flashback, after Kirsten and Clark first meet, Arthur tells him that Kirsten’s life is sad, but you can’t tell – will we ever know anything about Kirsten’s life before she came with Javeen? Is this why the relationship with Arthur became so central in her life, why, once she had Station Eleven, she found so much meaning in it?

Kirsten:  Arthur gave me Station Eleven, and when I read it, it didn’t matter that the world was ending. Because it was the world.

Throughout the episode, Clark (who lives with Miles now, quite happily, in a space of their own) is overly concerned with how he is perceived, if he is still liked, as if his tight control over what people at the airport know could preserve what he means to them.

It is heartbreaking to see all the hope that Elizabeth has in gaining her son back, except obviously none of this is going to end well.