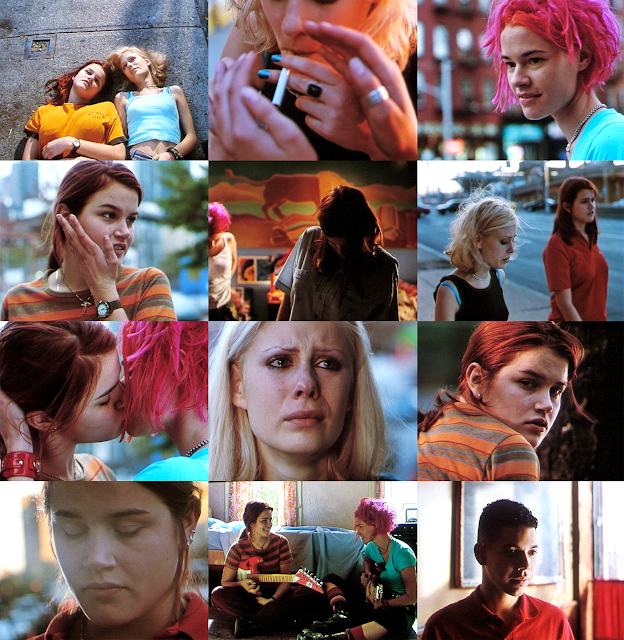 Alex Sichel and her sister Sylvia (who wrote the script) originally set out to make a film about the riot grrrl scene, and it is still essentially a film about music: about how songs carry you through the day, about having ambitions but still needing that one necessary piece of the puzzle to realize them, about that moment when things fall into place; but, with a beautiful honesty, All Over Me also portrays the violent moment of a friendship falling apart completely because two people have grown apart so entirely that they can't even find the common ground to say hello to each other anymore.
Claude (Alison Folland) and her best friend Ellen (Tara Subkoff) live in neighbouring high-rises in Hell's Kitchen. Claude is trying to start a band (the posters on her wall hint that she is very conscious of the existence of riot grrrl, and she admires Patti Smith), but Ellen is more interested in her new boyfriend Mark (Cole Hauser), a troublesome violent drug dealer. Claude is also in love with Ellen, but can't bring herself to tell her; and instead jealously witnesses Ellen's infatuation with Mark, and the way she changes in the relationship, as she develops an addiction to drugs and gets too involved in Mark's criminal activity. While Ellen is drifting away, Claude also changes, slowly: a musician (Pat Briggs) who has just moved into an apartment in her building points out to her that all-girl bands aren't just something that exists on her walkman and on her walls; he tells her to look into the music scene that is just around the corner, which Claude, nervous but anxious, finally does.
The film is at its best when it portrays the transformative power of music and finally fitting in and these moments of realization: at the club, watching the band (Leisha Hailey, performing a song by Helium), a smile starts to spread over her face and she seems to finally feel like she's found a place that allows her to be herself. Later, she has an emotional breakdown facilitated by Patti Smith's Pissing in a River - a wordless moment when she realizes that she will need to let go of her past, to an extent, but isn't quite sure if she can't yet.
All Over Me is also about homophobic violence and about the prejudices of the neighbourhood and the police investigating the murder of a gay man - the event at the core of the movie that ultimately destroys the friendship between Claude and Ellen, the decisive moment when Claude realizes that her best friend and the girl she's been in love with isn't going to give up her toxic relationship with Mark, will choose him over her and a horrible lie over the truth. In the end, Claude has found her place, but Ellen is left behind, completely alone.
1997, directed by Alex Sichel, starring Alison Folland, Tara Subkoff, Wilson Cruz, Cole Hauser, Leisha Hailey, Patt Briggs, Ann Dowd.
at 04:31