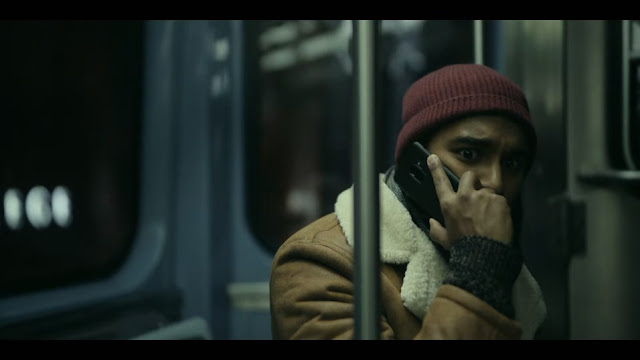 How odd that both Station Eleven and Y: The Last Man would come out in the same year, the second year of a world-wide pandemic. It takes years for television series to be made – and the source material for these stories dates back to the early 2000s and 2014 respectively. And yet, here we are: back into another story with a clear caesura between before and after, a clear cut between the past and the presence.

Another thing these two stories have in common: the illnesses that cause their apocalypses, their ends of the world, are sudden. They do not happen gradually, over time, with change creeping into the everyday until it eventually becomes unrecognisable. Y’s happens in an instance, and Station Eleven’s happens within a few days. There is no adjustment period, no frogs slowly cooked to death in the gradually heating pot. It isn’t a whisper that ends the world.

This connects with what I think is the best moment in this first episode that mostly follows Jeevan (Himesh Patel) and Kirsten (Matilda Lawler) on their odyssey from the theatre in which they have just witnessed the star actor die of a heart-attack to Jeevan’s brother Frank’s apartment. On the subway, looking after the eight-year-old bit player who got lost in the chaos of Arthur Leander’s (Gael García Bernal) last moments as King Lear, Jeevan answers a phone call from his sister Siya, who is an emergency doctor. She tells him that the flu that has been in the news is deadly, and spreading more quickly than the news or politicians have let on; in fact, her own emergency room is flooded with patients, too many to help, and she herself has begun to develop a cough that she knows will kill her. She tells Jeevan to go to their brother Frank, and to barricade in his apartment. Jeevan goes from the strange and disorienting experience of seeing a stranger die (a world of theatre and public transport) to a world that, his sister tells him, is ending, and it shakes him to the core. He immediately has a panic attack, but he has also assumed responsibility for Kirsten in the absence of any other adults, and so he cannot run away and hide – he has to keep up a façade of normalcy for this child that cannot possibly comprehend what is happening. And there it is, the caesura. 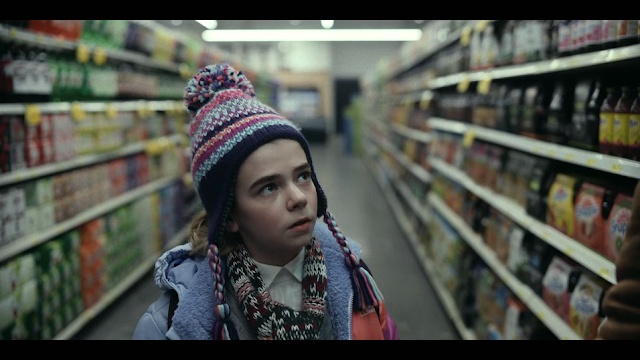 I love how Station Eleven introduces these characters without much context – we meet Jeevan first as an audience member of King Lear, realising that Arthur Leander isn’t simply acting, but having a heart attack. The fact that he follows this realisation up by immediately racing on stage, in spite of the fact that he knows no CPR, tells you so much about him as a character. He has an instantaneous impulse to help (later, in a discussion with Kirsten, he questions if he was the only one to realise – perhaps he was simply the only one who decided to do something about it), but no resources to make a difference. The same happens after Arthur is taken away in an ambulance, and he finds Kirsten by herself, with nobody stepping up (her “wrangler” is in the ambulance with him): He knows he cannot leave her there by herself, and navigates the awkwardness of being a stranger asking a child to trust him, against everything her parents and the world have ever told her about strangers. And yet, when he receives the call from his sister, he does not leave Kirsten behind, and he again does not abandon her when she knocks on her house door and her parents don’t open, and she reveals that she doesn’t have a key. In a world that is already quietly falling apart around them (increasing sirens, a concerned cashier at the supermarket where Jeevan spends $10,000 on provisions asks him what he should do, if this is serious), Jeevan asks Kirsten to make a decision between coming with him, or going back to her parents, and it is only when she quietly waslks away to catch a taxi by herself that he realises he can’t go through with it, that this isn’t a decision any eight-year-old should be asked to make. So he lies to her, and tells her her parents contacted him and asked him to look after her for now. It’s the white lie she knows she needs to hear to be permitted this safety, and it’s probably a lie that saves her life. 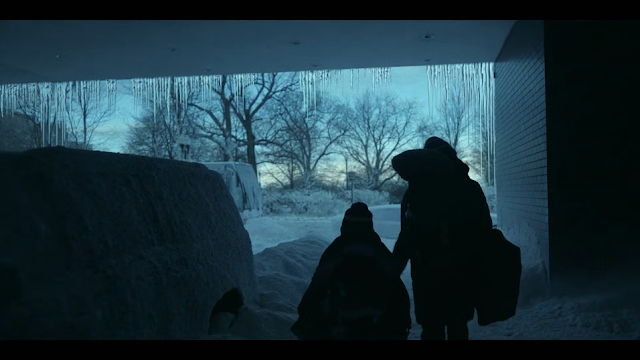 The point here is, I guess, that the first instinct that people reveal when something like this happens tells you a lot about them, and Jeevan’s instinct to rush on stage in spite of his girlfriend’s embarrassment and his willingness to look after Kirsten shows a man who, underneath the surface of someone suffering from a panic disorder, is kind and caring. But the other thing that comes to the surface sooner rather than later is how quickly a pandemic draws the line between people – Jeevan and Kirsten come across a car that has crashed against a tree, and a sick man inside, and Jeevan immediately knows that this man cannot be helped, that any instinct to help him would condemn them both to death. There is an inside, and on outside, as soon as Jeevan comes to accept his sister’s warning as true, and it hints at the world that is coming beyond the veil.

The episode ends with Kirsten and Jeevan’s arrival at his brother’s luxurious apartment, with Jeevan trying to convince Frank of what is happening but then having the story told by a plane crashing right in front of their window – and then they close the door, and after 80 days, only Kirsten and Jeevan come outside into this new world ready for a journey through this persistent deep winter.

And years later, in the future that has emerged, Kirsten (Mackenzie Davis now) is at a beach, leafing through Station Eleven – the graphic novel that Arthur’s ex finished, that was given to her as a child – and she is reminded of the theatre rehearsals, the circle closing. This Kirsten has spent most of her life in the after, but she has become an actress. 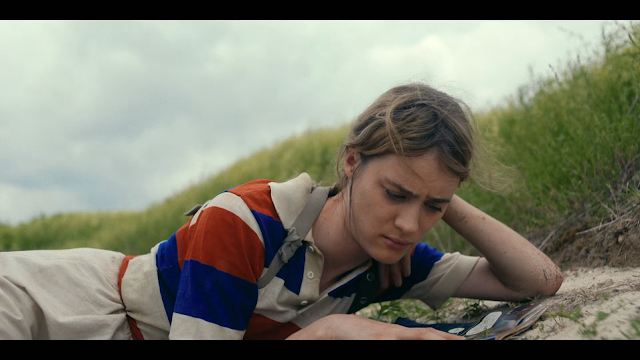 Another great moment of quiet characterisation, when Kirsten asks Jeevan about his girlfriend, and whether he thinks they will get married, and he says he thinks so – except anyone in the audience of the show would immediately think “no way”, if only because she made the decision to leave him behind. Pandemic or not, she wasn’t going to marry Jeevan.

I like that Jeevan is our hero in this episode, the brother that Siya more or less describes as useless, who stumbles over an answer to Kirsten’s simple questions about his profession, who sounds so yearning when she tells him that all she wants to do is act. Jeevan is lost in the presence, but he does spring to a surprising resourcefulness once things begin to crumble.

When Kirsten asks Jeevan if Arthur, whom she liked a lot (and who gives her Miranda's graphic novel, Station Eleven, which she holds on to for a long time), is dead, he responds “If he is, he was doing what he loved most in the world, so that’s cool, right. “ Which is maybe a bit too much for an eight-year-old, but mostly, Jeevan doesn’t make the error of underestimating Kirsten in their journey together.

A moment of levity that hits differently in 2021 than it would have at any other time: talking about whom they called after realising they would all likely die, one of Siya’s coworkers quips that he “just tweeted bye”. And yet their doors remain open, and they help who they can, even though they know that these shipments of antivirals are utterly useless against whatever plague this is.

Photography and music are absolutely gorgeous.