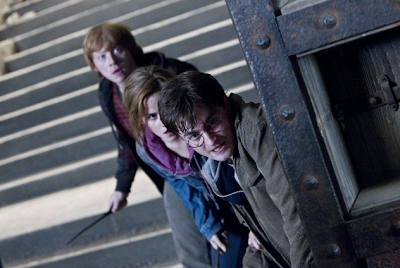 Words are, in my not-so-humble opinion, our most inexhaustible source of magic. Capable of both inflicting injury, and remedying it.

My first introduction to Harry Potter came on a June afternoon. One of my best friends and I have always had a hard time finding movies to watch that we both like; our tastes are completely different. One day we decided to watch Harry Potter and the Prisoner of Azkaban - neither of us had read any of the books, or seen the two previous movies, but it was one of the last weeks of school and we felt like going to the movies. We came in late. An older lady was just in the process of turning into a massive balloon and eventually flew away. It took some time to find our footing in the story, I suppose, but even without ever having read or seen any of the original material, we were both familiar with the main characters. I can't pinpoint now why exactly Alfonso Cuarón's adaptation of the third novel was the perfect introduction to the series for both of us, but it started a tradition. I read all of the novels that were available at the time over a very short time, borrowing them from a friend over the weekend and returning them the Monday after (something I remember vividly because all the reading for the papers required for graduating school was done at the same time - so I read all of Virginia Woolf's work at the same time, and a lot of German literature from the 1950s and 1960s). We watched the two previous movies together, and always made a point of going together to see the new ones, some of them more than once.

I suppose I wanted to relate that story, before getting to the point, because it contains two of the main reasons why watching the last movie, and therefore the final final conclusion of the series, was an emotional moment. I didn't grow up with Harry Potter. I could have, considering that both I and my friend were the same age Harry was when the first book came out, but I was 17 when Prisoner of Azkaban was released, an avid fan of Star Trek: Deep Space Nine and Buffy the Vampire Slayer, and someone with an explicit tendency to prefer darker material over simple and light one. This is why the movie appealed to me: going into it, I expected a sort of light-hearted adventure movie for adolescents, and it wasn't. In fact, it was closer to Buffy than anything else, the story of someone burdened with a prophecy and facing incredible trials, a story that never hesitated to sacrifice some of its most beloved characters, a story about bravery and friendship, and finally, a story that didn't just feature an evil Big Bad, but also the, at least to me, more terrifying prospect of adults enabling that evil for power, or simply because they lacked the bravery to stand up against it. Voldemort is a terrifying villain, but the more devastating aspect of the story for me has always been the way it strips Harry of all the reliable support systems that children and teenagers are supposed to have: the parents are already gone when we first meet him, but then, he also loses many of adults he trusts and relies upon, the political system that is meant to protect fails, and finally and probably most devastatingly, Hogwarts (as embodied by Dumbledore, its protector) is turned into the opposite of what it is meant to be.
And here we finally are, at the beginning of Harry Potter and the Deathly Hallows, Part 2. Harry, Hermione and Ron still have to destroy three of the remaining Horcruxes, and to do so, they first have to infiltrate Bellatrix Lestrange's vault in Gringotts, and then return to Hogwarts, since Tom Riddle's obsession with wizard royalty has led him to choose historically important artefacts as vessels. History, and especially family history, has slowly turned into a vital part of the series, to understand the motivations of the characters. Sadly, the conclusion of the story doesn't include the family history of Albus Dumbledore, but, not unlike the previous movie did with the story of the three brothers, the story-within-a-story told here is one of the best (and emotionally devastating) parts, and an example of incredibly efficient storytelling. Harry Potter has always, at its core, been about love - the love of a mother that protects a son, against all odds, the love between friends that makes them risk their lives for each other, for a greater good, and now, also, the love of a well-established villain that finally reveals him as "one of the bravest men" Harry ever knew. Severus Snape's story is told beautifully. Sadly, with some exceptions, the movie doesn't have the time to tell other character's story with the same detail and care - which is, on the one hand, successful, since the previous dwelled on those significant quiet moments that reveal so much about the characters and how they relate to others, and the final battle is meant to give the viewers the same sense of shell-shock and trauma that the characters experience as they stumble through the scenes, trying to navigate Hogwarts as it slowly turns to ruins. On the other, the movies have always been particularly successful at fleshing out the minor characters (especially because they were so perfectly cast), and it is a bit disappointing to see them given so little time to finish their stories, even though they all get their shining moments of heroism (or, more devastatingly, simply a lingering shot to portray that there are always deaths in a war, and that death doesn't always award characters with meaningful last words - another insight Harry Potter shares with everything Joss Whedon has ever written). The battle would have been lost without the kind and observant Luna Lovegood, or the daring bravery bordering on the mad by Neville Longbottom, but I would have personally preferred it if I had been given the chance to spend more time with them (and with Minerva McGonagall, and all the other students and teachers fighting against the impeding Death Eaters) than on that rollercoaster ride in Gringotts, or on those Broomsticks fleeing from the flames in the Room of Requirement.
Nonetheless, the film does wrap up the story beautifully. It's incredible to see how far the actors have come, how much they have grown with their increasingly more complicated roles. Daniel Radcliffe's grand moment is towards the end of the battle, when Harry realizes what he has to do in order to stop the slaughter, and quietly, and all alone, walks into the forest to die. The scene following is probably even an improvement over the novel, the little deus ex machina that rewards all the love, bravery and selflessness (and hey, you know who else came back from the dead? Twice?)
Finally, the epilogue. I have to admit that whenever I've reread the novel, I left that part out. Why? Because someone already mentioned here a couple of times taught me that beating the Big Bad doesn't necessarily mean that the heroes get to live on peacefully and happily ever after. The "What now" usually means a short resting period, because evil doesn't just disappear with one symbolic act. It's a well-deserved kindness, of course, and it is also to show how much the horrible battle and the sacrifices were worth, to see the children grow up the way Harry, Hermione and Ron were supposed to.