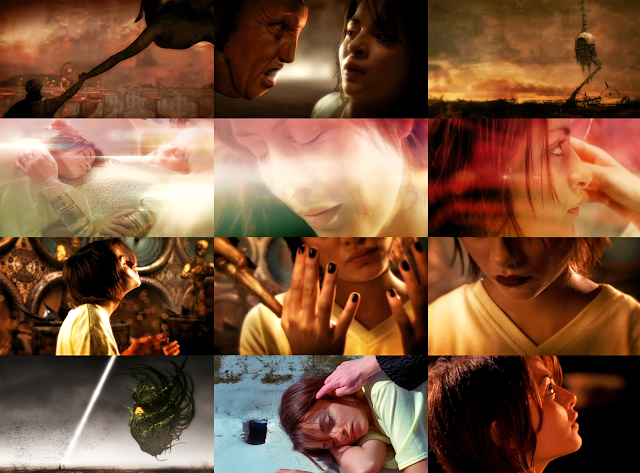 Helena: Does everyone around here have a mask?
Valentine: Of course. How do you know if you're happy or sad without a mask. Or angry, or ready for dessert?
Helena: I've got a face.

Helena's (Stephanie Leonidas) parents are running a circus. She is desperate to lead a normal life (while all the kids in the audience dream about running away to join the circus, she wants "to run away and join real life", and after a fight, her mother (Gina McKee) breaks down and is admitted to a Brighton hospital, needing brain surgery. Suffering from a terrible feeling of responsibility for what happened and regret for not being able to properly say sorry, Helena finds herself in a fantastical world - a kingdom that is slowly falling victim to dark creatures after its queen has fallen into a coma. Helena sets out to find a charm to revive the white queen, but has to overcome betrayal and the grasp of the dark queen, whose daughter really has run off to join the real world and looks exactly like Helena.
MirrorMask is based on a story written by Neil Gaiman and director Dave McKean, and it's the sort of movie I wish I could have seen at ten or eleven. Leonidas' Helena makes a fabulous heroine, trying to navigate the strange world with the help of Valentine (Jason Berry), a "very important man with a tower" (that has taken off after a fall-out - and Valentine, physically unable to say sorry, can't seem to get his home back). The visualization of the mirrorworld is beautiful, and it is filled with incredible ideas: book that take off angrily if you insult them, strange monsters who demand unsolvable riddles for passage, giants in the sky, fish floating through the mist, penguins who keep on losing their beaks. The music by Iain Bellamy is beautiful.
MirrorMask (2005), directed by Dave McKean, written by Neil Gaiman, starring Stephanie Leonidas, Jason Berry, Gina McKee, Rob Brydon, Dora Bryan, Stephen Fry. 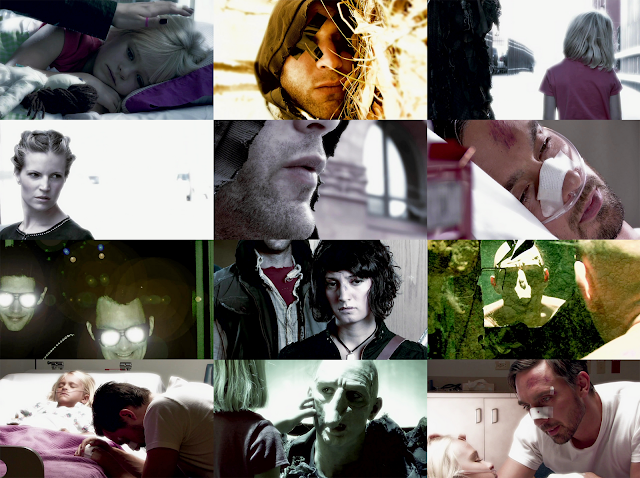 Jacob: A man has a weakness, he's flawed. that flaw leads him to guilt, the guilt leads him to shame, the shame he compensates with pride and vanity, and when pride fails despair takes over and they all lead to his destruction, and it will become his fate. Something's gotta stop the flow.

Ink, like MirrorMask, does an incredibly job at visualizing strange worlds, at finding a visual language for fantasy (Ink achieves this on a relatively low budget, stunningly). It presents a complex world, filled with strange creatures, but leaves it to the viewers to try and grasp what is happening instead of explaining every single detail. There are storytellers, who take care of people's good dreams, and there are incubi, who try to corrupt them, who bring horrible nightmares. Ink, the titular creature, is in-between the two - a drifter, stuck, tortured by emotions and memories, desperately trying to become an incubi so he can finally forget the bits and pieces he still remembers from his life. He kidnaps a little girl - Emma (Quinn Hunchar), who has fallen into a coma - and tries to deliver her as a sacrifice. A storyteller (Jessica Duffy) starts to fight for his soul and to help the little girl find her braver - meanwhile, in the real world, other storytellers, lead by Allel (Jennifer Batter), with the support of sarcastic and blind pathfinder Jacob, try to help the girl's father (Christopher Soren Kelly) to make the one right decision between his career and his daughter - and slowly, the film reveals the connections between the different realities. This is a beautiful tale about essential questions: why do we live? How do all the little and big decision we make in our daily lives influence the future? What is really important, and what isn't? Tick tock, this man got rocked.
Ink (2009), directed by Jamin Winans, starring Christopher Soren Kelly, Quinn Hunchar, Jessica Duffy, Jennifer Batter, Jeremy Make, Eme Ikwuakor, Shelby Malone.
at 22:40