Popular - You inspire me to be a better person.

I have this theory about friendships: there comes a point in the course of a friendship where it turns into an all-or-nothing deal, at least if it’s a close friendship. There a limit of betrayal between children, but once you grow up, there’s so much more at stake. Boyfriends/girlfriends, secrets shared that may really do some damage – and at the same time, friendships become more important than ever, considering the already complicated and potentially damaging struggle of getting through school while figuring out yourself. All About Adam isn’t the strongest episode of this season, but it is an interesting one, because it introduces a narrative device with the frightening ability to find all the little soft spots, all the weaknesses, and use them to sow destruction. Even more interesting, it’s destruction for destruction’s sake. I couldn’t care less about Adam’s motives, and the episode doesn’t really give him enough space to make the viewers truly care about him, but it is endlessly fascinating to see the dark things that he brings to light, and, at the same time, the surprising and kind things that also come from reacting to him. In a way, he takes everybody apart, but in the end, most of the characters come out stronger – strong enough that previously broken relationships are mended.
Mysterious Adam (“That Guy From Prison Break”) comes out of nowhere and sneaks his way into everybody’s life. He finds Brooke watching, from the outside, as the cheerleaders practice without her (apparently Nicole has found a way back in), not really noticing that she is missing, she sees Carmen and Josh in early relationshippy bliss (so that happened). “It sucks feeling like you’re invisible”, says Brooke McQueen, and Adam pretends like he does understand (or does understand, but it doesn’t matter, understanding someone’s position because you’ve shared it once doesn’t automatically lead to empathy), and shares that he wants to become a cheerleader. Brooke supports him, but her position within the squad is precarious. Somehow, Nicole has slowly eased her way back up and is a serious contender in the race for shaping everybody else’s opinions. She points out that Brooke’s last cause went wrong when Carmen left the squad, so her instincts can’t be trusted.


But other things have changed as well. Brooke might have lost her predominant position in the squad, but at the same time, the feud with Sam is over, and it’s not too difficult to win her for the cause (after all, a boy in the cheerleading squad is exactly the kind of gender-binary questioning Sam is usually up to!). in the same vein of surprising new agenda setting, Brooke decides to follow Adam’s advice and become a model; she enters a contest and if she wins, she’ll “get to do a commercial for Chick Power Magazine with the girls from the US soccer team”, and get to go to NYC.
It becomes obvious that Adam’s agenda isn’t exactly helping Brooke when he also finds a way to insert himself into everybody else’s life, and changes his stories and his appearance accordingly. He is a supportive friend to Brooke; but to Nicole, he is an ally, someone as manipulative and power-hungry as she is (at her worst), promising her that he will get Brooke out of the way eventually, “which will leave Kennedy High’s Camelot wide open to her successor” (a couple of scenes later, he proves that he really has everybody figured out when he states in an interview with Sam that he “was raised by feminists”).
When playing nice doesn’t work out, Adam recovers embarrassing facts in the lives of the remaining hesitant cheerleaders (as if Caged! wasn’t enough; there are more dark secrets! Nicole used to be overweight! Mary Cherry toured with Up With People! Poppy Fresh is the Cuba chapter president of a Hanson fanclub, despite “aversion therapy, alternative councelling, the Backstreet Boys!" All the while, the person most affected by Adam’s power play is Brooke. She loses the contest against Sam. She watches Carmen’s happiness with Josh. Adam sets her up to be found out as a pothead, is kicked off the team and Adam takes over right away. There is a subtle little moment before Nic and Brooke actually decide to be friends again, when Brooke cries in the Novak and Nicole watches her, clearly torn between her anger and an instinct to help her friend, that is incredibly well executed and acted. Nicole wasn’t just friends with Brooke because it advanced her social position, she was friends with Brooke because she cared about her, and her anger after their fight is genuine, but so is her desire to mend the relationship.
The other interesting aspect of the episode is that it’s clear from everybody’s behaviour that things have changed since the pilot: Carmen and Sam don’t gloat when Brooke’s position gets worse and worse, if anything, they feel bad about it. Carmen puts it to words: “I thought I’d throw a party when McQueen finally failed but now I’m just sad.” There is no great divide between the two groups anymore, and they all decide, eventually, that Adam is their common enemy, one they can only beat if they unite their efforts. “It’s time for the peasants and the aristocracy to work together!”, declares Mary Cherry, and thus they discover Adam’s true identity: Billy-Bob Smelt, a Toledo-student who was wronged and decided to set out and take revenge on every single cheerleader.
For the most part, All About Adam is a pretty ridiculous episode – the over-the-tope elements outweigh the seriousness – but then, towards the end, the episode is revealed to be mostly about Nicole and Brooke’s friendship. And darn, if those parts aren’t lovely (and well acted. I really wish Tammy Lynn Michaels to miraculously suddenly have a brilliant career because it makes me endlessly sad that she doesn’t have one already).

Nicole: You should be wearing a diamond tiara, B, not a salty one.
Brooke: Go ahead, Nic, make fun of my precarious decline so that you and your new best friend Adam can get in another cackle at my expense.
Nicole: Adam is not my best friend, Brooke, you are. I’d rather crawl through glass and see you selling pretzels at the mall while listening to the Muzak version of La Vida Loca.
Brooke: Really? I didn’t think anybody cared what I did anymore.
Nicole: I’m really sorry. I never should have done what I did with Josh and I’m an idiot and it will never happen again.
Brooke: Oddly, Nicole, that’s not enough for me. You know what? Can I ask you something? Why did it happen at all? Why would you do that to someone you claim is your best friend?
Nicole: I’m a bitch, okay, I admit it, but you inspire me to be a better person. God, if I’m half as evil as that horrible vampire adam, then I should be burned at the stake. But the truth is, I don’t want my friends to have to accessorize with Madonna style crucifixes. That’s so Eighties!

There is a point in this conversation when the tone changes subtly and it’s clear that this is serious, that despite the fact that we’ve just watched Popular’s version of Charlie’s Angels discover a mad former cheerleader clinging to a rat and revealing Adam’s dark secrets, the episode is more concerned with the importance of friendship, and the unlikely mending of one. I suppose there is also a second point about how everybody kind of tries to reinvent themselves in high school, especially when they find that their real identity isn’t accepted, but the parts between Nicole and Brooke are what really worked in this episode. Nicole also finds herself changed, after Brooke forgives her: instead of making Adam’s life horrible, she decides to give him a second chance (“I own you now, got it, little well-groomed one?”. And in the end, all is well, and for the first time ever, the two groups are united, taking kitschy MSCL-esque pictures of their shared happiness.

Adam: Nicole is such a nasty slag. As if she’d be anything without you. I mean, you’re Maria. She’s Anita at best. Is Mary Cherry retarded?

Carmen: So Josh, you wanna go work on the vocabulary thing and then we can discuss the pros and cons of making out behind the school?

After Sam surprisingly wins the contest (Carmen entered her), Brooke’s anger just this once turns against the person who is actually responsible: Carmen. Of course, the fact that Carmen is also dating Josh gives her all the more reason to be angry at her.

Carmen: Cause it’s all about you. Right Brooke? You underestimate people. Sam, Me. Why don’t you just admit that you never imagined someone who found you attractive could also find me attractive? Now I know that once in a while there are “come from behind” victories.

“I can be a website designer! Or a construction worker! Or a supermodel! I can be whatever I want to be; I’m a girl, dammit!”

Mary Cherry: Thanks to my subscription to Soap Opera Puzzle Magazine, I’m a whiz at the impossible anagram. Like mine's, Adam’s is a criminal mind.

Mary Cherry also tries to get “Joe’s” attention by continuously fainting into his arms, only that his arms are no longer there when she faints and there is only the cold, hard floor and the horrible feeling of love, unrequited.

Nicole: I must say, Spam, you’re a veritable Nancy Drew!

Also, undeniable linguistics boner for the way Mary Cherry discovers where Billy-Bob is from. Yay, regional variables and diphthongs.

So Brooke McQueen is a fan of Paul Thomas Anderson’s early work, or was just curious to see what Marky Mark was up to these days?

Chick Power Magazine sounds exactly like the kind of sad, post-riot grrrl publication based on the assumption that articles about riot grrrl fit neatly into the Style section of magazines.

Also, Diane von Fürstenberg is Adam’s godmother, in case you were wondering.

Adam (about Sam): Did the Indigo Girls lend her the outfit?

Sugar: He admitted to me he had a one-night thing with Queen Latifah!

He rescued beagles with Alec Baldwin and Kim Basinger!

The two soccer players in the episode are real: Tisha Venturini and Tiffeny Milbrett.

ALL ABOUT EVE. Classic. 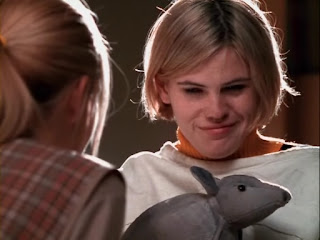 I always forget this episode when I think of this series, but it's certainly a good one, even if it does take a rather odd turn towards the end. If nothing else, though, this one is worth watching just to see Mary Cherry reveal her bizarre anagram super powers!

I am seriously in awe with how Leslie Grossman plays Mary Cherry. Her semi-cult status is definitely well-deserved.

I'm sorry but... even when this chapter isn't clearly one of the best ones... It has Mary Cherry in it. That's enough for me.