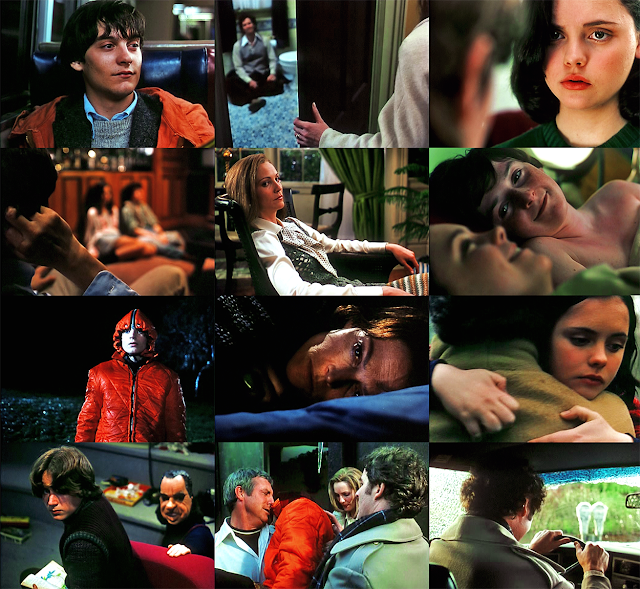 It was a typical predicament for the Fantastic Four, because they weren’t like other superheroes. They were more like a family. And the more power they had, the more harm they could do to each other without even knowing it. That was the meaning of the Fantastic Four: that a family is like your own personal anti-matter. Your family is the void you emerge from, and the place you return to when you die. And that’s the paradox - the closer you’re drawn back in, the deeper into the void you go.

I remember watching Ang Lee's adaptation of Rick Moody's novel for the first time, at the age of fourteen, and realizing that this film would inevitably change my preference for stories. It probably would have happened with any other quiet, subtle film, this first look into a universe in which films weren't either big action movies produced by Jerry Bruckheimer or conventional film classics that seemed to be on endless repeat on television, as if there were no limit to how often one can enjoy Forrest Gump or Pretty Woman. Even if I hadn't felt that The Ice Storm still lived up to that initial flurry of emotions and thoughts I had when I first saw it, it would have ended up on my list of favourite movies, simply for the role it played in the years following that experience. It made me actively seek out stranger films, buried in late night television programming and the more costly rows in stores. It turned my attention to directors. In a way, The Ice Storm was like a rabbit hole into a different world, and for that alone I will always cherish it.
Ang Lee's adaptation is also one of the few examples where I prefer the film over the novel it is based on: Perfectly cast, it thrives upon the stunning language Lee finds for the coldness and isolation that defines the story. The two families that it follows - the Hoods (Kline and Allen) who have a daughter living at home (Ricci) and a son in a fancy prep school (Maguire), and the Carvers (Sheridan and Weaver), who have two sons (Wood and Hann-Byrd) - inhabit the kind of glass-and-concrete boxy houses in the woods that look beautiful but inadvertently convey a sense of remoteness and seclusion, as if those living in them literally managed to inhabit their own emotional landscape. The families are connected. Within the community the movie portrays (a collection of odd people, connecting regularly at social events but never really seeming very close), they are an exception: the children are friends (Wendy is secretly dating Mike, the older of the two brothers, even though the film succeeds in portraying her connection to the younger, pre-adolescent brother as more intimate), and so are the parents, in spite of the fact that the two women seem to have nothing in common. As the movie follows the individual characters, we discover that they are all desperately trying to somehow break free of the lives they have found themselves in, and once again the setting serves as a perfect metaphor: all the acting up seems hopeless in the face of a world that is frozen and static and provides barely any space for freedom and change, and all they achieve is hurting the ones they love. Ben Hood has an affair with Janey Carver that leaves him without the desired contact person for his problems and her, seemingly, just as bored as she is in her marriage. Left to their own devices, the children, trapped in this world created by others (and, in some ways, copying the behaviour of their parents), react with frustration (Wendy is both disgusted and fascinated by the Watergate trial, while her parents engage in a similar game of hypocrisy and deception), aggression (Sandy Carver, the younger brother, blows up his toys) and a disturbing withdrawal from life which leaves his parents helpless (Mikey Carver, amazed at the wonders of physics and geometry, trapped in his own head, and eventually, completely gone).
Tobey Maguire's Paul serves as a kind of narrator, but he is the only one whose stay in New Canaan, Connecticut is only temporary: after the Thanksgiving Holiday is over, he will return to his school. He is, in a way, barely connected to the exploits of the family, and watches from the distance, amazed at how things are falling apart but unable to do anything about it, and focused on his own interest in a female classmate (Katie Holmes). The only way out of that 1973 upper middle-class misery, it seems, is growing up and doing things differently. The Ice Storm succeeds in portraying these characters as individuals, but there is also a sense that the malaise they are suffering from is collectively shared by everybody in that place at that specific time.
The film ends in the destruction of one family and the potential mending of the other, as the ice slowly melts away.