Popular - You put up such a shell, honey. 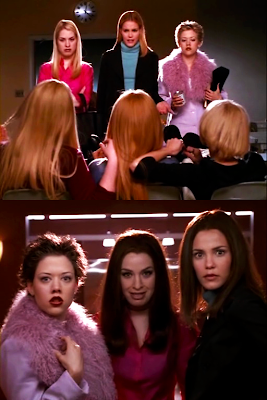 Popular: 1x19 Hard on the Outside, Soft in the Middle.
Another short review, sorry Lil’ Lily. This episode reminded me of how episodes of the Simpsons are usually structured: they start with something and then usually go off on a completely unrelated tangent. In the case of the Ryan Murphy (uh oh?) scripted episode, the episode starts with Lily giving a talk in a pre-school about her activism, since she will soon depart to Washington D.C. and get a “Student Activist of the Year” award. She is about to save a lobster from being eaten – but once she arrives at the Croutons, said lobster has already been devoured by “teen Cruella de Vil” Mary Cherry who successfully charmed the restaurant owner with her beautiful blonde hair. Continuing the theme of brunettes being defeated by the allure of platinum blondes, Brooke is the only one making it out of bio with an A (Lily gets an F for “a ten-paged single-spaced diatribe entitled ‘Mary Cherry must die’ – but Bobbi admits that it was “amusing”), because her report was “packaged better” than Sam’s, and in her interpretation of Darwin, it’s “Survival of the Prettiest”. Sam decides to prove that brunettes face discrimination in their daily lives by dying her hair blonde; Lily, after losing her lobster for the same reason, and Carmen, after her year-long struggle with Nicole, decide to do the same.

Sam: Brunettes are second-class citizens. By dying my hair I’m gonna prove that Brooke McQueen wins at everything only because of her golden tresses. Her power is strictly presentational.
Lily: Wait. What does she win?
Sam: Better grades. Boyfriends. She gets more meat. Bio isn’t the only place I suffer for my brownness. No, meal-time roles around and Brooke always gets a bigger pork chop.
[…]
Carmen: We’re proving that we can take your power, your men, your grades and your lobsters, by simply matching your whorish hair color.
Brooke: Our popularity is not based on looks. We happen to have good personalities.
Mary Cherry: We can turn our hair that hideous shade of early Barbra Streisand brown and we’d still rule this school, cause we’re witty, we’re smart and we’ve got asses that rock.

The Brunettes immediately turn into outcasts at school. The Blondes suddenly get better marks, more attention and, most importantly to Sam, more meat. They also, in one of those not really explicable turn of events, decide to disco-bowl for dominance (because for some strange reason the outcome of bowling is going to prove or disprove the theory that social hierarchies are based on superficial markers?)
The sad thing about the episode is that it’s Lily’s. But it mostly isn’t. Lily’s arc throughout the episode is the most serious and one that is actually relevant for her character development, but it’s buried under a lot of other stuff that isn’t going to be important in the future (with the exception of Mike’s proposal at the very end). Lily sometimes uses her activism as a shield, so as not to feel vulnerable and exposed, and that can make her seem unapproachable. AS THE GIANT LOBSTER IN HER DAYDREAM POINTS OUT TO HER.

Lil’ Babe: Actually, honey, the one you need to safe is yourself. You’re just like me, hard on the outside and soft in the middle. You put up such a shell, honey. I know you’re hurt cause you’re confused about your sexual identity and don’t want to be alone, I know you’Re hurt cause you feel your not quite..
Lily: Pretty enough to compete.
Babe: But you are pretty. Inside, Lily, where it counts. But if you don’t take off your shell nobody can see the blonde that’s within. I wanna live, Lily, but I want you to live, too.

The Blondes lose. Worse, Mike asks Jane to marry him, “let’s just do it and officially merge these two households”.

Random notes:
Conveniently, Poppy Fresh is absent from this episode.
Can we take a moment here and ponder that, while everybody was engaged in a little civil war and self-examination and teenage stuff, Lily was quietly saving the world AND working a soul-sucking job (off-screen)? This is how I sometimes feel about Rickie in MSCL, whenever Angela is mid-Jordan-monologue and he is patiently waiting for her to finish so he can maybe mention how he lives with semi-criminal relatives, a frightening uncle who occasionally breaks down his door and feels alienated because there are no other gay kids around. Perspective!
Keisha: Lily, what are the qualifications to become a bad-ass animals rights lady like yourself?
Lily: Thanks for asking, Keisha. Just be very tough and obnoxiously strident, that is the only way to make it as an activist.
I totally get that Bobbi Glass is not a main character and, to a certain extent, is written the way the story needs her to be, but I definitely prefer the version that sort of examines the travels and travails of her teenage students with anthropological interest (note: this is also my favourite version of that other, tracksuit-wearing sociopath in a Ryan-Murphy show…) to whatever she was supposed to be in this episode. Bobbi Glass, swayed by Brooke McQueen’s hair? I don’t really buy it. Maybe because she thinks it’s fun to pit her students against each other and watch the bloodshed that ensues, but not like this.
Also, UGH, Exquisite Woo. Really. Really?! I assume there are already loads of essays on racial stereotypes in Ryan Murphy shows, but this aspect of the episode (also it carries over into the following ones, so yay) is almost unbearable.
GET ONE THING STRAIGHT, WHITEST BOY ALIVE, YOU’RE NOT MY TYPE.
Sam: NEXT TO THEM I’M A SHADOW IN THE SHADOWS. I deserve to taste the big meat of love, I am not gonna let my faulty DNA define my destiny.
Nicole: Well that was sarcastic. Which I enjoy.
One of the few things that were actually funny in this episode: Mary Cherry is possessed by an earlier version of Barbra Streisand.
April Tuna: I loved you in Yentl!
Jane and Mike go along with it as well:
Jane: I feel…
Sam: liberated? Freed from the shackles of dowdy intellectualism? Dumb as a box of rocks?
Jane: Yes.
I just want to point out, because it feels important to do so, that Sam has never before, not once, made a connection between Brooke’s looks and popularity and her intelligence, and I really hope the writers never again come to the conclusion that Sam, an outspoken feminist, would think that pretty people can’t be smart BECAUSE THEY ARE PRETTY (or, worse, that hair colour has anything at all to do with it). Ugh.
In a tiny subplot, Harrison John (Jim Jarmusch’d) has a crush on the Chinese exchange student, the Chinese exchange student is in love with Sugar, and Sam developed a spontaneous crush on the white-haired version of Harrison John, creating one of those unfortunate chains of jealousy (this one is quickly resolved, also because the Sam-Harrison thing is never something that actually goes anywhere).
Obscure pop cultural reference:
The recurring theme song of the episode is Rock Lobster by the B-52s – here’s my favourite version of it, as played by Sleater-Kinney.
The porn-movie hair-dying was probably (HOPEFULLY) a parody of certain advertisements.
I’m sort of really smitten with the idea that Harrison gets Sam’s attention with his Jim Jarmusch hair.
at 19:58