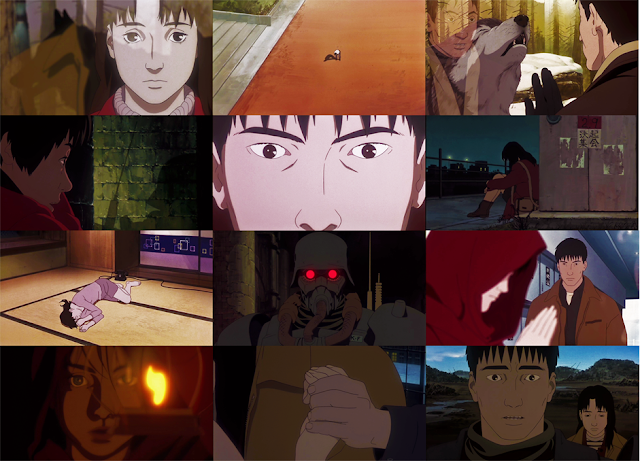 Tales of beasts getting involved with humans always end badly. Beasts have their own tales to weave.

When I'm with you I somehow feel like I'm hurting myself. When I see the same sadness in you, I start to dream. I wonder why.

There is one question that prevails in the many, many seasons that Canadian television show La Femme Nikita was allowed to run: can love exist in an environment that is conducive to lies, deceit and pretence? If the survival of the characters depends on them never revealing their true face, pretending to be someone they are not, following somebody else’s orders at all costs, can they truly have authentic feelings for somebody else? Can they be in love if all their energy goes into trying to stay alive in a hostile environment that denies their humanity, their individuality?
Hiroyuka Okiura’s Jin-Rô, written by Mamoru Oshii (Ghost in the Shell) asks a similar question: the main protagonist of the film is Kazuki Fuse, a soldier in a Special Unit created to battle a terrorist cell in Tokyo (in a fictional present in which Japan is a totalitarian country). Fuse finds himself in the midst of a power struggle between different government agencies. The organisation he works for is about to be dismantled and fights to survive. He fails to pull the trigger on a teenage terrorist in the canalisation of Tokyo and is sent back to basic training, and, while battling against his own trauma and his growing suspicion that he is fighting for the wrong side, finds himself caught in a vicious power struggle. He tries to make sense of what happened by connecting with a young woman who claims to be the sister of the girl who blew herself up in front of Fuse (the women and children utilized by the terrorist organization are called “Red Riding Hoods”), and they start to read a story to each other: the story of the girl who went into the woods and met the big bad wolf. The film leaves the role allocation open until the end; we don’t know who the girl in the story is, who the big bad wolf is, who truly waits to devour. There is a repeated argument that those fighting in the Special Unit have ceased to be human, that they are merely animals who may be able to live among humans for a short while but are ultimately doomed to bring destruction – and the interpretation of Grimm’s fairy tale continues throughout the movie, as Fuse and Amemiya read it to each other and see their own lives parallel the story. In the end, it’s a con in a con in a con. Amemiya was hired to corrupt Fuse, but Fuse knew about it from the start: he was vital in the power struggle of the Special Unit (and an elite unit within the unit, the mythical Wolf Brigade), and serves his purpose, in the end.
There is a terrible hopelessness to the movie: the ending argues that any emotional connection, that love, becomes impossible in the environment that Fuse exists in. He was nurtured to think of himself as a beast, as a soldier for a specific cause, and in the end, he can’t overcome his conditioning. Amemiya is just as trapped – the former terrorist just wants to leave, wants to leave the ever-changing city, the things that bind her, but she can’t run away because Fuse can not escape his destiny: he is forever the man who opens the gates to let the wolves in, trapped on the other side of the barrier that separates humans and beasts. In the end, the wolf eats up Little Red Riding Hood, and the huntsman is nowhere near to save the day.
1999, directed by Hiroyuka Okiura, written by Mamoru Oshii.
at 02:04