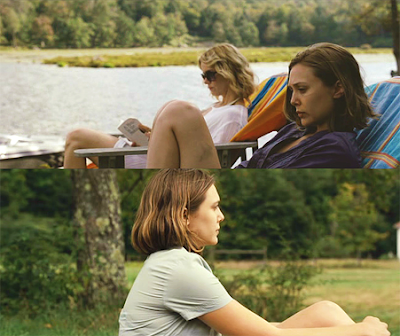 Lucy, is this from the past or is this now?

In the beginning of Sean Durkin's first full-length film, we see a group of women preparing food, waiting for the men to return from their work outside, and then quietly wait for them to finish their dinner so they can finally eat whatever they left behind for them. This is only a first look at the cult-like community the titular character, played by a mesmerizing Elizabeth Olsen, runs away from shortly after, but it already hints at the horrible things that will inevitably follow as we are immersed more and more in this place that John Hawkes' charismatic and quietly threatening character runs.
What follows then is a disorienting journey through two stories: one, about how Martha came to the point of wanting to run away, the other about what comes afterwards: her sister (Sarah Paulson) picks her up and drives her to an idyllic holiday home she shares with her architect husband (Hugh Dancy). What at first appears to be the beginning of a healing process soon starts coming apart at the seams: the disjointed way in which the two stories are told simultaneously (often leaving us desperately trying to figure out where we are by Martha's clothes and the interiors of the two houses) is an reflection of Martha's own perception and her inability to fit her experiences into the world her sister now asks her to inhabit: a world in which she has been missing for two years, one that she can't and doesn't want to fit in. The film explores the process in which she was slowly brain-washed by the cult: the stripping away of her identity ("you look like a Marcy-May", says Patrick, and thus Martha ceases to exist), the erasing of her individuality (all the women in the community share clothes), the subtle way in which the women are assigned to their domestic roles while the men are allowed to express themselves artistically, the brutal way in which the women are repeatedly drugged and raped and then told that this is not horrible; that this is beautiful; that this is how they truly become part of the community - and finally, how she and everybody else was finally fully integrated into this systematic abuse by making them complicit in both the interior and the exterior violence. This process leads to Martha's inability to fit in: slowly, the patterns she has learned start to emerge, her normalcy doesn't fit into her sister's, and this inevitably leads to conflict. As brutal as the portrayal of the community is, the true eloquence and horror of the movie lies in the way it explores the hostility and violence in the seemingly normal household - her sister does not realize that Martha's behaviour is a sign of trauma and mistakes it for the same adolescent antagonism that drove them apart in the first place, her brother-in-law reacts increasingly irritated when she questions his values and finally, sitting at the head of the table (like Patrick always did) tells her that she has no right to do so as long as she lives under his roof and eats his food. When it becomes apparent that Martha's issues are more severe than expected, they drug her in order to keep her quiet and threaten to have her institutionalized.
The brutality of Martha Marcy May Marlene is that there is no way that things could possibly end well, and even though the cult is horrible and destructive, the film also makes it very clear that there are more ways to be terribly wrong. It is a thorough portrayal of a young woman falling apart as her perception of reality becomes fractured (she asks her sister if she ever experiences the inability to distinguish between reality and dream - "no", is the answer, and therein lies their essential inability to communicate with each other) - who is also afraid that her escape may only be temporary ("How far are we", she asks her sister, "from yesterday"). Even though we follow her so closely, we don't get much closer to comprehending Martha than her sister does - and Elizabeth Olsen manages the stunning task of keeping Martha inexplicable, regardless of the intimacy the camera feigns.