Popular – Everything I touch, I destroy. 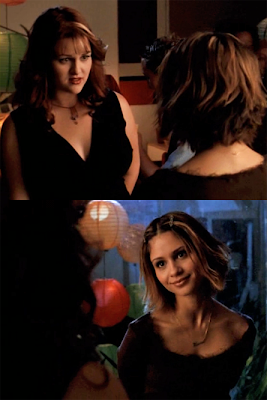 Popular: 2x02 Baby, Don’t Do It!
This is a state-of-the-art child simulation manufactured by NASA!
Upon watching the horrors of early 2000 music television (and apparently more specifically (Hit Me Baby) One More Time), Claw decides that her students are in desperate need of child-rearing-capabilities, and forces them to take care of unrealistically realistic dolls. This provides a frame for an episode that is all about parenting and responsibility. Brooke, despite Sam’s begging, has decided to leave and move to San Francisco with her mum, and Sam is left behind to pick up the pieces. There’s Mike, feeling like he failed as a dad because apparently Brooke chooses her mum over him (“You have been a great father, Mike, to Brooke and to me. I am so thankful for you. Brooke feels the same, I know that.”), there’s her mum, depressed because she’s lost Mike, and then there are her own feelings about losing someone she has just accepted as part of her family – and I love Carly Pope’s understated performance, because this is such a huge step for Sam as a character. She was so adamant about protecting her tiny family from this change, but she’s adapted – she’s started to enjoy the idea of having a bigger family, of including Mike and Brooke – and now that family is in danger, and she is fiercely protective of the things she loves, so she uses everything to try and keep everybody together.

Mike: I also realized at that precise moment that you and I were gonan be alright. We were gonna be a family.
Brooke: We are a family. Daddy, please, believe me. I’m not doing this to hurt you.

I think Brooke’s perspective on all of this is also very well conveyed (and acted by Leslie Bibb). She imagined this very moment of her mother returning for her, and now that she has this thing that she always wanted – a mother – she’s not willing to let go, even though it means placing all her trust in someone who has proved to be untrustworthy in the past.
Sammy resorts to kidnapping Brooke’s fake baby to keep her around – and Sam is this weird presence in the episode, always somehow in the background, observing, kind of trying to get people to do something (to get her mum to talk to Mike, to get Mike to talk to her mum, to get Brooke to stay), but we never really get an insight into her thought process. She doesn’t talk to her friends about this. She is isolated in her attempts to keep her precarious family together, and yet, Carly Pope conveys how much this means to her, how important it is to her to keep Brooke from leaving.

Sam: I found it in the hallway. I was going to give it back, then I figured I’d need every weapon at my disposal to keep you around.
Brooke: I thought for sure that it was Josh.
Sam: Because only someone who cared deeply for you would go to such lengths? Out there is one thing that I care deeply for, and that’s my family. And, for better or for worse, you and Mike have become part of it. Brooke, do me a favor: just consider carefully why you’re leaving, where you’re going, the history you’re repeating? I don’t know much about being a parent but there is one thing I’m certain of, a mother should never leave a child.

Brooke changes her mind. I think the episode leaves so many things open, and it isn’t really acknowledged that Brooke’s reasons for deciding to leave might be connected to her self-esteem issues, but the subtle way in which Sam tells her that she deserves better, that she deserves someone who is reliable and dedicated, is lovely.

Kelly: Did everything go as you hoped?
Brooke: Not really.
Kelly: I’m sorry honey. Sometimes it’s just the best to cut the ties quickly.
Brooke: I can’t go with you.
Kelly: Is this about Josh? Cause you shouldn’t let a boy stand in your way.
Brooke: Or a child. You left when I needed you most, when Charlie Sheinberg dumped me, and I thought I would never like another boy. Or when I cried uncontrollable at my first debut pep really because I didn’t know what my period was. Mom, you don’t get to skip to the good part when you weren’t around for the bad
Kelly: Brooke, that’s unfair, I’m doing my best, I just need a little time to catch up with things.
Brooke: I know. I guess I’m saying that I don’t… need another parent. I already have one and he’s doing a great job.
Kelly: So that’s it? All that talk about being so happy to meet me again, all that joy in your face. That means nothing anymore?
Brooke: I love you. And I’m so glad that I got to know you. And I know that we’re gonna be in each other’s lives now. But just see I spent years and this enormous amount of time and energy just wondering. God what are you like? And just hoping that you would show up. And you did. And I’m so thankful for that. But now I can stop. Now… It’s my turn to leave.

So Brooke gets closure. She gets closure because Kelly indicates that she left because she felt like the child she had held her back – and when Brooke realizes that Kelly still has this idea in her mind, that this isn’t something of the past, she makes the decision of staying, because she needs to make sure that SHE’LL be okay.

Brooke: It’s true, you know. You are the greatest. I’m sorry it took so long for me to realize it.
Mike: You’re home.

And then there’s Sam, standing outside, observing the thing she didn’t destroy but helped fix.
We’re Eminem. We’re Emory’s sisters.
Brooke’s decision to leave leads to a power vacuum at the top and several parties struggle to fill it: Carmen wants to change the social hierarchy of the school, Mary Cherry and Nicole form a doomed alliance to occupy the open space, and Emory’s two sisters also try to get a piece of the cake by using Mary Cherry and Nicole’s power (“You two have become icons to our young generation. Your exploits are mythic.”). At first, they just pretend to desire a similar position within their own age group – but eventually, they try to take over Brooke’s spot, which only fails because they are younger and therefore by definition more powerless (the threat of calling their parents still works, while Nicole and Mary Cherry are, well, pretty much beyond any kind of parental control at this point). I know that this plot was only meant to be the humorous uplifting part of an episode that has a pretty depressing core theme, but I really enjoy Popular when it tries to investigate how power works in the specific habitat that is high school. Vacuums always lead to struggles and conflicting ideals clashing. Uneasy alliances are formed, and eventually, and interestingly, the least likely characters come to the conclusion that they prefer not being the ones in power because it alienates. “It’s lonely at the top”.
Random notes:
The creepy twins from hell are apparently both played by Alessandra Toreson aka Alessandra Torresani aka Zoe fucking Greystone.
Lily remains child-less (“I don’t think you’ll get pregnant”, says Bobbi) and Carmen suggests sharing, which leads to a really adorable subplot in which Carmen tries to use the power vacuum to create an environment more conducive to general happiness while Lily becomes an increasingly more frustrated stay-at-home mum who eventually snaps. This was both cute and an interesting twist on the roles Lily and Carmen usually play – with Carmen being the social activist and Lily the care-taker. Also, their friendship is one of my favourite things about the show and it’s nice to see that SOMEONE remembers it.
Mary Cherry: What can I do to restore our dysfunctional sociopathic friendship?
Nicole: Let me smack your smug face as hard as I possibly can.
Mary Cherry: Fine. Even Steven?
Mary Cherry / Nicole: WE ARE FINALLY FREE. Free of the tyranny of kindness and compassion! Free to be you and me!
Nicole’s syllabus of power: The Art of War, Machiavelli, Joan Crawford.
Carmen: Spearheading a movement for social change is tough.
I was a little bit upset about how the episode tried to use the idea of child abuse as a punch line so let us all pretend that the fake English nanny never happened.
Mary Cherry: Information is the currency of power.
The boys are portrayed at being considerably more committed and successful at taking care of their babies.
Obscure pop cultural reference:
Probably not really obscure, but Carmen’s inability to take care of her and Lily’s doll leads to a Potemkinesque sequence of horror.
One of the kids Carmen invites to her conference on how the power vacuum might be filled with unicorns and rainbows carries a “Bring Back Freaks & Geeks” poster – which, considering the lovely presence of similar pop cultural slogans at the OWS protests, is pretty awesome.  Freaks and Geeks was cancelled just before the second season of Popular.
Nicole and Mary Cherry’s invitations to Eminem’s party of the year are a reference to Barbara Kruger (“Your Body is a Battleground”, “I shop therefore I am”).
at 00:14

I've just watched again the whole 2 seasons of Popular, and I'm enjoying a lot your reviews and comments about the episodes ;)

Thanks! I'm really enjoying my re-watch of all the episodes - I haven't seen some of them for more than ten years I think.