Popular - Judging people on any superficial level is still bigotry where I come from. 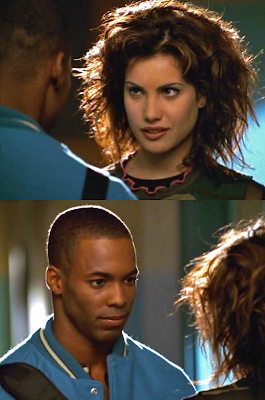 Josh’s mum is currently unemployed and conversing with psychics about her future, not exactly to Josh’s delight who finds it hard to be “the leader at school” and then to come home and being in charge as well, plus being the bread-earner of the family, “which frankly is not a role I thought I’d have at seventeen”. Josh’s coach offers to help him out and gets his mum a job as the guidance counselor – because how could nepotism possibly be wrong if it is all about “helping a friend”?
George Austin turns up in school a month after the new year started and immediately starts to compete with Josh for the top spot on the football team – and additionally, he questions Sam’s prejudices against athletes, successfully, because she ends up asking him out instead of writing an article revealing how he was recruited. On the one hand, this is an unsuccessful return to a storyline that didn’t work very well in season one (where Sam writes about an issue for an article and is complete right about everything except the show wants us to think that she isn’t, that she is only using the idea of objectivity to pursue some self-righteous agenda – and what perfect timing, because really, jock culture IS and issue in American high schools and colleges).

Sam: I was referring to you as an athlete, not as a person of colour.
George: Is that right? Well I wouldn’t go bragging about it, Sam, judging people on any superficial level is still bigotry where I come from.
[…]
Sam: I feel terrible about how I acted yesterday, sorry. I know there aren’t many African Americans at this school and I should have thought about my language and realized how alienated you must feel here. Don’t hate me because I acted like a moron.

George has a point when he calls Sam out on approaching him with her mind already set, but on the other hand, Sam is right too: Coach getting Josh’s mum a job isn’t right, neither is George being recruited, regardless of how good a guy he is. This sort of puts a damper on Sam’s big insight:

George: Don’t you think a lot of people could wind up getting hurt from that article? Josh is going through a tough enough time as it is.
Sam: How can you so blindly defend someone who tried to stab you in the back? Look, I don’t want to hurt Josh or his mother but –I’m a reporter and I have an obligation to the truth.
George: If it’s the truth you want so badly, how about this: I was recruited.
Sam: So what you told me in the cafeteria was a lie?
George: Not a lie, but not the complete truth. The exchange was an opportunity to excel at a better school. Better high school lead to better scholarships at better colleges. Put that in your story. I mean, if you wanna ignore all the human circumstances and do what journalistically righteous then take the Fords and the Krupps down, but take me right down with them.
[…]
Sam: I was named editor of the paper when I was a sophomore. Some people may think that I got it too young or as a result of favouritism but I always told myself it was what I did with the position that mattered, not how I got it. For almost two years now I’ve used this paper to rail against divisiveness at this school. If I run the article I’ll undo all the good I was trying to accomplish so I killed the story.
George: Good for you, Sam.
Sam: And also I realized if I ran an article about all the taboo breaking around here I’d be a big fat hypocrite since I’m about to break one myself.
George: I’m confused, what taboo are you about to break?
Sam: The one that says ‘reporters don’t date their sources’.

I mean, I get the point of all this, humanizing Sam by making her choose George over her journalistic ethics (and George seems like a genuinely good guy, too) – but on the other hand, it’s not like Sam is wrong, and it rubs me the wrong way that this is presented as a moment of character development since she chooses George over her ideals – when in fact, she is completely right in accusing the establishment.
In order to get back on the squad, Nicole decides to collect potentially incriminating material on Vice Principal Krupps (“Gunther”), and enrols Sugar’s whole bathroom-infiltrating awesomeness as well as the power of video editing. Things go wrong, and she ends up being benched for the rest of the year.

Josh: So what’s your crime?
Nicole: Doing anything and everything to wear a cheerleading uniform, so I won’t feel like the formally fat loser who always got annihilated during dodge ball. Mary Cherry was right: in high school, the biggest taboo of all is being unpopular. God, we’re such losers.
Josh: Hey, speak for yourself.
Nicole: You’ll do fine, Josh. People like you. I’m not liked, I’m feared and without that Glamazon armour I’m nothing.
Josh: I think if people saw you like I see you right now, completely real like I’m seeing you for the first time, you’d be surprised at  how people won’t call you a bitch to your face.
Nicole: You think?
Josh: I guarantee it. Until we figure out how to reinvent ourselves, do you wanna grab a slice at Greeto’s, we can eat for cheap.
Nicole: Yeah.
Josh: Cool.

This episode is about taboos: Sam is tries to figure out if breaking the taboo of talking about how football culture is quietly destroying Kennedy High is more important than caring about the individuals she might affect. Josh is trying to navigate his various precarious positions – getting his mum a job, accepting that she is dating his coach, providing for his family and attending practice – and Nicole is ALWAYS struggling with popularity, because being popular is her shield, it protects her from actually having to reveal anything personal about herself. Her protections is stripped from her involuntarily, and the question is: who is Nicole if she can’t hide behind her social status? The interesting thing about her development in this episode is that the storylines starts out as the typical B-plot of any given Popular episode, the thing that makes light of whatever serious issue the episode is trying to tackle – but in the end, Nicole gets the serious moment of insight.
Random notes:
I kind of feel bad for making George’s episode a short!cap because he is possibly one of my favourite characters – but then, he is easily likeable since he lacks all the wacky attitudes most of the other characters have (he almost seems like he secretly belongs into a different show altogether).
“What have you done to yourself, Frankenteen?”
Mary Cherry: Nic, did you know that 14 percent of all plastic surgery is done on teenage girls? I’m part of yet another socially repulsive trend!
“And to think I found you attractive enough to blackmail!”
“This has the foul stench of an Esposito resurrection.”
Sugar: I guess my shower scheme was more clumsy than convincingly homo-erotic.
Nicole: Josh… Thank you. Also, when I told you earlier that you could tell everyone I was crying I was kidding. Spill and there will be blood on the floor.
Obscure pop cultural references:
Bobbi Glass: Wake up from your Napster-induced delirium and let’s put it together for Mister George Austin.
Anthony Montgomery aka New Guy was on Enterprise, the doomed final Star Trek series.
Mister Jenny Schecter plays the football trainer. I don’t know what it is about Eric Mabius that makes people want to cast him as coaches.
George: You’ve got a nice smile, Lois Lane. It’s toothy.
The glorious generation-defining Presidential elections of 2000 were all over the episode. Oh man. Sometimes I wonder where we’d be now if things hadn’t turned out the way they eventually did.
at 07:32