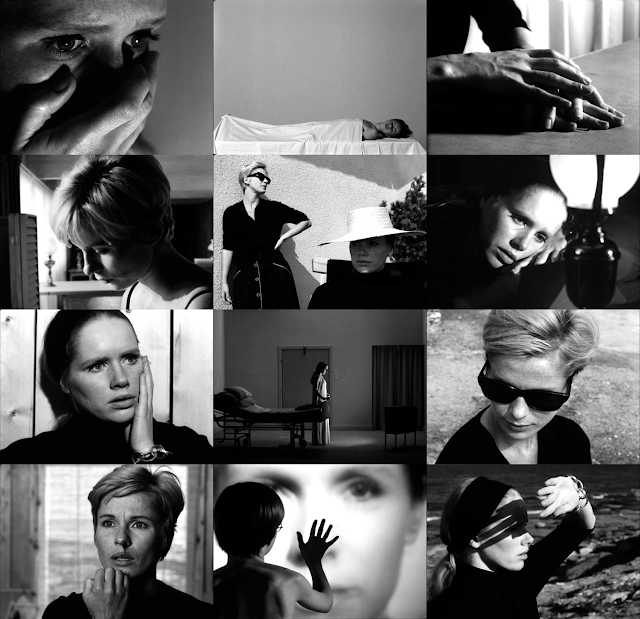 In her essay on Bergman’s Persona, Susan Sontag argued that it makes more sense to regard the film as a “theme-and-variation narrative” than as a “linear story”. Any attempt to recount the story of the film runs into difficulties once it needs to account for the breaks or the question of what is “real” and what is a dream within the narrative. More profoundly, this approach has no answers to whether Elisabeth and Alma are two separate characters or in fact two aspects of one person suffering through some kind of a crisis.
The reason for Elisabeth Vogler’s silence is one of the many things that do not receive a definite answer in the film, even though Bergman presents several theories: the most articulate is voiced by her doctor in the beginning, right before the patient leaves with Alma, the nurse.

Don’t you think I understand? The hopeless dream of being. Not seeming, but being. Conscious at every moment. Vigilant. At the same time the chasm between what you are to others and to yourself, the feeling of vertigo and the constant desire to at last be exposed. To be seen through, cut down, perhaps even annihilated. Every tone of voice a lie, every gesture a falsehood, every smile a grimace. Commit suicide? Oh no. That’s ugly, you don't do that. But you can be immobile, you can fall silent. Then at least you don't lie. You can close yourself in, shut yourself off. Then you don't have to play roles, show any faces or make any false gestures. You think... but you see, reality is bloody-minded. Your hiding place isn't watertight. Life seeps in everything. You're forced to react. No one asks if it's real or unreal, if you're true or false. It's only in the theatre the question carries weight. Hardly even there. I understand you, Elisabeth. I understand you're keeping silent, you're immobile. That you've placed this lack of will into a fantastic system. I understand and admire you. I think you should maintain this role until it's played out, until it's no longer interesting. Then you can leave it. Just as you bit by bit leave all your other roles.

The doctor interprets Elisabeth’s silence as an attempt to lead a completely authentic life, one that lacks the pretence and falseness of both the theatrical and the real world. The sentence about reality and theatre seems to point beyond the situation itself; it is a statement about Persona as a film, perhaps even about Bergman’s notions about storytelling. The conclusion is damning, though: in this interpretation, Elisabeth is desperately trying not to play a role, to be instead of seeming, but even that inevitably becomes a performance.
The doctor sees this as a choice – visually, the film also raises the possibility that Elisabeth’s silence is a reaction to the – unspeakable – horror she witnesses. In one scene, she watches a news report on the war in Vietnam and cowers in a corner of the room, but the light of the television is inescapable. She reacts similarly distraught when she finds a photograph of a boy in the Warsaw Ghetto. Alma reads a passage from a book to her when they are at the beach (a passage presumably invented by Bergman, not actually taken from an existing text) – “the howl of our faith and doubt against the darkness and silence is one of the most awful proofs of our abandonment and our terrified unuttered knowledge.” – and when asked if she agrees with this sentiment, Elisabeth nods.
The third possible explanation comes from Alma. In a sequence that is repeated so the viewer sees both faces, both reactions, an angry Alma – angry because she feels like Elisabeth has betrayed her by sharing a secret she thought safe – the nurse tells a story, and it remains open if this is a theory she has, or something she has found out, or perhaps the whole scene is only Alma’s dream, the result of something she witnessed early into her relationship with Elisabeth (when she violently tore apart a picture of her son that was enclosed in a letter from her husband). She claims that Elisabeth, the successful artist and woman, tried to refute the claim that she lacked motherliness, became pregnant but in the course of the pregnancy more and more revolted by the idea of becoming a mother, so that her reaction to her son being born was violent rejection. In Alma’s interpretation, Elisabeth’s silence is a reaction to her inability to love her son and her son’s unconditional and unrequited love of her.
There is no definite answer to the question of why Elisabeth is silent, but the film shows what the situation she creates with her silence causes. It causes awkwardness, a necessity, in her counterpart (Sontag calls the silence a “provocation, a temptation, a trap”). From the beginning, Alma struggles to fill it, and she soon realizes that her superficial self-definition (a young nurse with a fiancé) isn’t sufficient, so her explanations and her stories become more detailed and personal as the film progresses. Alma enjoys finally being listened to rather than being the listener, but the crisis begins after Alma shares a story she has never told anyone, one she tells precisely because Elisabeth is a stranger and her silence somehow promises that it will remain a secret. This event in her life, the seduction of a young boy, the unfaithfulness to her fiancé, the eventual pregnancy and abortion, is something she is deeply ashamed of, but at the same time, it is a burden she carries alone and sharing it by telling promises some kind of relief. The nurse realizes that this promise was false when she reads a letter Elisabeth sent to the doctor in which she describes what happened and mentions that she enjoys “studying” Alma, who in turn feels betrayed and used, a feeling that escalates when she provokes Elisabeth to hurt herself on a piece of glass on the floor. The idea of reversed roles is prominent: Alma is the nurse, the care-taker, the provider, and yet, throughout their stay at the cottage, Elisabeth takes up that role when she becomes the willing listener (and is physically affectionate towards the younger woman). Elisabeth is supposed to be the patient, but she becomes active when she articulates that she regards the other woman as someone to be studied. Their struggle with their assigned roles becomes a power play about the silence itself, once it is no longer an opportunity for Alma to share her insecurities but a provocative experiment.

Must it be like this? Is it really important not to lie, to speak the truth to talk with a genuine tone of voice? Can one live at all without talking freely? Lie and deviate and evade things? Isn't it better to allow yourself to be lazy and sloppy, untruthful? Maybe you become a little better if you just let yourself be who you are. No, you don't understand. You don't understand what I'm saying. You are inaccessible. They said you were mentally healthy but your madness is the worst. You're acting healthy you do it so well everyone believes you. Everyone except me, because I know how rotten you are.

It is, in fact, broken several times throughout Persona (but again, the distinction between reality and dream is not clear, neither is whether Elisabeth in fact speaks) – once, Elisabeth tells a drunk Alma to go to bed so as not to fall asleep on the table, once, Alma forces Elisabeth to speak by threatening to throw a pan of boiling water in her face (“don’t hurt me”) and finally, when they have returned to the hospital, Alma forces her to repeat only one word: nothing.

I think I could turn myself into you. If I made a real effort. I mean inside. You could turn yourself into me just like that. Although your soul would be much too big, it would stick out everywhere.

Are Alma and Elisabeth two separate people? Is Elisabeth the vampiristic artist feeding off Alma’s experiences for her next role (or is this merely how Alma feels?) Is Alma a threatening and demanding creation of Elisabeth’s mind, an antagonist, a counterpart – or is Elisabeth the person Alma fears to become (“We'll see how long I hold out. I'll never be like you, never. I change all the time.” She declares towards the end)? Persona provides no definite answers.
1966, directed by Ingmar Bergman, starring Bibi Andersson, Liv Ullmann.
at 07:07