Reaction Post - You have a failed romantic notion that what you are running here is a family. 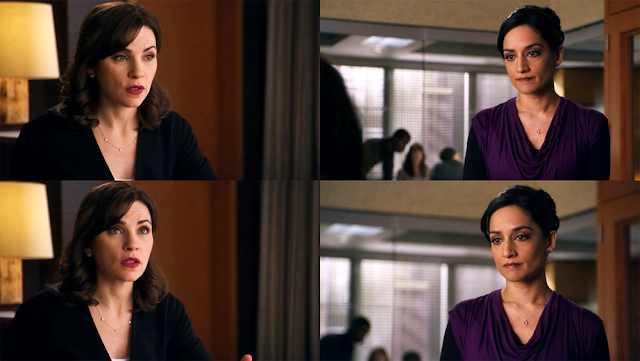 Wow, what a great start into the new year! This is my favourite episode of the show this season, and I am trying to figure out what exactly has changed - and if anything, it's a subtle thing. Everything just came together perfectly in the episode. The case-of-the-week was about the firm itself and connected many points previously made: the firm is struggling financially, regardless of how often Diane chooses to call it a "temporary problem", Eli doesn't play well with the other kids, David Lee doesn't care about rules, Diane, often blamed for her idealism, DOES know how to run the firm and how to deal with her partners' difficult personalities (my favourite part about this was how the partners were set up like quarrelling children and Diane as the one sensible grown-up telling them to just stop - and surprisingly, Eli and David did stop, regardless of their individual plans for revenge/taking each others' power).
Lockhart & Gardner are haunted by an old divorce case when the couple, meanwhile reconciled, decides to sue them for "alienating affection", some kind of relict from olden times when marriage was still sacred. As things progress, it turns out that loads of people in the firm have screwed up: David asked Kalinda to hire a prostitute (But not to sleep with him! Just to help him acquire a DUI! - "You have such lofty goals when you start a law firm. Dreams of fighting injustice, righting wrongs.", muses Diane), Julius messed up when he helped the wife sell the firm, Alicia (then still new at the firm) misplaced the one vital piece of paper that would solve all their problems.
The episode also succeeds at being light-hearted while shedding a foreboding and terrifying light at the practices within the firm: David Lee doesn't hesitate to perjure himself in order to stay out of trouble, and he asks her to do the same (and, because she isn't the same woman who misplaced the rider two years ago, she kind of does). He weasels a signature out of her in order to forge the document they are missing - and that whole thing just brought out the best scenes of the episode. Kalinda realizes that Alicia could end up being the one responsible and her face just tells you everything you need to know about how much she cares about her, especially when she sees Alicia's reaction to realizing that she may in fact have lost the rider, or never even signed it in the first place. She immediately (and absolutely devastatingly) insists that Alicia should lie about not remembering because there is nothing else she can do ("I'M GONNA WRITE THIS DOWN AS A YES") - but then, david ex machina and the document is found - except Alicia realizes that she didn't really sign it, that this is all part of David's game. And Kalinda realizes that Alicia realizes, and faces-wise, this whole scene is just absolutely stunning. David Lee's reaction too - he knows that Alicia knows, and he is essentially grinning inside because now he has made her complicit in this because really, nobody gets away clean in the end. Diane tells her that it's not really wrong because she doesn't REALLY know, not in the judicial sense, but they both know that it's at least morally questionable and to top things off, Cary is disposed (and expected by the opposing side to disqualify the document) and does the unexpected honourable thing, even calls them "outstanding, competent, ethical attorneys".

Alicia. Thank you
Cary: You're welcome.
Alicia: I... I don't get it.
Cary: Oh wow.
Alicia: What's so funny?
Cary: Things change.

Back in the first season, when Cary and Alicia were competing for the same spot, Alicia didn't rat him out when he came to the office high - and, wondering why Alicia wouldn't take the opportunity to destroy his chances, they had a conversation about not actually hating each other, about how this story with the scorpion that inevitably kills the frog because it's in his nature is only used to excuse bad behaviour. Maybe I've just chosen to ignore it before, but this is the first time that I really do believe that Cary enjoys being on the other side for once because it allows him not to have to make these choices. He realizes in the conversation that the document probably was forged (because why would Alicia be so grateful if she didn't doubt the provenance?). I think Cary really enjoyed walking out of that room clean, and Alicia absolutely hates that she can't.