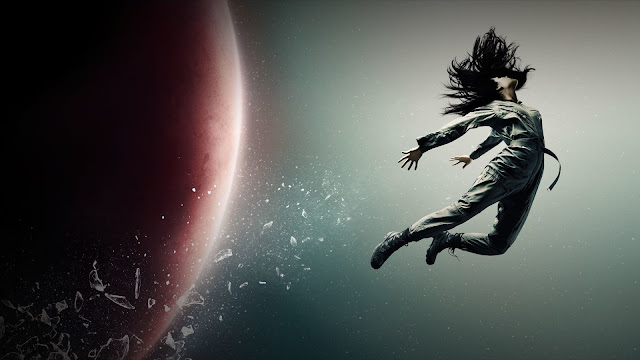 In Octavia E. Butler's Parable of the Talents, Olamina, the heroine of the story, dreams of a future where humanity focuses its talents, its aspirations, its resources, on travelling to the stars. It's an idea that seems even more ambituous if not far-fetched considering the poverty and political discontent in Olamina's present - an idea that is an idealistic utopia, which nonetheless comes to fruition at the end of the book.
The Expanse is set in a future where humanity has colonised Mars and is extracting valuable raw materials from the minor planets and asteroids in the belt surrounding the planets of the solar system - and where Butler's novels were an imaginary journey into a future where humanity overcomes its own limitations to spread into the stars, the reality of The Expanse is a very rude awakening (as would have been Butler's actual sequels to her first few books, had she had the chance to complete them). Instead of leaving ancient conflicts behind, or developing beyond the deadly ideological rifts of Earth, humanity is still profoundly divided. Mars, a colony defined by the lack of essential necessary elements like water and air, has fought hard for its independence and is ideologically opposed to is wasteful and decadent mother planet. The Belters, the proletariat of the future, feels exploited by both sides and is eager to establish its own independence from a very literal, physical subordination - growing up in zero-gravity circumstances means a dependence on under-the-table medical procedures and the incapability of surviving on Earth, due to fickle bones and the bad health of a social class that has been bred for hard work away from the planets it sustains. The show is very good at connecting this kind of world-building - sketching the political and idealogical conflicts - by portraying characters who can't help but be caught up in those conflicts. Not unlike the critically beloved Stranger Things, the show follows three distinctive storylines which are interconnected, but each part of one particular pop-cultural genre.

In the show's first season, three storylines eventually converge into one narrative: Joe Miller (Thomas Jane), a cop (except policing, like almost everything else, is a privatised enterprise) is a Belter, and set on his own course when his boss throws a private case his way. A disappeared woman, Julie Mao (Florence Faivre) daughter of an influental man, has disappeared into the complex network of a freedom figher/terrorist network. Instead of following the path set out by her father, she has decided to join he ranks of OPA, an organisation eager to free the Belters of their subjugation with any means necessary. In this film noir narrative, he digs deep to follow her trace, but eventually finds her caught up in the same vast conspiracy the other protagonists of the show are trapped in.

In the science fiction narrative, Jim Holden (Steven Strait), and unwilling first officer on a company ship that supplies water to the Belters, and his rugged team of survivors (a beautiful cast of shipmates featuring Dominique Tipper as the Belter highly suspicious of any radical ideology, Naomi Nagata, her very loyal follower Amos Barton, played by Wes Chatham, who lacks him own moral compass due to his still-to-be discovered history and orients himself towards her, and the pilot Alex Kamal, played by Cas Anvar, who used to be part of the Martian Navy) accidentally stumbles across a plot to escalate the cold war between Mars and the United Nations (which are not not unlike the Federation of Star Trek in the Deep Space Nine interpretation - a morally ambiguous powerful organisation willing to tolerate and perpetrate torture to reach its goals). Holden, haunted by his own idealism and always attempting to see things through to the bitter end, which always costs the lives of those he cares about, follows an SOS call from a ship, which eventually leads to the destruction of his own ship and crew, but he can't help but keep going down the rabbit hole until he finally comprehends that the forced behind what is happening go deep into the power structures of his world. This particular storyline is dominated by the sheer horror of space - the constant threat of running out of oxygen, of being trapped in a place that is inherently unwelcoming to humans. This is the storyline that is the most realised, the most enchanting, as his crew fights for survival but also constantly decides between its own survival and an idealistic idea of uncovering evil. This is where The Expanse is at its best, when it portrays characters who are deeply influenced by where they come from, but find a new, sometimes awkward companionship and family among themselves. Amos is maybe the best example of a world that isn't the idealistic future that some science fiction writers may dream about - the product of a brutal, violent childhood, yet constantly attempting to become better by following someone with a better moral compass than he himself possesses (and yet always pragmatic and willing to use violence for survival). Of course this is very close to the world that Octavia Butler portrayed, as well - a world where the conflict between idealism and violence, survival and doing good, is never far away.

The third storyline is that of Chrisjen Avasarala (Shohreh Aghdashloo), a United Nations official attempting to avoid the escalation of the Cold War between Mars and Earth, but realising with every steps she takes that other forces are working against her. This storyline creates the political reality that all other characters are navigating - the big power politics that set the stage for everything else that happens, but never really reach deep enough to make the individual decisions of characters irrelevant. This world is driven by both, in ways, the diplomatic and political decisions made at a level of privilege and power, and the decisions of individual actors within that universe that drive the plot forward incessantly, because The Expanse is never pessimistic enough to argue that individuals do not matter, not even in the vastness of space.

This is the ultimate science fiction show for this century, where the idealism of space travel, the idea of finding new worlds, is rooted in the environmental destruction and the power politics of the world that we know now - where the ability to travel new worlds never overcome the limitations of the human condition. The perils of being a worker trapped in the exploitation of the economic conditions never ceases, and the wonder of encountering other species in space turns into the horrors of a virus that terminates life as we know it, sent by a species that no longer exists but is brought into relevance by scientists who are willing to kill people for their dream of a better future for humanity, but not for individual humans.

It is the same conflict that dominated Battlestar Galactica, and Olivia Butler's Parable - between the idealism and extremism of an ideological idea about the future of humanity, and the very individualistic and human desire to have a good life, or the best life possible, and to save the lives of loved ones. Visionaries perpetrate violence and commit genocide, while individual characters make constant decisions between saving their own skin and going beyond their instincts to protect others and preserve their dignity.