Some thoughts on 'Playtime' 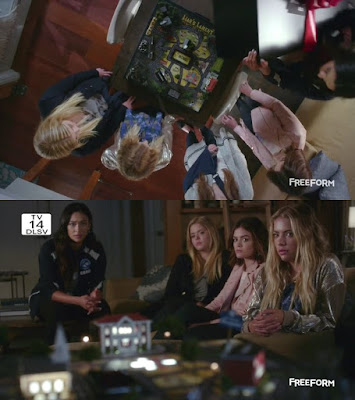 I am very cautious about this last season, and this last half of the season, because at some point about two years ago, this show had a glorious streak of episodes that gave me hope it would become the show it always had the potential to be - and then it didn't. But, nevertheless, I couldn't stop thinking about this episode after watching it, and Pretty Little Liars has been with us for such a long time now that it's impossible to leave behind so close to the finishing line.

And there is a certain beauty to the fact that the plot device that will get us there is a tiny murder model of the very town that has captured our Liars. They tried to leave (everyone except Alison, who is bound to Rosewood like a ghost, I guess), but were all called back. They tried to be successful in the outside world, but in the end, they couldn't escape. And now, they've been sent a literal tabletop game version of the life they've lived (for how long - about seven years, as well, with the time jump?), and it is asking them to play. At first, they refuse, but in the end, and so eloqently throughout the episode, not one of them can escape who they are (which, in most cases, is someone gloriously, shaped through trauma but also incredibly strong, but it still inevitably ties them back to Rosewood).

Of course Spencer will try to play, and win the game, without telling the others. Of course it leads down a dark path where she finally asks the question of her chronically un-motherly mother (and of course she was biologically tied to all of thi all along, and has been Alison's cousin this whole time).

Of course Aria will go off on her own thing, half-assedly planning a wedding to someone who has, for years, lied and spied on her (did they bring back Holden specifically for that "of course you would think that was normal" reaction, a bit of a self-assessment on part of the show for its conistent failure to call Ezra out on his bullshit instead of giving him redemption arc after redemption arc (the biggest lie of this show is that getting shot for someone pays off grooming an underage girl into a relationship and then never, ever letting her go).

Of course Emily is too busy trying to save everyone again so that it doesn't even occur to her that in your early 20s, you shouldn't somehow end up in a small room with two of your ex-girlfriends who are both problematic in their own way but only one of them has haunted your life like a spectre and almost bullied the other to suicide. She wants to save both of them, and that has always meant not really being able to help either of them on their way - Paige almost managed to get out of this helltown, but now she's back, and Alison still can't admit what she wants (or what the show decided she wanted all along, because if she didn't, all of this would fall apart). Fingers crossed Paige McCullers is the one who gets away, but it isn't looking good for her. Imagine almost making it out alive and then coming back to have that same old argument about what specific thing ruined your entire relationship again, with Alison looming over all of it.

I'm trying to imagine a way out at this point, for Spencer who is trying to make sense of her entire life (with Toby in hospital waiting on the bedside of his severely injured fiance - Toby never wanted to leave, but then he did, and got punished for it). The mother who's love she's always doubted was never her biological mother to begin with (which explains A LOT about Mrs Hastings). She still tries to win games that she shouldn't even be playing. Alison is pregnant (and Emily's eggs have disappeared...). Aria is planning to get married to Ezra Fitz.

Maybe we have to put our hope in Hanna (of course we should), who in a stark contrast to Spencer's instinct, tries to stick a knife in the thing that is tormenting them to see what is inside, instead of just accepting being dealt a few manipulative tricks here and there. It should be the message, that trying to play the game that has incomprehensible rules that were never made for you is never a good idea. I've thought a lot about Hanna after the episode, and the way that her course in life fluctuates between Caleb and Mona. Like - Caleb's love for her is deep, but it wasn't unconditional, because the way he phrases it now, her ambition ruined them. She wanted something, something that was far, far away from Rosewood, and he couldn't deal with it. Which is fair game for both of them - Caleb wanted her to be around more, she wanted a relationship that supported her ambition. But then there's Mona Vanderwaal, who's reaction to seeing Hanna's ambition is throwing every single thing at her disposal (which is a lot) towards it, to make the impossible happen in that genius way she has. And (not so secretly, I guess) this has always made the show work for me, the way it started with how sad Mona Vanderwaal was that the girl she loved most in the world was abandoning her for someone else. Hanna isn't defined by how much these two opposite people love her (it's not toxic, like with Aria, and it doesn't require her being a selfless hero, the way it does of Emily), but she has made herself so strong not just around all the terrible, horrible, fucked-up things that have happened to all the Liars, but also around the love and support.

I have a hard time imagining the ending of this show much differently than the way Sunnydale ended, a crater in the ground (and I've been trying to figure out how that whole "sharing powers" thing would work in a Rosewood context, rewriting the rules, but also at the same time in a problematic way because once again, they apply to people who didn't really have a choice in the matter). I don't think that anyone can win this game if they play by the rules, as much as Spencer will try her best. I'd like this season to be about Rosewood, and it should be, considering that the town has literally been turned into a centrepiece. Every cop is corrupt. Ezra Fitz is a respected writer. Mr Hastings got away with this shit for years. Radley kept the indiscretions and secrets of the town locked up for decades, and wreaked havoc on the lives and minds of its patients. There is no outside anymore.