Orphan Black – I have a right to know. 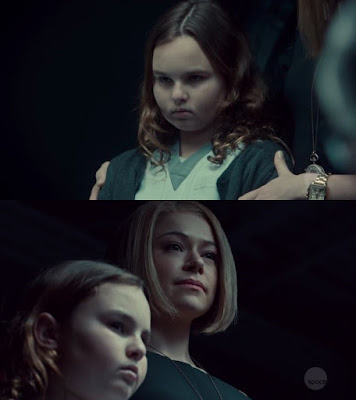 Kira: Are you okay? Who hurt you?
Rachel: All of them.

Rachel Duncan was the child of the forefathers of evolution. Ethan and Susan Duncan created Neolution, created Dyad and Castor as we know them now, their science essential for the present, and they created their daughter – and then gave her, willingly or not, to the behemoth they had contributed all of their research to. They gifted her back to the organisation that had designated her proprietary information, so that she was raised by Aldous Leekie, presented as a gift to the board, with nothing but shaky videos to rely on for any happy memories of her childhood. Nothing remains untainted, because Rachel Duncan knows exactly where does videos lead and where the woman that she thought her mother has guided her.

The one thing that would justify all this dread and suffering, that would justify all that Rachel has endured, would be freedom and the ability to decide her own fate. If she had truly earned a seat at the head of the table, if she had truly turned the table around on those suited men that so curiously examined her when she was a child, it wouldn’t have been for nought. She recited her ID number, and that of her sisters, and later, after accepting that the prodding would never end, that she would never get to choose, or have any right to the answers to her questions, she started going against her own sisters to own herself. She killed a clone so she could give all the information she could find to Leekie – but instead of impressed, he looked at her, horrified, like an experiment gone wrong, because she was never meant to want power, or to contribute in that way.

This is who Rachel is. There is nothing that is more important to her than being taken seriously, than being considered an equal, than having control over her own fate, and there is nothing she would stop at to achieve that goal. When Westmoreland gave her her current position, he promised her all he could, but she is now slowly coming to realise that none of it meant anything. Signing that document to regain autonomy meant nothing, because the second that Virginia Coady is back in the fold, she again is being prodded against her will, with no determination of who does the prodding or when, or any access to the results. These suited men care for nothing than the bottom line, or maybe a close relative who is suffering. Whether or not Rachel and her sisters are treated as individuals does not matter to them, and Rachel doesn’t gain any privilege out of being raised within Dyad, with a full understanding of her own existence (and the ability to read her own file).

She sees her own past repeating in front of her eyes. As she herself was paraded in front of the board by Leekie, a curious talking dog, she sees Kira brought into the room the same way, a new Eve, a child of eight years who will give birth to the next generation of clones. Like Rachel, Kira has no stake in any of this, or any kind of control. Rachel doesn’t know that Kira has more insight into all of this than she ever had, that she is in fact very consciously working on her own freedom in telling a story that conveys secrets, that Kira is the best of her mother and aunts. What matters, in the end, is two things: Rachel realising that she was never more than a lab rat, regardless of what Westmoreland promised her, and the fact that Kira is no well on the way of sharing that fate. The result is – pure, beautiful rage, the rage of a woman who has sacrificed everything, who oscillates wildly between wanting a normal family, with parents and children of her own, and looking down on all her sisters who haven’t been raised in the fold. The thing that breaks her, in the end, is realising that Westmoreland has looked through her eye this whole time, that the implant she received after Sarah stabbed her betrays her, is nothing more than a spying device that relegates her even more to the status of an object of scientific curiosity.

Kira: Did you hate being studied when you were my age.
Rachel: I don’t remember.
Kira: Did you get used to it?
Rachel: Yes.

Her status is even more of an insult considering that Westmoreland is nothing more than a pathetic mediocre student, John P. Mathieson, who created a myth with the help of his upper class male privilege. Rachel finally realises that none of this will ever save her, dignify her, exalt her. A trickster like Westmoreland who merely uses people to his own benefit will never grant her freedom. What Siobhan whispered to her will turn out true – she needs her sisters, so she returns Kira to them, and, when she realises that Westmoreland doesn’t just see through her eye, she makes the greatest and goriest sacrifice of all – gouging out her own eye, to be free, finally.

Cosima returns to Scott, and brings news about Kira’s fate, putting in motion the urgent attempts to save her.

Alison returns when she finds out the dire straits the sisters are in, and the danger that Kira is facing. She made friends with a Jungian and learned all about not allowing her dark side to dominate her behaviour, but to instead find healthy outlets for her desires, like a new hair colour and a KORG (and maybe leaving Donnie? Fingers crossed).

Mark has also returned to the fold after his brother’s death, and was apparently promised a cure by Virginia (who has no cure) – in exchange for some sperm, which will presumably play an important role in whatever Dyad has planned with Kira’s eggs. Also, Gracie visits Helena in the convent, and Mark is willing to trade Helena for a possible cure.