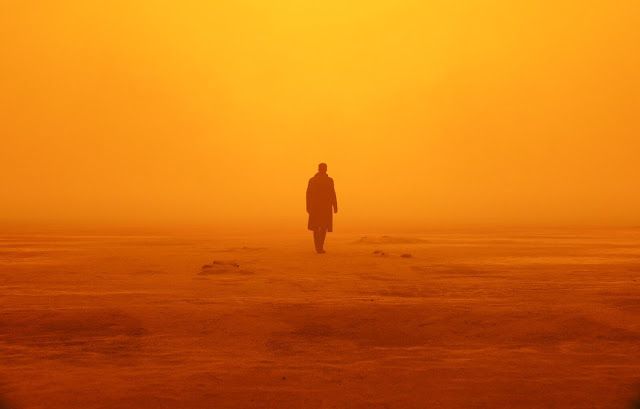 Two moments stand out in this three hour tour-de-force, so many years in the making. Early in the film, protagonist K (either from Kafka's The Trial, or perhaps a reference to Karel Čapek, or both) is questioned about what the difference would be if an android were born, rather than created, and he says, the difference is that those who are born possess a soul. Which, for a character that at that point has been confirmed to be an android himself, and one of the ones that are incapable of misbehaving, seems like an exceptionally philosophical and spiritual take on life. The film doesn't really answer, or maybe isn't particularly interested in, how K would have come to this conclusion, or how the concept of the soul makes sense in his perception of life. I like to think about this though - because maybe it makes sense from the perspective of his programmers, to give such an elevated reason for why humans may have more value than he does, and conversely, why "retiring" the old pre-schism models, who seem capable of individual lives filled with aspirations and dreams, is justified. As much as there is no more need, in this future version of the universe that Philip K. Dick and Ridley Scott created, for a Voight-Kampff test for human consciousness or android programming, the distinction between the sacred human and the dispensable machine is still essential to the workings of this world. How else to justify the killing of a man, who by our current standards fulfils every requirement of a human being with inalienable rights? The story starts with K, sent to retire Sapper Morton, a Nexus-8 replicant who subsides as a protein farmer. He kills Sapper, but also discovers a buried military-issue trunk containing the bones of a woman - who was pregnant, and died during child birth, and also happened to be a replicant. It throws K's entire worldview into chaos, because what would it mean if replicants could replicate - without human intervention? What if replicants couldn't just pursue lives of their own, couldn't just follow human burial rites (leaving flowers on graves of loved ones) but could also reach that final biological boundary between real and artificial?
It's not just K who is shaken to the core. His boss at the LAPD, played by Robin Wright, realises the implications for society, especially in this volatile moment in time. After Tyrell Corp folded, after most of their data was lost in a world-wide EMP referred to as the "Blackout", a genius blind creator named Niander Wallace has created a class of replicants incapable of disobeying, who are constantly monitored.

This is also where a divide happens. To K, the existence of a born replicant child in the world means a radical shift of ideology and history. To Niander Wallace, it means something radically different: an answer to how to create an ever-grown slave class of people with no rights that he doesn't have to build by hand, that can replicate itself naturally. The question of consciousness and rights doesn't occur to Wallace - he isn't just removed from the replicants he makes, but all of humanity, existing in his lonely pyramids, away from society. This is perhaps the point where we remember that the existence of replicants hasn't suddenly changed the whole fate of humanity - if anything, the poor as poorer than they have ever been. If anything, there are points in this film where I wondered, genuinely, if there were even any humans left, if we hadn't be wiped out as a whole for our creations to take over, doomed to replicate the same dynamics of oppression and exploitation without any way of changing the path of history.

In the end, it doesn't much matter if that is the case or not, if it is humanity that has spread to nine other planets, or replicants made in our image, if Mackenzie Davis affecting Mariette is human, or a replicant disguised as a human working for the revolution. It isn't a question of cause and effect. The existence of a born replicant motivates Niander Wallace to set everything at his disposal in motion to find that person - and what is at his disposal is the terrifying, unflinching murder machine Luv (Sylvia Hoeks), who never hesitates, more like a terminator than anything else that has ever existed in Blade Runner.

For K, it means something else. The more he follows the clues down the rabbit hole, the more he manages to convince himself that he is the chosen one. He recovers a memory that he thought was implanted, but now suspects is genuine, of a childhood that he was never meant to have, linking him to the birth date of the mysterious replicant. In what is maybe the best, and likely most lasting scene in Blade Runner 2049, K meets Dr. Anna Stelline (Carla Juri), a scientist creating memories for replicants in a biological bubble to protect her compromised immune system. She accesses his traumatic memory, and confirms that it is based on someone's genuine experience, not created - which feeds in well into K's increasing conviction that he is the chosen one, the special one, the centre of his own story. The idea that he is the child - the child of Rachael and Deckard, as we soon realise, drives him beyond any commands that he may be given. This self-identification suddenly makes it possible for him to creatively interpret commands that he is given, to find freedom in a programming that should not allow him any freedom. It's almost as if the second that he thinks himself to be free, he is - even if that freedom entails suffering and unspeakable violence.

All the more fitting, that throughout all of this, we also discuss the humanity of an AI named Joi (Ana de Armas) who loves K unconditionally, and in whose liberation he is deeply involved in even before he considers that he himself may have a soul. One of his first acts in the narrative is using his money and power to free her from the confines of his home projector, so that she can experience the world on her own terms. It's almost like the thoughts about freedom, and who deserves to be free from the bounds of their creators, is a constant consideration in the back of K's mind. Joi ends up paying a terrible price for her freedom and her insistence to protect K, but in the end, this is her choice. This whole story line is a very interesting and topical choice that maps out the fundamental difference between 1982 and 2017, where humanity is much more concerned with the implications of a super intelligent artificial intelligence than the moral rights of replicants.

Of course, Blade Runner 2049 is about identity and memory, programming and free will. It's always about the question of whether it matters that memories are truly ours, and lived, if they shape our identity regardless of their veracity. K, stoically (because for what else would you cast Ryan Gosling, who manages stoic without, ironically, losing his humanity) works his way towards the truth. On the way there, he is shot, beaten, cut. He finds the man he believes to be his father, who now leads a solitary existence in the remains of Las Vegas, with no company but a dog and his books (and we get a hint that this is where K gets his concept of a soul from - avid reading). He finds out the truth, that Deckard and Rachael had a child, and then Deckard covered up all the traces (it's not made explicit, but there is a chance that he may be responsible for the EMP that wiped out digital information, and made it hard for even someone as powerful as Niander Wallace to be confident in his pre-2022 knowledge).

And then the story takes another twist. K isn't the chosen one after all, but wasn't everything set in perfect motion for him to be all the more motivated to help the cause of the rebels because he believed he was? This moment feels almost like it transcends the narrative - Ryan Gosling's K believing that the story was about him this whole time, and giving his all because of it, only to realise that was nothing but a minor puzzle piece, one that isn't even bound to make it to the end. Freysa, the leader of the resistance, tells him that he needs to kill Deckard to protect the true identity of the born replicant, who will give the rebellion the moral cause to succeed. K's last act will be disobeying that order - he will leader Deckard to his daughter, who was moved to tears seeing K's memory because it was hers, this whole time.

Of course, there is more. There is Deckard, tortured by Wallace with a cloned version of Rachael, insisting that this person isn't the same as the one that he loved, because as much as memories can be implanted, it makes a difference whether they were lived or not (he says, her eyes were green - which is an insider joke about a continuity error in the original film - that works as so much more).
There is the inevitability of a complete catastrophe that will wipe out earth, and all those flimsy humans working their hardest to leave for a different planet - but no other planets are ever shown.
There is the idea of a baseline, a comfort, a way for humans to feel non-threatened by the existence of replicants who are capable of comprehending philosophical and spiritual concepts, who are so much stronger, and so much more able to survive in extremes (which is really the whole masculine, aesthetic veneer of both films). The Voight-Kampff test has become unnecessary because it is no longer difficult to distinguish between replicants and humans (but why is it no longer difficult? And were any of the people in K's department ever human?), but the baseline measures if replicants still comfortably follow commands and remain predictable.
at 15:52