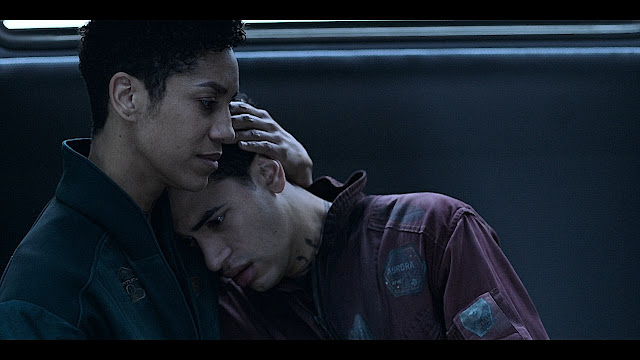 He’d pretended kindness so well she would doubt herself, make herself wonder if she was the one being unreasonable, irrational, all the things he implied she was.

“Didn’t break me when I was a girl,” she said to the tiny black kit. “Don’t know why he thinks he can break me now.”

In Tyson Yunkaporta’s Sand Talk, a book about indigenous knowledge that questions Western conceptions of the world, the author explains that space is seen differently within that worldview. Rather than considering it a great emptiness, a void between the stars, it is regarded as part of country.

This idea opened up a window for me into this new season of The Expanse, which is so different from previous ones. The Rocinante is stranded. Holden’s crew is dispersed across different places, incapable of aiding each other. The focus of the season is the fall-out from Marco Inaros’ asteroid attack on Earth. Amos and “Peaches” are battling their way through a destroyed United States, from Clarissa’s high security prison complex to Amos’ birthplace Baltimore. Bobbie and Alex are following the trail of a conspiracy on Mars – parts of the Martian military providing Inaros’ Free Navy with Martian military technology, including ships. Holden mourns the death of his friend Fred Johnson, also killed by Inaros, and tries to re-capture the last remaining bit of protomolecule that the Free Navy stole from Tycho. But the true centre of this season are Naomi Nagata and Camina Drummer, two women who encompass the complexities of the Belt.

The historical setting of this season has thrown every civilisation into radical change. The discovery of the ring network that leads into countless new world means a new pathway for humanity, and like every radical paradigm shift, it endangers previous ways of living. This is felt acutely on Mars, which has slowly and very passionately toiled to make a habitable planet through terraforming – a project for generations, that depends on ideological dedication from citizens who will not be alive when the great utopia is achieved. Why terraform a planet so unwelcoming to human habitation when there are so many beyond the gates ready to be colonised, with welcoming gravity and atmospheres? The prospect of going beyond and further out means an end to the great Martian project, and the society that Bobbie and Alex discover upon their return is one in decline, one in which the binding principle has been lost.

And maybe that is why the previously unimaginable alliance between factions of the Martian military (a military pictured as highly dedicated, in a society that is almost as militarised as the one painted in Starship Troopers) and Marco Inaros has come to fruition. The Martian way of life is ending, the great project is a sham, but the other civilisation that has to adapt to the new reality is even more ill-suited to it. Belters are born in space, they live on space stations and ships with artificial gravity. Throughout the existence of The Expanse, we have seen the physiological reality of this existence – most Belters cannot exist in planetary gravity wells. From Chrisjen Avasarala utilising this fact as a horrifying torture technique to Naomi finding it impossible to stay on the surface of Ilus for an extended period of time, it is clear that this bright new future for humanity beyond the ring gates will not include most Belters, and those that can survive and make new lives downwell will no longer be Belters.

Marco Inaros plays two roles in this season. He is politically radical, fighting to carve out a space for Belters from the economic exploitation of their past in a future that appears to be shaped to exclude them. He does this by creating an ideological identity for Belters – an identity based in that history of exploitation by the Inners, to line their pockets with the riches of space exploration without ever giving back, and an identity based on the idea that the country for Belters is space, not the surface of a planet. If the citizens of Mars and Earth are so eager to live on planets, they should, but the enormous space between those planets belongs to those who have done the hard work, who live on rationed water and air, whose children are born with the long limbs and low bone density of a culture that celebrates first steps in the vacuum of space. Belters have been exploited over generations, policed and controlled, while building a society distinctively different on their stations and ships – a new language, a patois of the old, a new way of being that fits in with being an inhabitant of space.

A few months ago, when Elon Musk (a man who sees himself as a Solomon Epstein but is a lot closer to being a Jules Pierre Mao) suggested that those too poor to afford space travel outright could work off their travel cost, as if this was an entirely new idea, many pointed out sarcastically that comparing the suggestion of indentured labour to science fiction was the wrong thing to do when there are so many historical comparisons to be made. The idea that space exploration and settlement would involve indentured servitude is just an eloquent extrapolation from human history, in which free labour and slavery have always been used to give empires and corporations access to resources that were never evenly distributed. The rich will travel space as a past-time, to find a reprieve from the boredom of leisure, but the poor will earn their way with backbreaking work, likely passing on these debts to their children born in new and strange territories. The Expanse has just fast-forwarded a few generations to portray the fall-out. Marco Inaros sees this historical crime, and sees that it will be repeated yet again, when humanity moves on to the new territory beyond the gates. He is powerful because his grievance with the Inners is genuine, and based on a long history of injustice.

The Expanse acknowledges the salience of Marco’s arguments, but it also shows the horrible fall-out of that ideology expressed as political action. The captured and camouflaged asteroids flung at city’s on Earth make no difference between the elites that have profited from the labour of the Belters and the masses of humans living on the equivalent of a universal basic income, now that labour markets have moved so far from being accessible to all. More than that, the other side of Marco, way beyond the question of what actions the grievances he has justify, is his personal one (even though Marco is likely the kind of person that refuses to see any distinction between those two sides). Here we cycle back to Naomi Nagata, who has revealed that she has a son that she left, that she is now trying to find. A son with Marco Inaros, that she left behind when she was much younger because Marco was severely psychologically abusive towards her, using her knowledge to plot a terrorist attack that killed many, that she would not have consented to, had she known. Marco also used their son, Filip, to force Naomi to stay. In the end, Naomi made a decision between taking her own life and leaving her son behind – the kind of impossible decision that nobody should ever made, that left her deeply scarred and vulnerable.

But now she is back under the control of the man who almost made her jump out of an airlock. She is kidnapped when she is trying to reconnect with Filip (played by Jasai Chase Owens, an eerie genius move of casting since he does look like both Dominique Tipper and Keon Alexander), who has been raised solely by Marco, who has never seen the world through any other lens. The Expanse repeatedly shows how controlling Marco is, how he manipulative through withholding and giving praise, how he sees Filip as an extension of himself rather than his own person. It becomes clear that this is how he saw Naomi as well – as someone to execute his plans, to follow his path, without any consideration of her as an individual. It’s a horrifying portray of a very charismatic abuser, who has political power over people because of his charisma and personal power over his family because he does not hesitate to use violence. At the same time, it feels like there is a connection between his attempts to carve out a new and more empowered existence for Belters in this new world and his deep anxiety, both personal and public, of losing influence over those closest to him.

Camina Drummer is involved in both sides of this. She first knew Naomi just after she exited this toxic and destructive relationship, and helped her rebuild a life outside of Marco’s influence (even if the show is never clear on what their relationship was exactly, leaving it up to us). It has also always been abundantly clear how much Drummer loves Naomi. She has lost all of her other close friends to Marco, and now has her own crew (her literal family – they’re a polycule), but it is impossible as a Belter to escape Marco’s influence, because he is rallying all available forces, asking them to choose a side, with the caveat that deciding against him means certain death. Camina, more than her family, is aware of who Marco is, and how dangerous it is to be dependent on him and in any way connected to his ambitions. She is an interesting character because she never left Belter life as eloquently as Naomi did when she joined the crew of the Rocinante – Camina shares the same worldview of Belters being exploited by the Inners, and having to fight for an equal share in the new riches, but she also knows that Marco is the wrong person to focus this struggle.

If the ways Belters live is inherently new and different from the way that humans have lived downwell, then the conclusion would be that Marco’s way of resisting and claiming space is ill-suited, because it only replicates the violence and hierarchies of those he is fighting against. Violence dominates all of his relationships, private and public. He is doing to Filip now what he used to, to Naomi, he is leading his revolution the same way an absolute ruler would, with no accountability for his failures or ability for others to contribute ideas. Drummer’s way of life – part of an interconnected family united that lives and works together and shares every decision – appears more radical and newer than anything that Marco does. His methods of retaining control are tired – when he tries to repeat what he did to Naomi all those years ago, using her again to cause suffering against her will and without her consent, she once again proves more resilient and stronger than him, finding a way not only to escape his grasp but to turn her own personal nightmare into a successful pathway into freedom. It is Naomi’s resourcefulness and bravery and Drummer’s protectiveness of her family that will chart a new course, not Marco’s attempts to replicate the violence that Belters have experienced.