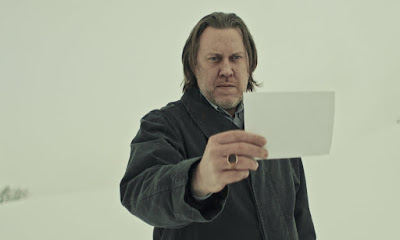 A few years after I moved into an apartment in Vienna’s 12th district, builders found body parts in a basement underneath a local ice cream parlour. A woman had dismembers two of her former partners, both of whom she accused of violence. Five years before that, I lived in a different apartment in the same Viennese district when Natascha Kampusch escaped the man who had held her captive for years. I remembered her face from posters that had been put up around my school – posters that would bleach and become brittle over time, when it seemed unlikely that she would ever be found. It took her more than eight years to escape.
I thought about both of those cases, and many others, while watching Austrian theatre actor Nicholas Ofczarek – who has a long career on different stages, and whom I had seen perform many times, as a regular theatre goer – play disillusioned police inspector Winter in Der Pass. It’s hard to tell how much of his manner, his colourful language, translates into English, but as someone who has lived in Australia for six years now and adopted a different citizenship, it was the first time that I heard someone speak in a dialect that I spent so many years surrounded by for so many hours at a time. Subtitles wouldn’t capture the layers of his crude but lyrical Viennese, and how they play off against Julia Jentsch’s Ellie Stocker, his German counterpart in the international investigation. Der Pass takes the concept of the Danish-Swedish Bron/Broen, a murder that happens exactly on the border between two European Union countries, and situates it on the on a boundary marker in the Alps between Salzburg and Bavaria. It has previously been adapted into the French-English The Tunnel and the Mexican-US The Bridge, but I think as a concept it works better in Europe – attempting to capture subtle cultural differences between countries even as they grow closer together, even as those borders cease to have true meaning due to the European Union (of which the UK was still part of when The Tunnel wrapped in 2018).
In terms of the case itself, Der Pass isn’t much different from its predecessors. It’s very much in the style of Nordic noir, grim and dark, unforgiving in its depiction of violence and escalating in its need for depravity in its serial killers, which are driven by ideology as well as a psychopathic need to kill. Perhaps it wouldn’t even had peaked my interest if it had stuck with local detectives, instead of with Jentsch and Ofczarek, who are from Berlin and Vienna respectively, local accents becoming the background noise of other police team members and the public for color. What caught my unawares was how much these Viennese accents – of Winter, of some of the Viennese bureaucracy and crime gang members he is in contact with, would transport me back to the city I grew up in.
And it’s not just the accents. It’s a particular kind of being that is very difficult to explain without having experienced it. Winter cites Wolfgang Ambros, jokes about German perfectionism and punctuality, but the tragedy of his character is that his life has been in a rapid downward spiral for a while before he even enters the snowed in crime scene, and he never manages to dig himself out of it. He is the unredeemable tragic but also very hard-to-root-for figure of many of the books that I was made to read in German class. He chases his beers with schnapps, he wears ill-fitting, never ironed clothes, and a coat with a pelt cover that one of his criminal handlers says makes him look like a pimp – to be precise he says that Winter dresses like a pimp, but lives like a bureaucrat in a sad-looking small apartment. When they have worked together as a well, and Stocker has earned a level of grumbling respect from him, he calls her “Maderl” (loosely, girly) whenever he dispenses life advice, and it’s meant to mean that he cares about her, but that he will never reform to fit into a modern workplace, where such things would be unimaginable. He embodies what we would call “Grind”, a particular kind of dirtiness and neglectful disrepair that is contrasted with Stocker’s attempts to remain professional and courteous to a colleague who is nothing but. Professionally, he is burnt out, and so deep in the shit with criminal crime that he’s been a fixer for that the ending he meets after solving the case truly feels inevitable from the beginning. He is an embodiment of singer Falco, who wrote a whole song about a rapist from the perspective of the criminal, and made it a hit that would casually play on daytime radio all the time.
All of this is not even current Vienna, or a Vienna that I would have had much access to, but it’s the Vienna of 80s and 90s television shows, of dark Beisls that serve Gulaschsuppe. All of it feels darker than the serial killer with his ideology about returning back to nature and despising modern, alienating society (or maybe just hating not fitting in with that society, or hating women who disagree with him), in the same way in which the young right-wing populist politician (who has the required uniform of the rural politician but not the dialect) using the crime spree as a platform for his campaign feels like a much more clear and present danger than this man from the woods does. I’m not sure if this has anything to offer as a crime show that we haven’t seen a million times before, but maybe it’s time to give Vienna the prestige TV show treatment so that I can watch it from a safe distance.
at 15:43