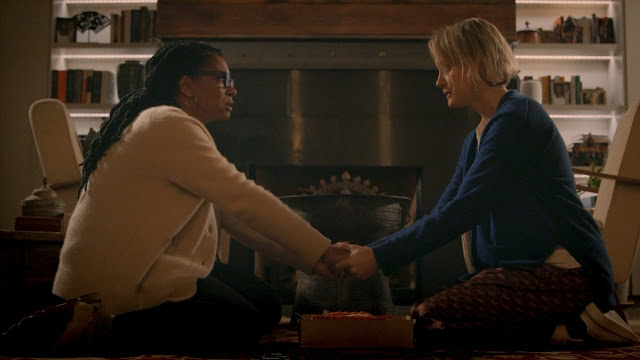 After 2020, many television series skipped over the existence of Covid. Not the Kings, who in last year’s season of The Good Fight, had an episode acknowledge the severe changes to the shooting schedule in a heart-felt tribute to community over video-calls, and then began this year’s season with an episode that felt like a fever-dream, catching up with all the events since the early months of the pandemic. It feels fitting that they would have squeezed a whole season of a separate television series into their schedule somehow, a television series entirely about the pandemic, studded with Broadway stars and starring The Good Fight’s Audra McDonald (and her real-life husband, who plays the man she is having an affair with while her on-screen husband appears with his real-life wife, who plays the woman he is having an affair with – a great tribute to Covid-safe shooting protocols) and Taylor Schilling (Orange is the New Black).

I knew nothing about The Bite going into it and I’m glad I didn’t, because half the fun is seeing the concept play out. The actors are limited to interacting in person with people within their social circle, and the main locations are two apartments in a New York complex and a room in the CDC that looks like a teched-up broom closet. Most of the conversations happen over video-calls, and the connection to the outside world is mainly mediated through television news updates and the street noises coming through the windows, while doors, and the connection to the outside world they represent, becoming increasingly dangerous portals through which danger may enter, if it isn’t already present.

The twist of The Bite is this: as a doctor currently operating from her apartment, Rachel (Audra McDonald) becomes slowly aware of a new outbreak – something that isn’t Covid, something that escalates into looking a lot like a zombie apocalypse. Her upstairs neighbour Lily, a dominatrix currently also working from an apartment via video, first becomes aware when she allows a regular customer to come over, only to discover that he’s been bitten and infected, and has developed a taste for human flesh. Rachel’s husband works at the CDC and becomes part of the government’s reaction to the increasingly undeniable outbreak of the zombie virus, including ridiculous newspeak attempts to make it seem less dangerous than it is, and suggestions to contain those infected with cones of shame while regular economic life can continue to resume. The government’s line is that Americans are tired of lockdowns, and that businesses must reopen – now a well-known line, one that continues through new waves and strains – but the Kings have always had a great way of finding absurdities and magnifying them, and the frantic PR approach while things get entirely out of hand is one of them.

Rachel and Lily, unlikely partners, begin their own investigation, while things get more and more chaotic. They experience personal trauma (tragically, Rachel’s mum works in lab that experiences an outbreak and decides to end her life, and on the absurdly lighter side, Rachel counsels Lily’s mum through performing an amputation to save her dad’s life). Part of the workings of The Bite are how disorienting it is to find yourself in the midst of a life-changing crisis – here, it’s the zombie apocalypse, but obviously, the same applies to being in the almost third year of a global pandemic. Where do you stop and say, yes, this is a zombie apocalypse that will change life as we know it? Is it when your cat becomes infected and you have to devise a plan to trap it so you can test an experimental treatment regime in it before giving the same to your lover, who is slowly turning into a zombie in your bedroom? Or when the delivery guy, seemingly unfazed and armed with a wide selection of classic zombie movie weapons (samurai sword, axe, baseball bat) still reliable rings your doorbell, once after killing an entire group of zombies without ever mentioning a thing, except asking for you to leave a positive review? The Bite is trying to reimagine the zombie genre through the eyes of knowing how global pandemics actually play out – the personal isolation of being trapped in an apartment and relying only on video-calls to make contact with other humans, the political game of balancing lies and truths – but it is also unforgivingly funny, and not just but especially when it portrays horrible personal tragedies that become par for the course as the world ends. There isn’t much time to ruminate on your lover’s dead body when you’re desperately trying to get hints about treatment regimens from an ominous former secret government project scientist who is now living off-the-grid, while a deadly virus is making its way through your body. And yet, amidst the weirdness, the thing that brings everything together is McDonald Schilling, compellingly building a relationship of mutual trust and reliance as they step up, so that the moment when Lily finally steps through Rachel’s door – after saying no to a way out, to being saved – feels like an entirely surprising and delightful catharsis. And it feels romantic, to boot, in a very unexpected way, after six episodes in which intimacy is impossible and potentially deadly.

Email ThisBlogThis!Share to TwitterShare to FacebookShare to Pinterest
Labels: Reviews, Television, The Bite