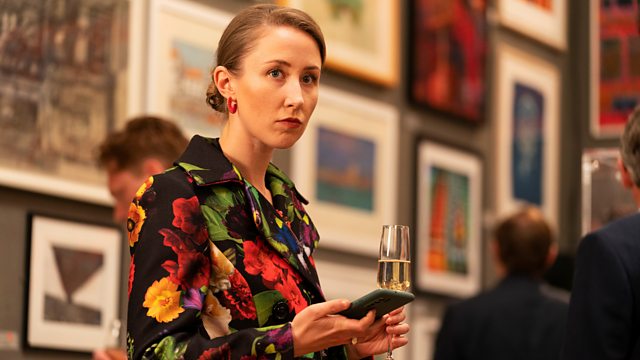 Becky (a singular performance by Erin Doherty) spends her day working meaningless temp jobs – disrespected by bosses who think her underqualified or replaceable, endlessly bored – scrolling Instagram, watching other people her age with more privilege living seemingly charmed lives. Sometimes, to break the endless cycle of work and poorly looking after her mum with early onset dementia who regularly fails to recognise her and treats her like a child when she does, she pretends to be someone else: all it takes is the right kind of information, the right wardrobe (stolen), a convincing voice. Becky’s transformations are remarkable, as is her ease to slip into her cons. Then we watch her transform herself more permanently – when she inserts herself into a grieving group of friends, distraught after the suicide of Chloe, one of their own – and spends her days as Sasha, first friend to Livia (Pippa Bennett-Warner), then organiser of an art show for Livia’s husband and political campaign of Elliott (Billy Howle), widower of Chloe, then Elliott’s girlfriend.

The true brilliance of Chloe is the economy with which the writers reveal the mystery of Becky/Sasha (Erin Doherty). The audience is bound to her, with no outside perspective, and the show brilliantly plays on the assumptions that we make about Becky, even when the story becomes more muddled with flashbacks to her past. The tenuous connection she had with Chloe – two phone calls from a number unknown to her on the night of her death that she never answered, only to find out that they were from her when the police call – becomes clearer when we realise that this isn’t like Becky’s previous cons, that she isn’t after a break from her boredom, distraction from her monotonous life, or temporary glamour. She veers towards catastrophe so many times, embellishing on her story, building an entire back history that nobody can verify – early on, it appears as if Josh (Brandon Michael Hall) may reveal her secret straight away, since he met her in a different incognito, and instead he becomes her only source of outside support, someone with more knowledge about her than anyone else, maybe the closest to an actual friend that she has. It isn’t clear if she set out from the beginning to figure out what happened to Chloe or if it just sneaks up on her that she can’t pretend not to care – we realise, quickly, that Chloe is someone she was a friend with as a teenager, and had a painful break-up with that involved this new group of friends, who mocked her for not quite fitting in. She’s managed to breach the economic divide now by assuming this aspirational identity, and soon, she realises that all those Instagram posts about happy lives were fake and hiding depths of despair: unhappy marriages, affairs, addiction. She also realises that the seemingly perfect marriage between Chloe and Elliott was nothing but when she becomes Elliott’s boyfriend, appearing to fall into a net of support when he pays for a good care home for her mum and helps her get paid for the work she is already doing for Livia, all things that slowly turn out to be more ways for him to control her.

Sometimes during Chloe I was reminded of The Girl Before, another recent tense thriller that didn’t quite stick its landing. It is high concept as well – two women move into an architect-built house that comes with its own AI and 200 rules the tenant has to follow in order not to be expelled – revealing the power dynamic between a rich architect who has created a situation in which he can force his own aesthetic value system upon someone else, and two women who talk themselves into seeing this as an opportunity for self-improvement. Whereas Chloe gets better with each twist, revealing only at the end what it is truly about (not a con, but the horrors of a controlling, abusive relationship, especially when those who know about it refuse to render help), The Girl Before ends up being a conventional crime thriller, also about an abusive relationship, but one with only a tenuous relationship to the gimmick of the show’s interesting premise. In Chloe, the con is a catalyst, and carried out to perfection both by Becky (one of my favourite small details is her Marge Simpsonesque ever-changing coat - conning your way into the upper class requires some arts and craft) and the actress who plays her; in The Girl Before, the empty, minimalist house is aesthetic window-dressing, the story weirdly taking the least interesting possible path.

This flip in the second half of Chloe is unexpected, and suddenly there is a twin terror for Becky. She comes close to being found out many times, but she is so good at lying and pretending that she manages to stay in character. But then Becky realises that Elliott, in a way, is pulling off his own con: pretending to be caring and loving when he is in fact profoundly controlling, psychologically abusive, and now subjecting her to the same domestic terrorism that Chloe suffered from. It’s a dangerous position to be in: living a lie, without a functioning support system, while battling with a man determined to trap her the same way he did his wife. She soon realises that Chloe was just as isolated as she is now, with all of her friends valuing Elliott higher than her, believing the lies he told them about her, turning them against Chloe and removing them as possible sources of support. Suddenly, Chloe is no longer the story of Becky pulling off a high-wire act, a con that obviously has a time-limit on it – it becomes the story of a friend trying to figure out what happened to a woman she lost contact with, who mysteriously reached out to her just before her death. This is brilliantly done as Becky’s imagination of how that phone call would have unfolded had she answered it. Finally she realises that it was a call for help – help she couldn’t provide, but at the least she now has an obligation to figure out what really happened that night.