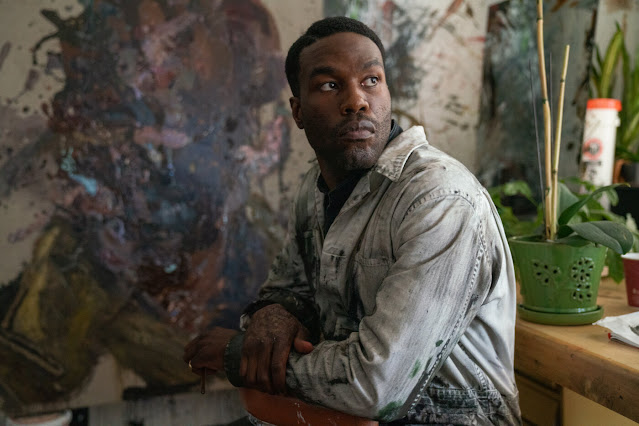 Right after Anthony McCoy’s (Yahya Abdul-Mateen II), an artist who has returned with new inspiration after a two-year break, exhibits his new piece about an urban legend in the Chicago Cabrini-Green housing projects, he sits down with an art critic to talk about his work. It has just assumed an additional layer of meaning – being centred around the legend of a slasher than can be evoked by saying Candyman in a mirror five times, the gallery owner and assistant were brutally murdered after the exhibition opened. Anthony talks about the connection between the cruelty and brutality suffered through centuries by black people at the hands of white people and the gentrification that is now painting over that violence as if it never happened – but the art critic counters that Anthony, as an artist, belongs to the very avant-garde that is gentrifying neighbourhoods, profiting off the temporarily low rents to avoid having to have a dreaded day job and inevitably sowing the ground for others who want to live in desirable neighbourhoods to follow and push those who have lived there for generation out. It’s a hell of an argument to make for a white art critic who, in the economy of art production, lives off Anthony’s labour while pretending to be above the reality of how that art was made. It’s a pivotal moment in the film – Anthony will leave, but the art critic will die the same night, slayed by the same Candyman that killed the gallery owner earlier after he slighted him.

It’s an argument that will soon be revealed to be wrong in its essence – Anthony’s mother lied to him about where he was born and spent the first two years of his life. His obsession with the legends of Cabrini-Green started when his partner’s brother (played by Nathan Stewart Jarrett) retells the most well-known part of the Candyman legend, the one that made up the original film. Nia DaCosta relies on the beauty and horror of paper cut-outs that lend an almost mythical edge to the violence as it unfolds (reminiscent of Kara Walker’s art). A young white student wanted to study the urban legends and unwittingly became not only part of it, but as a white victim, also the most well-known chapter, fading the earlier black victims into obscurity in the process, so that once Anthony begins digging into the long history, it takes a local man to tell him about all the earlier black men who have died either at the hands of white mobs for perceived transgressions or by police who fired first before asking any questions. Fascinated by that history of violence, he begins to paint each victim, not knowing – because his mother tried to protect him from his own history – that he was the baby that Troy told him about, the one that almost burned in a bonfire in 1992, and was rescued just in time. Anthony isn’t a gentrifier – he unwittingly returned to a history he was already part of, to the place where he was born and became inseparably entangled in the myth of Candyman.

The film follows his transformation, literally as his body carves itself horrifically into a beehive, figuratively, as the violence of Candyman, once released into the consciousness of those who perceive his art and become tempted to repeat his name, refuses to return to the box of forgetfulness. Brianna (Teyonah Parris), his partner, a rising curator, perceives the changes and tries to follow what is happening, but in the end is too late to save him as he becomes a victim of the same horror that befell the black man in the opening scene of the film. A strange man, who lived in the walls of Cabrini-Green, liked to give candy to children – a gesture laden with meanings, none of them good – and the police shot him before he could reveal himself to be harmless, the victim of assumptions. The police shoot once again, long after the true danger is conquered, and try to pressure Brianna into giving a false statement to hide their wrongdoing. She refuses the only way she can in the moment, saying Candyman five time into the rear-view mirror of the police car, unleashing the monster who joyously takes revenge on the police men.

Candyman is multi-layered, and it is difficult to distil just a single statement about what it is trying to say about violence, racism, police brutality – but it also deeply and profoundly about a haunted place, a condemned housing project that contains so much history but also people who are simply trying to live their life in the only place they can afford, while being the only ones who remember that history. The art critic refuses Anthony’s right to belong in that space by calling him a gentrifier – his apartment is beautiful and stylish, rebuilt on the torn down buildings that once existed there, but his connection to this place was forged long before any of the new development began, and his attempts to preserve the history of violence in his paintings (at another pivotal moment, someone asks him where he “found” the paintings he places meaningfully behind a mirror that viewers of his art can chant the name into, if they dare, and he angrily responds that he found them in his own studio, where he painted them, restating his right to these stories) are what place him at the centre of this new chapter. He doesn’t mean to paint himself into the legend itself, but in way, he was already there when he started painting.

Master, Mariama Diallo’s directoral debut and a story she wrote herself, deals with a similar refusal to accept that its three main black protagonists (played by Regina Hall, Zoe Renee and Amber Gray) have a right to be where they are. It is set in a fictional storied New England university in which Regina Hall’s Gail Bishop has just become a Master (what a word!)– head of one of its houses – and mentors both a new black student in her first year of study there (Jasmine, played fantastically by Zoe Renee) and her black colleague and friend, Liv (Amber Gray), who is vying for tenure. When she first arrives at the house that will be her home and responsibility, the key refuses to turn in the door, as if the grounds itself refuse to accept a black woman to enter, and as she gets settled, she finds the kind of horrible historical artefacts that a long history of racism leaves behind – like scars, the artworks and papers, phrenological studies and straight-up racist figurines, pop up to remind her that she has entered a place that she could have only entered as a servant for most of its long history. At every turn, she is reminded by her (often awful) colleagues that she is there as a signpost of changing times, but the reception that student Jasmine receives from her peers makes it clear that the times haven’t changed all that much. The white students welcome her with a list of famous black people they know, as if they were all interchangeable, they don’t hesitate to chant the n-word along with the music they play at their parties, and once the façade fully falls, they become life-threatening, undermining Jasmine’s mental health to the extent that she commits suicide. An early paper she writes in her English lit class gets an F for not sufficiently tracing the meaning of race in the Scarlet Letter, and the black teacher who fails her suggests that perhaps Jasmine, “with her background” is in over her head, while Jasmine reminds her that she was an honour student in a suburban high school. The two urban legends of the college – one about witch burning, in the 17th century that a community bordering the school still pretends to live in, the other about the college’s first black student, who committed suicide after relentless bullying in the 1960s, come to the surface again as Jasmine explores where she has landed, a place without true companionship, unmoored by what she encounters, as Gail is too distracted by manoeuvring the politics of this place to aid her sufficiently. Gail is too distracted by another concern, the question of whether Liv’s blackness is genuine, if her chronic hiding of her past and family hide a Rachel Dolezal-sized secret – a question that almost feels like a distraction in the face of the overt racism that Jasmine encounters from the other white students, and the horrible histories hidden in cupboards in her new home. In the end, the answer to whether any of the three can belong, if a place with such a long history of refusing to be anything other than white, is one of sheer survival – a life there for Gail becomes impossible.