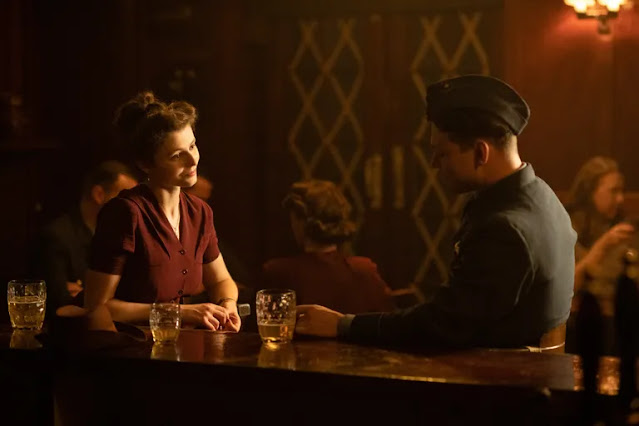 “Become such as you are, having learned what that is.”

“What if we had a chance to do it again and again,’ Teddy said, ‘until we finally did get it right? Wouldn’t that be wonderful?”

Among the many literary adaptations currently unravelling on television, Life After Life surprised me the most – I remembered enough of the novel to come into it with a fondness for the characters, but not enough to miss out on the surprise twists of the plot. Ursula Todd (played in her teenage years by a fantastic Isla Johnston, later on by Thomasin McKenzie) is the third child of Sylvia and Hugh, a very comfortable upper middle-class family with its own cosy estate in the British country side, lovingly named Fox Corner (Todd being a Middle English word for fox). She is born with complications – and early on into the story, it is revealed that each time Ursula (little bear) dies, and there are many times that she does throughout Life After Life, the story once again returns to the moment of her birth, giving Ursula another shot at life. Each time, her life takes a slightly different path, because Ursula is left with a strong sense of foreboding, of déjà vu, that allows her to alter the course of history. She doesn’t exactly know why, or how – it is a sense, not a knowing, of imminent danger, that leads her to (sometimes comically) avoid catastrophes that we have previously seen unfold. For example: it takes young Ursula several attempts to steer her family away from the Spanish flu outbreak, finally resorting to pushing maid Bridget down the stairs to keep her from attending a parade in London, a drastic step that leads her to one of the spiritual influences in her life, a modern-minded psychiatrist (Ron Cook) who has studied philosophy and introduces her to concepts of Buddhism and Nietzsche’s eternal return. One of the great decisions that the makers of the television series come to is to give these sessions more time than they have in the book to unfold – through the lens of these concepts, Ursula comes to an understanding of sorts of her conditions, and Dr Fellowes remains utterly non-judgemental throughout, developing a fondness for his young patient, arguing that it does not truly matter whether her experience of reality is caused by a neurological condition or is simply her way of existing in the world. She sees a depiction of the Ouroboros, a snake biting its own tail, and comes closer to comprehending that perhaps, her sense of danger gives her more agency than she previously suspected.

Life After Life is inherently about history, both personal and at a greater scale. Early on, her father Hugh goes to fight in WW1, and the scars of that war – Hugh doesn’t speak about his experiences except once, remaining jovial and generally satisfied with his big family, his beautiful corner of the world – but others come back changed terribly, like the family’s cook’s son. Then comes the great plague, and then, another war, this one just in time for Ursula brothers to fight in. Oldest brother Maurice becomes a bigwig in the Home Office and has generally deplorable politics, but younger brothers Teddy (if you love his character as much as his family and I do, you can follow his own adventures in Atkinson’s follow-up, A God in Ruins – he is played by Sean Delaney, also great in the one season of Killing Eve worth watching) and Jimmy join the Air Force and Army respectively. It is the loss of Teddy (his plane crashes, his survival is highly unlikely) that spurs Ursula to believe that she can perhaps not only affect the fate of her family, but that of history itself, and as she becomes increasingly haunted by her sense-memories of other lives lived, she develops an obsession with somehow preventing the war that causes her brother to die. Throughout the novel, there are several discussions about whether that would be possible by simply killing Hitler early on, before he becomes the person that will drive Europe to war – would you be able to pull the trigger, would it make a difference even, with so many others ready to take his place (Stephen Fry clearly said no in Making History), but Ursula goes to Germany, in more than one life, to try and prevent what will kill her brother.

This television adaption truly shines when it slightly deviates from the material. Frequently, it focuses more on characters that felt less graspable in the novel, like Ursula’s dramatic aunt Izzy (played with glee by Jessica Brown Findlay), who is living a very different life from her brother and brings a liveliness to her scenes that feel essential in a series with so much suffering and death. Ursula’s sister Pamela (Patsy Ferran), who will later become a scientist and functions as an analytical voice of reason, constantly overshadowed by her siblings but at the same time solidly present at every turn, sometimes feels like she grounds the story somehow. The bits of the novel the show leaves out aren’t missed – maybe for timing reasons, or maybe because the sidestory of a murderer killing young girls would feel more out of place here than it did in the novel written by the author of the great Jackson Brodie stories. The two worst versions of reality in which Ursula experiences the most suffering are the two where she marries, once a pathetic man who lies to her from the start, who could not be more different from her father and beloved brother, and once a German lawyer are the hardest to watch – perhaps mediated by the fact that the way the show functions returns us to tabula rasa each time, rather than indicating that all of these versions of reality exist alongside each other, that each universe that is created by these choices is just as real as any other, and will perhaps not necessarily end with Ursula’s death, which always inevitably throws us back to her birth in 1910. All of her acquired premonitions about the world can lead her to pull the trigger in a Kaffeehaus in Munich, but we will never see the world that emerges from that act, because Ursula can’t.

The television adaptation is a bit more explicit about the conclusion here – a concept that Dr Fellowes presents to Ursula early on, a pathway to exist with the constant uncertainty, the terrifying possibility of bad things happening to either her or the people she loves. Amor fati, or love of fate, the idea of simply accepting what comes instead of attempting to escape. It is a different kind of becoming, but I think in the case of Life After Life, it lends a rather beautiful structure to the path that Ursula takes.