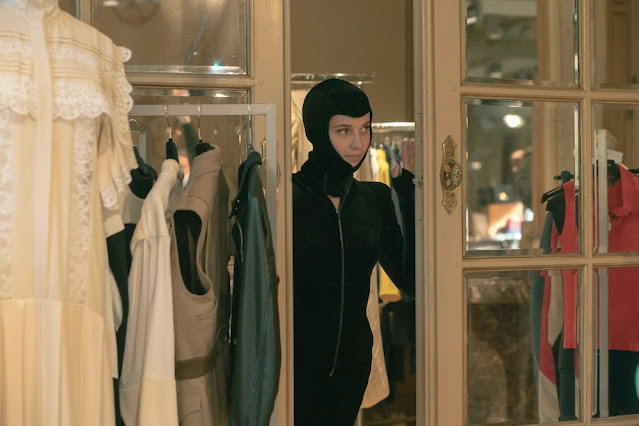 In 1996, French film director and film critic for the Cahiers du cinema Olivier Assayas, fresh off the success of his first film Cold Water, which was screened at Canned, made Irma Vep. Irma Vep is not a remake of the early 20th century Louis Feuillade silent film Les vampires – it is instead a film about the making of a remake, starring famous director Jean-Pierre Léaud as director René Vidal, whose attempt to pay tribute to the earlier film ends in chaos, in part because of his own precarious mental state. So, there are already more than two layers of reference here – an original film, and then film about a remake – and Irma Vep, consequently, is a film about the state of the French film industry at that time, struggling for relevance especially in comparison to the flourishing Hong Kong film scene from which Vidal recruits the star of his film, Maggie Cheung who plays the titular Irma Vep.

To add to these layers of history and meaning, Assayas married the star of his film – a marriage that ended a few years later. He then went on to make many other critically acclaimed films, all of which are about border crossings of different kinds of and levels of intimacy, from the broad scope of Carlos, a three-part-biography of the Venezuelan terrorist, to the much more intimate and more recent The Clouds of Sils Maria and Personal Shopper.

These latter two feel relevant, considering that they both feature Kristen Stewart, forging a career away from what may have been expected from her (both films, and her cooperation with Kelly Reichardt in Certain Women, are fantastic). It makes the fact that Assayas has now created another layer to add to what was already a complex web by adapting Irma Vep into a television show for HBO – an adaptation that is once again not a remake, but a show about a remake, again following director René Vidal (now played by Vincent Macaigne) as he remakes his own Irma Vep into a streaming television series. The show is shot in English, hinting at what market it is made for, and stars Alicia Vikander, who portrays an American actress known for starring in big-budget blockbuster films. And of course, this René ended up married to the star of his original Irma Vep, but the marriage ended too soon, and is at the centre of most of the therapy sessions he attends to keep his horrible anxiety at bay. The production flounders through many obstacles, especially the strained relationship René has with his male star Edmond Lagrange (Vincent Lacoste), who appears to have made it his sole life goal to make the director’s life as miserable as possible with requests to add scenes to flesh out his character, attempts that are made by what can only be described as borderline-murderous decisions by Vidal to put him in mortal danger. Vikander’s Mira appears to be thrown into this tumult, into the director’s struggle with his own past and mental health and the general confusion of the set (soon, a German stage actor with a serious substance abuse problem and a propensity to say shocking things to the media appears), but her goal here is to forge a career for herself that deviates from what is expected, to be respected as an actress, while dodging calls from her agent Zelda (played with a serious mean streak by Carrie Brownstein – a fact that feels like a gentle call-back to Assayas’ previous films, in which once as if invoked by the most unlikely pop-cultural spell, the legendary Kim Gordon appears). Zelda wants Mira as a female Silver Surfer in the extended Marvel Universe. Because this Irma Vep is a television show, or maybe a very long movie broken up into episodes but ultimately still a niche offering (both the show we are watching and the show that is being made, because this doubling is constantly at play here), Rene’s new project might only exist because Gaultier wants Mira as their face for a newly released perfume, but in spite of that, Mira sees it as a way out of the confining horrors of what Zelda has in store for her.

In short, it’s impossible to enjoy Irma Vep without fully leaning into its self-referentiality – because of course a television show that explicitly discusses the value of television shows as a vehicle for narrative vs. content that exists solely to fill a spot refers back to itself – but why would anyone even be watching this if there wasn’t a deep and profound enjoyment in this exercise, in watching Assayas make fun of himself or maybe even work through his own personal issues (the materials for a future biography are endless!), in seeing Vikander, at the height of her career (so good in Alex Garland’s Her, and an Academy Award winning actress for The Danish Girl) play a young movie star on the cusp of becoming a serious actress, but also revealing, in playing Mira, a process for comprehending the motivations of her character, the body work it takes to move in a scene, the trouble of balancing a complex personal life with the demands of a call schedule for a film set. Early on, Mira puts on a beta version of her character’s cat suit – reworked here from latex to velvet – and it transforms her, as if she is merging with the character she will be portraying, sneaking off to steal a credit card from the carelessly left-behind wallet of a stranger (like Maggie Cheung, wearing the original suit, who stole jewellery). Between scenes, she reveals details about her private life – a long-term relationship with fellow actor Eamonn, which ended when she began an affair with her personal assistant, a woman who has now married her way up in society and enjoys the power she still holds over Mira – and dances around the various possibilities that now present themselves in her current circumstance (the symmetry of her current personal assistant, a film student who moves from disinterest to interest very quickly, the close attentions of wardrobe designer Zoe, played by Jeanne Balibar, who is very interested, or the comforts of the well-known, as Eamonn is shooting an unambitious blockbuster – Blade Runner without all the things that make Blade Runner interesting – nearby). Irma Vep isn’t just about the current state of film and television – which it has plenty to say about, by filming these people who make their livelihood from it discussing it, locating themselves within its boundaries – but also about the nature of celebrity, the limitations of being known and followed and still having to do the hard work of finding yourself, even when so many others are eager to do it for you. It’s highly entertaining when it’s René, who exists as a highly volatile director in an environment where every closed door and on-set breakdown could be read as dangerous – is processing the way his private life is affecting his ability to do the work he loves so much (in a way, he is so determined to find the dignity of his work in how he defines it, but then, maybe the answer here is that Irma Vep is magical for having being made, in both senses, in spite of how strange it is in the context of the current environment). It’s deeply affecting when it’s Mira, who is so eager to contribute, who is so professional in how she approaches her, comprehending that her attempts to make herself be taken serious – as an actress, and as a person, ultimately – depend on so many other people keeping their shit together, as if what they’re making is actually the most unlikely magic, poised to fail dramatically and expensively at any point.