The Handmaid’s Tale – I see who you really are. 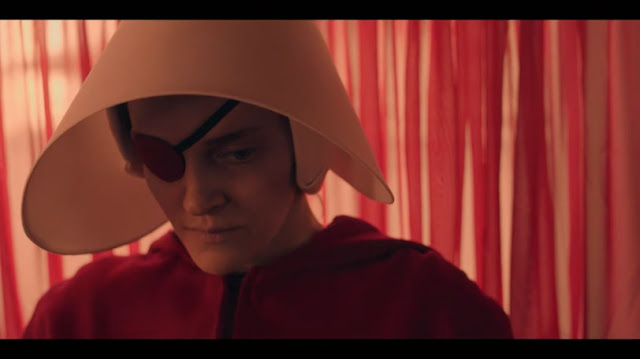 There are many moments in this episode where June almost fires the gun – more than once, at Serena, and once at a random pro-Gilead protestor who hits Moira. In the end, the only shot fired is a warning shot, in the air, but both June and Luke know that there is a certain inevitability to what will happen eventually, a moment in time when June is too provoked. Dear Offred begins with a scary encounter at a playground, where June (apparently dissociating) is pushing a swing for Nichole, and a woman approaches her who begins shouting Gileadean ideological nonsense at her about whether she deserves to have a child. We cut away from the encounter, straight to a psychologist session in which June explains that she didn’t exactly stop at “protecting Nichole”, but went a bit further… physically. Asked if the other woman was okay, she says she didn’t bother to stop and check. It’s an almost comical way to show how close to the edge June is, especially when she finds out that Serena is now housed in the same city as her, in a “culture centre” that the Canadian government gave back to Gilead as a sign of goodwill. Not only does June encounter supporters of Gilead on the street everyday, mostly made up of people who never really lived the reality of Gilead, but the certainty that the outside world condemns the country that tortured her is now slowly slipping away as well, all due to Serena’s genius diplomatic move – the funeral was well received across the world (it’s unclear why, exactly, except if you just accept that seeing a pregnant woman has a stronger effect in a world in which pregnancy has become so rare).

Serena gets busy working on what she started almost immediately after Mark delivers her to her new bodyguard/handler, warning her first that she should instead apply for asylum, as if he truly never understood even the most basic things about this woman. She receives invitations from other embassies (Gilead’s isn’t an official embassy, somewhere inbetween that and the more cult-associated “culture centre”, truly boiling the frog slowly alive). Gilead seems hesitant to accept that she is making such great leaps so quickly and turns the invitations down, but after a phone call with Commander Lawrence, it appears as if Serena will get her way (a gift basket will go to Germany, Venezuela will get some handy tips on “female education”, truly great news for the rest of the world that, as we’re reminded, is still struggling with low birth rates).

Mark checks in on June’s household after releasing Serena from ICC custody and is greeted with the expected anger from everyone – June calls him disappointingly useless, which is a very accurate assessment, and he responds by telling her that maybe her expectations were too high (historically, maybe, but it would have been fair to assume that the ICC would find a way to hold on to a war criminal successfully). Luke is in a bad spot here, both because Serena is responsible for stealing his daughter whom he never truly attempted to save and because his wife is so clearly going to do something that endangers their newly found life together, as well as their custody of Nichole. And June begins her work straight away, digging up Chekhov’s gun from the Canadian snow and getting in the car to drive to where Serena is (how does she know?), but stopping herself at the last moment when she spots her in the window. Luke promises he will find a different way to hurt her, through his connections with the city council and building regulations. It seems so trivial that an evil regime and an evil woman could be taken down that way, but after a conversation with Moira, June relents and lets him try. That conversation is also the first hint that the political situation has shifted. Moira reminds June that this is a refugee town, overpopulated, and any crime committed by one of them would reflect on all of them, and maybe put an end to the already thinning goodwill of the Canadian people. I think maybe this is the first time that the possibility of anti-refugee sentiment is acknowledged, and the cynical part of me is relieved that the show is going there, which has previously never stepped away from the idea that Canada is an absolute haven of goodness.

Back in Gilead, Janine is trying to learn how to walk again, but seems to have found her rebellious spirit again, refusing to concede to Lydia’s religious pleading. She reminds Lydia that Esther is an abused child, that most of this is Aunt Lydia’s fault – claiming to love her children, then sending them off to systematically suffer at the hands of Commanders. It shakes Lydia to the core, enough to approach Commander Lawrence with the idea of reforming the handmaids programme, but he laughs her down when she suggests that the Handmaids stop living with the families of the Commanders and stay at the Red Centre. He reminds her that it is an essential part of the programme to serve these girls and women up to the Commanders like meat, that they “need a little kind in their lives”. This is a reminder about Lawrence, the ultimate cynic of the show, a man who understands how depraved his fellow Commanders are but ultimately unwilling to protect anyone from it. Plus, with the added international attention and interest, nothing can be changed, and nothing obvious can be wrong. Aunt Lydia has always accepted her plight quietly, but I wonder if that will continue now that she’s seen her own cage so clearly. Janine returns to the centre, welcomed warmly by the other Handmaids.

Luke pays Serena a visit and she makes sure that he is humiliated before he delivers what he thinks is the thing that will break her – a building report about all the violations. It seems ridiculous, and she laughs at it, which only spurs him to threaten her himself – telling her he won’t stop June from killing her, or maybe do it himself. Later, in a commotion down on the streets, June fires a warning shot but is stopped by Luke from killing a man, and it’s enough for Serena’s handler to decide that the centre isn’t safe for her anymore (also, Luke’s plan worked! The building is condemned!). While June and Luke reconnect over their small triumph, Serena is delivered to her new place of work – a mansion outside the city, inhabited by an ultra-devout wife who is apparently cosplaying Gilead. The look in Serena’s face when she realises that the little bit of freedom and privacy that she gained is now gone, that she will now be under the constant critical eyes of someone even more devout than her, is priceless.

I do tend to agree that Moira’s inward turn doesn’t gel right with her character – she is the voice of reason, but a reason that is almost demure. The episode explains why that may be (feeling like she’s responsible for the other refugees, can’t rebel because it would put all their lives in peril) but it’s still hard to swallow for a character who was always more outspoken than June.

Janine HAS HAD ENOUGH. Once again, let’s hope there isn’t more suffering in her future, but this show loves hurting her.

I think this season so far has done a great job at showing how scared June is by her own anger, how it feels like a beast she can’t entirely control, even if she wants to. You’d think Serena would be more careful, sending her an invitation note from the cultural centre addressed to “Offred” truly is not how you deal with someone already so on edge.