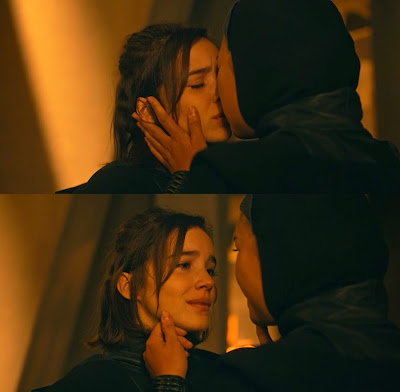 You’re contained. You’re a mystery. A labyrinth, walls within walls, and in the centre, a fire burning to be free.

Late into the first season of Warrior Nun, Sister Beatrice (Kristina Tonteri-Young) presents some findings about the Halo to the current reluctant Halo-bearer Ava (Alba Baptista). It’s historical research into the history of an object, a history that, both know now, has been twisted into fiction to benefit others, hiding both its provenance and true power from the women asked to wield and protect it. This is one of the most emotionally poignant moments of the series, and a standout in the first season, which has provided a lot of exposition to delve into the deep mythology that lies behind it. Beatrice, reading from the personal diaries of the woman who had the Halo in the 1940s, recounts the tale of how she, freed from Dachau, encounters Nazis in a café. After being told that the Nazis were beyond the scope of the Order of the Cruciform Sword by her Mother Superion, she is alone in her rage, fury and terror of those who tormented her. The Catholic Church, historically complicit in the crimes, has asked that the Halo bearer put her life on the line, but does not acknowledge how its responsibility for the fate of humanity may extend to protecting it from the evils of fascism. In the café, one of the Nazi officers sees the tattoo on her arm, and after he falsely assumes her to be Jewish, she corrects him. Lesbisch, she says. Beatrice, when retelling the story, hesitates at the word as if it could cut her. Threatened and driven by rage, the warrior nun tears into the Nazis, unlocking a power within the halo that was previously unknown and documented when she overcomes her deepest fears.

It's a tale that is meant to help Ava face an impossible task: expanding enough power to walk through a wall, for a mission that will ultimately turn out to be very different from what either of them think it is (they will end up inadvertently setting a greater evil free, because they have been lied to). In the context of the moment though, it is a deeply intimate moment between two characters who have been dancing around each other for most of their time together. There’s Beatrice, who has been with the order for a long time, who believes deeply in the mission and has dedicated her whole life to it. She is – later, in the second season, accurately described by a stranger who has observed her as “contained” – the ultimate example of someone who is self-disciplined, focused, single-minded, controlled. There’s Ava, who has spent most of her life in an orphanage after the death of her parents, who was murdered by the woman tasked to care for her, only to be brought back to life by the Halo, and now burdened with the responsibility that comes with it, without ever having chosen any of it. The audience knows how Beatrice has become who she is, even though she has always fallen short of voicing it. Conservative, rich, successful parents whom she has let down somehow with a flaw in her character, have sent her to a Catholic boarding school, from which she has gone straight into being a nun, constantly attempting to study and become flawless, hating whatever they saw in her that made them abandon her (all the while the shows makes it impossible to regard her with anything but awe, as Ava does from the start). It isn’t hard to guess, even before the scene, why she would stumble over “lesbian” in the text, and why learning that you can be both – faithful to the mission, and gay – would have such a profound impact on her. Ava isn’t so much a foil to her as her presence sharpens her – she is so desperate to wring every joy from her newfound life, against the demands of the order, resembling a live wire, impossibly alive, and determined to stay that way.

I watched that first season and enjoyed it, but it didn’t hit me as hard as it does now, going back after the end of the second season. Warrior Nun season one came out in early 2020, during a period of time where the world seemed impossible to grasp. I remember it as a haze of struggling through uncertainty, adapting to new rules, doing nothing else except working a healthcare-adjacent job and watching television to try and soothe the anxiety. It didn’t stand out among other one-season shows like Vagrant Queen and Teenage Bounty Hunters – maybe because nothing stood out anymore beyond providing a bit of distraction while it was on. It got renewed – impossibly – but then didn’t continue until more than two years later, in a world that feels irreparable changed, regardless of how much pretence there is that it's all back to normal. When the second season finally came out two weeks ago I expected to enjoy it, but I didn’t think I’d still be thinking about it, mulling over it, days later, hoping for a third season.

The second season begins after a fight that seemed impossible to win. The order has inadvertently set free Adriel, who put the Halo into the woman who would become the first Warrior Nun a thousand years ago, and is definitely not an angel. They have separated to regroup, struggling because a man they trusted deeply turned out to be a traitor. They’ve suffered losses. Ava and Beatrice, who has been tasked with protecting and preparing her for the next big fight, have escaped to Switzerland, where they are both living something that resembles a normal life, apart from the rigorous training regime. They work in a tourist bar (as an aside, I think part of the great charm of Warrior Nun is how European it is – set all over the continent, characters switching into different languages with ease), they share a small apartment. It’s the kind of soothing normalcy that can never last, and the great conflict of the show – beyond the actual threat of a great evil, rising, like a metaphor for extremism, converting people into a demonic cult, is between Ava’s profound desire to live her life and experience all the things that were denied to her, and the responsibility that she never asked for (but that also saved her life). Beatrice is steadfast in her belief, and was trained to do this from an early age, but Ava wants to dance and drink and flirt (most of those things or all of them with Beatrice, who is a reluctant but ultimately willing participant). If this weren’t a television show about a tactical nun sect, you’d think you were watching a slow-burn romance – there is an abundance of meaningful looks, jealousy and casual touches (which feel even more meaningful because of Beatrice’s containment – it’s obviously not something she’s had in her life previously, and the careful and tender performance by Tonteri-Young showcases her surprise at the intimacy, and how much she cherishes it). For a season that is packed-full with action-laden story, the first few episodes give them a surprising amount of time together before everything goes to hell.

There are many other smaller poignant stories here as well, like Lilith’s (Lorena Andrea) struggle with her own mother’s expectation and disappointment that she didn’t become the next halo bearer, as she was trained and expected to be. She loses her purpose, she loses someone she loves (unfortunately, the enigmatic Shotgun Mary doesn’t make it into season two), she becomes temporarily evil. As much as the show is about Catholic nuns, the connecting tissue between the women in the order isn’t faith as much as it is devotion and love for each other, especially after so many experiences with profound loss. Without that connection, Lilith becomes unmoored. It does, in a way, literally transform her into something beyond human, and her cynicism acts as a counterpoint to the stalwartness and optimism of other characters. There’s lovely Camila (Olivia Delcán), resident gun-wielder and hacker, who finds out that Adriel has planted something in her that feeds off her prayers, an ultimate boundary-crossing transgression. There’s a heart-breaking story of a mother who lost her son and has him return only to lose him once again.

But the emotional centre of the season are Ava and Beatrice, and the question of what it means for a sister warrior to love her warrior nun (not that they’re the first). Beatrice is a student of history, so she knows that warrior nuns never last, that they are always asked to sacrifice themselves for the greater good. Beatrice knows that what she is training Ava for is, ultimately, death (and since Ava can come back from some kind of deaths, Beatrice knows, at least temporarily, what it would feel like to lose her – utterly impossible to bear). What does it mean when that sacrifice is asked of someone who has never consented to the calling? She learns how impossible her choice is when she prevents Ava from sacrificing during a fight, which results in the possible death of some of her sisters – Beatrice has a crisis of faith between her protectiveness and love for Ava and her vows to protect the cause over everything else. Ava is in crisis because all she wants is live life, but even if she decided against the fate the halo has given her, the world as she knows it would probably end, and everyone she loves would die.

Would it be a truer expression of love to run away with Ava and live whatever amount of time they have left, or is it for Ava to make the ultimate sacrifice at the end, to create a world in which Beatrice, maybe for the first time ever, can figure out who she is without the burden of believing herself flawed and unlovable?

Something about this season reminded me of what it was like, 20 years ago, to be so starved for stories that I would go back to the scraps we were fed and watch them over and over again, never really having faith that any promises would be kept. In contrast, how much it means to trust a story, to feel that Michael would never be a foil here, only a red herring with his own tragic story, to feel that in the end, Ava would not only kiss Beatrice before going off to save the world, but tell her she loved her before going into the unknown beyond the arc. In the end, all those small moments, even in the first season, when they were strangers to each other but already finding things to admire and ways to comfort each other, amounts to their final scene together. Let’s hope there will be a third season to reunite them again.