Popular - An eye for an eyeball, a scheme for the bitter. 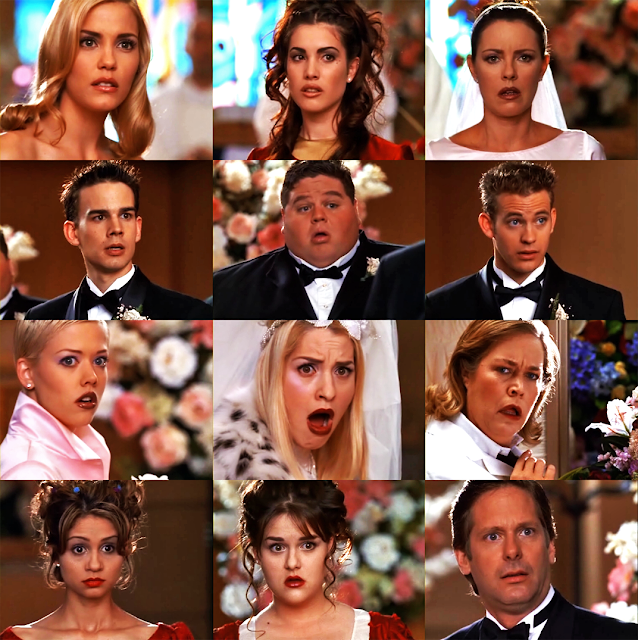 Popular fulfils its potential when the balance between the ridiculous and the serious, heartfelt elements of the show works. Expecting Popular to suddenly become a teen drama show without the occasional moment of over-the-top comedy, dancing, murder plot, dream sequence or comical side character would be denying its nature: it isn’t supposed to be realistic. This kind of freedom sometimes works really great for the show, but sometimes it is a liability, because some of the writers deal with it better than others, and it isn’t always conducive to character consistency and cohesive storytelling. The first season had its high points – emotional exchanges that wouldn’t be possible with actors and actresses who don’t recognize their characters as real, underneath it all. The season (possibly the show, I don’t quite remember much of the second season) had an underlying theme: family, in the widest sense, circle of friends as family in the (physical but also emotional) absence of parents, families that have gone through drama and have grown closer, families that, when faced with the prospect of welcoming new members, struggle.
Popular is also about being a teenager in school. The characters try to figure out who they are, both as part of a specific circle of friends and by distinguishing themselves (occasionally violently) from others. In the beginning of the show, Sam is as defined by her friendship with Lily, Harrison and Carmen as much she is by her opposition to Brooke, Nicole and Mary Cherry. At its best, Popular managed to blur the clear distinction between the normal and the popular kids, it pointed out that Sam sometimes discriminated against others just as much as Brooke and Nicole did, that the hacking order in high school is painful for everybody, even those who are seen to profit from it most.
At its worst, Popular didn’t take the characters and the struggles seriously enough to tell a meaningful stories, or worse, tried to tackle a serious issue a failed terribly. It’s probably obvious that I struggled a couple of times during the first season – but often, after a particularly disheartening episode, I’d discover that the very next one would succeed at everything. I think whether or not Popular ultimately succeeds for each individual viewer depends entirely on how relatable the characters are now after 22 episodes, if we find ourselves caring about them or not.

If you don’t care about the characters before Two Weddings and a Funeral, the episode isn’t likely to change that sentiment. If Popular had ended after just one season, the finale would have been a completely ridiculous send-off – a massive fuck-you, in a way, to the world, a celebration of everything that made the show different and weird, a 45-minute-long showcase of all the things other shows couldn’t pull off because they are limited in their ability to go over the top. It isn’t an episode that relies on true emotional moments or serious issues – it’s a dance party, ironically commenting on itself in title cards and subtitles (it promises all the possible sweep stunts in the beginning of the episode: weddings, a pregnancy, death, a natural disaster, an appearance by a cheesy boy band, pretty boy nudie shots, when pets attack, and finally, gratuitous musical numbers).
The plot, in summary: on the final day of the school year, everybody is ready to leave early after receiving their grades, but Bobbi Glass has sent out pictures of her students to all the possible hang-out spots (and police stations), and is handing out Ds left and right. Therefore, the students are disgruntled and plan their revenge: they settle on giving her an E-Coli shake, but before even taking a sip, Bobbi Glass drops dead. Her sister finds the guilty-looking party assembled and blackmails them into remaining quiet. Lily, while sinking into the depressive depths of Bobbi’s journal of haikus and wishes, finds out that she was both a very, very sad teacher and not exactly smothered in sisterly love (“WHY DO I HAVE TO SHARE A BED WITH ONE WHO DESPISES ME. SAD.”). Also, as we find out, she isn’t quite dead, just trapped in her body while her angry sister plans the most painful way of getting rid of her (one, having hungry kittens nibble at her extremities, two, having her organs donated, three, burying her alive). In an inconsequential subplot, May Tuna is about to die from a bacterial infection and her last wish is being close to Brooke (and popularity), so she just hangs around the dinner and the wedding, along with the seemingly dead body (eventually actually in a coffin) of Bio Glass. The showdown (with a cliffhanger and everything) occurs at the double wedding – Jessie is exposed as the murderous sister, Bobbi re-awakens (after the doctors at the hospital found out that she doesn’t have a heart), and May Tuna drops dead after not receiving said heart to save her life.
But what is Carmen’s secret? Will Jane and Mike get married even after the sudden re-appearance of Brooke’s mother, pointing out that she never got legally divorced? Will Josh and Brooke’s reunion last longer than the summer (“Dear Brooke, I guess it was plotting the death of Miss Glass that made me feel so close to you again.”)? Will Nicole ever look gayer than in her bridesmaids-outfit? TO BE CONTINUED.

In case this wasn’t clear: The point of the episode is that there is no point to the episode. It’s fun and entertaining, but there is no substance, not one single exchange that will be relevant later, only the plot development of Brooke’s mum coming back, preventing the wedding from actually happening.

Nic in Harrison’s yearbook: “Rot in hell, zit-faced homo.” Harrison in Nic’s: “Hope you cure all your STDs this summer, love, Harrison.” Must be love.

“Dear Harrison. The sight of me makes my thighs sweaty. I can’t hold you back a year, but next year I can, and will, hold you in my tender, sexual embrace. Love, Bio Glass.”

Sam: You guys are hilarious, you’re like one of those typical TV show couples that breaks up, gets back together, then breaks up and gets back together one last time on the last show strictly for commercial sweeps purposes!
Brooke: I know!

Lily, with the meta: “What about my story? When am I getting some screen time?”

In case it isn’t obvious from the recap, I am not entirely sure it was a good decision to go with a completely OTT finale instead of something… a little more heartfelt, but I do enjoy the musical numbers. The people singing instead of the actors are weirdly appropriate, too. Mary Cherry’s sounds like she should record a James Bond theme song.

Carmen: You keep vials of E coli poisoning in your purse?
Mary Cherry: A girl never knows when to lose the odd fifty pounds!

Bobbi: After a nuclear apocalypse, I’ll be the only thing standing other than cockroaches and Cher.

Favourite reactions to Bobbi’s collapse: Mary Cherry immediately performing an emergency tracheotomy, Nicole deciding that they should just frame “Spam” and everyone agreeing with her.

During the show, there’s a bar at the bottom of the screen keeping track of which character the viewers would most likely see killed off: the second Mike starts his big speech at the wedding dinner, he takes the lead.

The only potential “real” and somehow moving thing about the episode is the fact that Bobbi Glass has previously been established as a tragic character (she is lonely and constantly fails to make meaningful connections, she needs to work extra jobs to make money), and now the only person who seemed to be close to her turned out to be a crazy maniac.

Ryan Murphy once again with the “spot the offensive ethnic stereotype” game he enjoys playing so much.

The other good thing about the episode: providing a picture of Sam and Brooke walking down the aisle together. It’s fate!

Around the time this episode aired, I remember loads of other shows doing the musical thing. I think Ally McBeal with its massive reliance on musical numbers happened at the same time, Xena had a musical episode, Daria’s is really really good. Once More With Feeling came out more than a year later.

Quick, name the boyband Harrison, Josh and Sugar reminded you of! (for me it was the Backstreet Boys, but there are plenty of other equally valid choices when it comes to late 1990s pop music)

“Gareth used to prefer funerals to weddings. He said it was easier to get enthusiastic about a ceremony one had an outside chance of eventually being involved in.”
at 05:49

I actually really enjoyed the season one finale. I always like it when TV shows break the fourth wall, and I think Popular has, over the course of the series, developed a nice balance between the serious issues and the self-referential silliness. And, honestly, I think by this stage in the season, if you haven't got to know/care about the characters, you're never going to.

"Will Nicole ever look gayer than in her bridesmaids-outfit?" Love it! :D

Thank you so much for all your blogs here. I can't wait for you to start analysing season two!!

I liked the episode, actually. It was entertaining and funny, and the fact that the show can pull off an episode like this is one of the reasons why I like it so much. I think what bothered me a bit was that it could have had a greater emotional impact if there had been a bit more seriousness - because obviously I do care about the characters, a lot.
I'll start with season two soon! School has been messing with my schedule for the past weeks but things are looking up :)