Popular - You still have time to undo your mistakes. 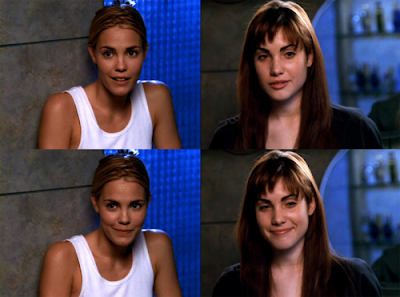 Popular: 1x21 What Makes Sammy Run.
Short review for the penultimate episode of the season!
It’s back to the classics, when a particularly haunting lesson influenced the travels and travails of our characters, shaping their perception of themselves and the world. The novel of the week is Crime and Punishment. “One lie leads to anther until the emotional burden is too much to bear” – and the lie everybody starts to tell is that Sam is still around, when she is not. She has left, and Jane is stressed out about her bridal shower, so Brooke decides that they need to keep up the lie.
Meanwhile, Sam is trying to find Brooke’s mother in San Francisco, hoping that giving Brooke back her old mother is going to keep her from wanting a new one. The person she suspects is now running an art gallery and denies ever having been married to Mike or knowing Brooke, but Sam is persistent, camps out in front of the door of the gallery, and guilts Mrs Foster into taking a really long look at a picture of Brooke McQueen – which leads her to eventually reveal that she is indeed her mother.

Horrormom: When a person has done something like I have, the only way to live with it is to pretend it didn’t happen. But you remember the small things. And that’s the punishment, that’s the prison.
Sam: Like what?
HM: How she laughed when she played, the way her skin smelled when I held her.
Sam: You don’t have to give those things up.
HM: I’m sorry, but going back is not an option for me. It is for you though. You’re lucky, Sam. You still have time to undo your mistakes.

In order to cover up Sam’s absence from the party, Lily, Carmen and Brooke cut up some of Sam’s old tapes to manufacture a fake conversation with Jane, which almost goes horribly wrong, then doesn’t, until Carmen throws up all over Jane’s wedding presents and admits that Sam is missing. But Sam isn’t missing! She’s back, carrying a beautiful present for Jane, somehow having learned a valuable lesson about admitting mistakes and the importance of families (she tells Brooke that her mother’s name is “Jane McPherson, soon to be McQueen, and she loves you very much”), even if they aren’t biological!

Sam: I know I haven’t been too good at sharing up until this point, but I’d like to start trying.
Brooke: I’d like that. I never thought I’d say this, but I’m really glad that you’re back.

In the final scene, Sam reconciles with her mother, saying sorry for putting her “through hell”, explaining that she was afraid it would destroy their relationship if they admitted other people into it. “Nothing will, ever. We’re a team, no matter what”.
Well, TO THE (DOUBLE-)WEDDING THEN!
Random notes:
In a rather unfortunate sub-plot, Sugar, Harrison and Josh kidnap Mike for his bachelor party in order to get into a strip club, which is exactly where the Blondes minus Brooke are also headed in order to make some good money and make Mary Cherry famous (and help her punish her mother for marrying Erik Estrada). This leads to admittedly vaguely funny scenes (also, Clea DuVall, whose character has recently moved into a stall in the Novak and developed an addiction to blue toilet stones, makes a reappearance), but sadly also to Harrison saying “they’re just whores”, which I would like to have erased from my permanent memory because this isn’t a word anybody should EVER USE AT ALL, but especially not to describe women working in strip clubs.
Josh really just came for the chicken.
“Please welcome to the stage: Miss Erika Estrada! Miss Lola. And Miss Brooke.” (Nicole cares about Brooke enough to use her as a stripper name! That’s devotion, guys!)
Emory’s false IDs: Phil Goldfarb, Ryan Murphy (both producers of the show), Doctor Robin and Mister (no! Captain!) Shatner.
Nicole’s interpretation of Raskolnikov: “He was weak, he should have held out longer. Thank you.”

Carmen: Don’t you see, the sorta is a sign that she can hear that sewing machine working
Brooke: Why is she near a sewing machine?
Carmen: Because her psycho kidnapper wants to turn her into a man vest? Oh sweet Hannibal Lecter, I can see it so clearly now.
Brooke: What do you see?
Carmen: Sam. Moisturizing.

IT PUTS THE LOTION IN THE BASKET. Also, someone should get Brooke Smith a really good role in a decent television show. She is awesome.
You may know Peggy Lipton, who plays Brooke’s mum, as Norma from Twin Peaks. Also, her character is now married to Ray Wise, who will never not be creepy.
Obscure pop cultural references:
Sam has “done some internet research”. Kids, there once was a time when there was more than one search engine, and the name of one was not synonymous with “looking stuff up on the internet”. Altavista, whoo (it's still the number one search engine in Pawnee!)!
at 23:24