Ellie & Abbie (and oh no, why did it have to have teeth in the title) 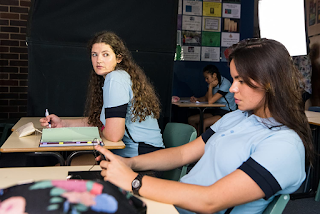 Monica Zanetti’s Ellie & Abbie came out shortly before Christmas, but is not really a Christmas movie – but it’s difficult to think about this film and not also have in mind this season’s big, gay Christmas movie, one that amazingly made it to the big screen and was heavily promoted on the way there. I came out of that one not really disappointed, but exhausted, because I spent about three fourths frustrated and a bit angry, a kind of feeling I didn’t think to expect of a film made by a director I admire. It was kind of like those teen films of old, that to me had more of a happy ending when viewed in reverse (most obviously, She’s All That). Compared to that, Ellie & Abbie succeeds. It starts off as a classic teen comedy, in which a closeted main star (Sophie Hawkshaw’s Ellie) is trying to figure out if her crush Abbie (dreamboat Zoe Terakes) is into girls as well and how to ask her to prom. Then, out of nowhere, a guardian angel for gay teens appears: Aunt Tara (a great Julia Billington), who died in the Eighties before Ellie was born and hasn’t really been mentioned since. Turns out, Ghost Aunt Tara was gay too, and has much (varied) advice to give. What could be a standard comedy from here-on-out becomes a lot more serious and a lot more sad – it turns into a film of unprocessed grief – when Ellie comes out to her mum and her mum is less then supportive, something that takes Ellie by surprise, and the audience as well, since the mum is played by an unusually dishevelled Marta Dusseldorp (usually ultra-composed, and yes, also gay, in Janet King). I find parental homophobia hard to take in films, because I’ve spent the last 20 years of my life watching as many films in which I could possibly be represented as I could, so I feel like I’ve seen every iteration of this trope that I possibly could. In Happiest Season, I found the parents absolutely insufferable: they were homophobic not even because of genuine belief (which isn’t an excuse), but because of concern about social standing and a future political career in conservative politics. Any attempts to appease them to the detriment of your beloved appeared cowardly and ridiculous, and was ultimately unforgivable  (yes, this film makes Mackenzie Davis unlikeable, another thing on the long list of unprecedented things in 2020). Here, thankfully, Zanetti takes a different course, when Ellie, in a history presentation by the person she wants to ask for prom of all moments, realises that her dead ant was killed in a homophobic attack in the 1980s (the killing is not something that happened in the portrayed real protest, but the cultural context of it is real), a traumatic event that her mother obviously never overcame. Her mother’s placating concern about future grandchildren in fact just hides the much truer fact that Erica worries about her daughter’s very life, since the only reference point she has is the brutal death of her only sister. It’s a surprising turn for a film that on the surface was meant to be a teen comedy about asking someone to prom – one that works, one that leads to a happy ending that feels deserved. I’d watch this again, and I wouldn’t Happiest Season, as revolutionary as it is that the film got made in the first place and was distributed as widely as it has been. 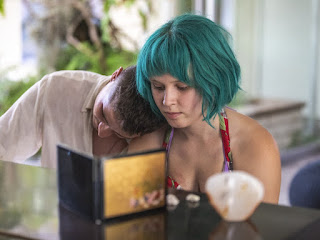 Conversely, Shannon Murphy’s Babyteeth in about grief in a much more tangible manner, but sneaks up on you similarly. It begins with Milla (Eliza Scanlen, who will never not evoke goosebumps in my brain, thanks Sharp Objects) stumbling across a young man (Toby Wallace) on a Sydney train station, and adopting him/being adopted by him. She provides money, he provides a haircut. She appears to be from a wealthy family and unburdened by financial strain, Moses has a substance abuse problem and has been kicked out by his mum, presumably for stealing. Of course, beyond the surface lurks depth: Milla’s dad, a psychiatrist, is keeping her mum constantly sedated with benzodiazepines, and we later find out that Milla is suffering, and ultimately, dying from cancer, a fact that neither of her parents have had the capacity to even remotely deal with. In the face of the unbearable, they make an unconventional decision: they sort of adopt Moses (a 23-year-old man), because Milla loves him and they want her to be happy. Dad will provide the drugs to keep him off the streets, while mum, in an attempt to be present for Milla’s last months, tries to go without the drugs that are numbing her.

What sounds a like a too-high-concept approach to a cancer story, a story about impossible grief, actually works on screen, mainly because of the fantastic acting and beautiful camerawork.  What could very easily be an icky and highly problematic story about a very uneven relationship works, since Wallace approaches his role with a lot of care and his character is painted to very consciously balance Milla’s needs and his own addiction. Babyteeth is deliberately quirky, but never takes it too far, grounding the story in relationships.