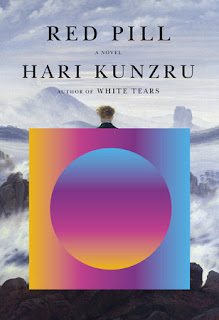 I never expect novels by non-German or Austrian writers to take me back to my eight years of German literature education, in which we dis- and reassembled poetry, traced styles back to history, poetry back to the trauma of the Holocaust, eminent German 20th century writers away from their well-kept secrets about their activities during the Second World War. Of course international scholarship exists, and of course within Europe, both academics and students travel wide and far. But regardless – having the narrator go to Wannsee to study lyric poetry, to write a book about the self in it, a project that almost immediately spirals into a rabbit hole when he finds himself addressed in one of the poems, instead of the self of the author – felt disorienting. A fitting feeling though for a profoundly and deliberately disorienting novel.

The main character, at a crossroads within his career and not entirely sure where he is going (perhaps in the midst of a mid-life crisis, although if anything Red Pill deconstructs the cliché of a middle-aged man in crisis) begins a three-month residency at the Deuter Centre, a fictional institution on Wannsee, close to the conference centre where the Final Solution was born, a fact that looms over the writer’s stay there. Where the centre itself turns out to be hollow, stripped of its history, its darkness appears to have infiltrated the surrounding area, with an employee at the centre deciding that the writer should join him at a shooting range to get him out of his funk, and other ominous signs looming. In a central scene, two fascist infiltrators enter the Deuter Centre posing as historians, eager to absorb its Nazi history, while the head of the centre reassures them repeatedly that there has been a clean break, that there is no continuity between the past and the presence, even though the money that industrialist Deuter put into the institution came from his successful business during the Second World War, even though the grounds and buildings once belonged to Jewish Germans, and were never returned to them. This interlude comes way into the novel, after weeks of the writer struggling with what he realises is the Centre’s ethos: absolute transparency and cooperation. It’s an immediate conflict, because the writer seeks solitude to find clarity, but the centre is perhaps secretly a research facility into what humans do when they are constantly observed, or maybe just accidentally ideologically obsessed with an openness that to the increasingly paranoid writer reads like a conspiracy. The Centre demands that he works in an open office situation with other academics, one of which is hostile to humanists and humanism, and questions the existence of the self that the author is investigating. The narrator finds it impossible to work, to write while observed, and builds a nest of sorts in his room, until he spies a wall of screens in the belly of the beast that makes him believe that there are cameras watching him there as well, in addition to the fact that his working hours are logged, his internet search history and keystrokes printed off in a neat summary weekly. It’s a creepy place, one that becomes creepier once a cleaner, Monika, tells her own story in an interlude towards the middle of the book: she grew up in Eastern Germany, a punk, and fell into the hands of the Stasi (state security), which ironically were creating a state of “transparent humans”, in which everyone was a potential informant, and privacy ceased to exist. The novel never draws the obvious parallel between that ideology and the narrators experience at the Deuter Centre (where the transparency appears to be meant as a historical response to fascism, but accidentally creates a situation that mirrors Monika’s desperate history in the DDR). But the best thing about Red Pill is that it doesn’t always have to spell out its conclusions.

The narrator spirals into his paranoia, and his attempts to write about the self turn into an inability to locate his own self within the story he is experiencing. Instead of writing, he becomes obsessed with the suicide of 19th century writer Heinrich Von Kleist, whose grave he visits: the poet killed himself and a friend on the shores of the lake. He also falls into a more contemporary hole, an ultra-violent police drama in which a bent cop commits atrocities and perhaps loses his family to violence, even though the narrator’s stream cuts out before he can find out for sure. He finds hidden messages in the show, obscure references to historical writers, the kind of details that would only become obvious to someone who knows how to study texts, who would then go online to discuss these findings in great detail – and it becomes a rabbit hole of sorts, one that becomes all-to-real when he meets the creator of the show, Anton, at a celebrity party in near Berlin (where Syrian refugees are ever-present, and the diverse political reactions to them). He attempts to interrogate Anton about his worldview, or maybe just to find reassurance that the nuggets of obscurity he has discovered in his text were intentional, not imagined, but what he finds instead is a radical neo-fascist, who sees in the narrator the left-leaning liberal antagonist that such fascists hate the most.

The moment when the narrator realises this about Anton is perfectly written, a sudden twist in a narrative that has before this moment pointed elsewhere (and perhaps, hasn’t quite made it clear why the novel is titled Red Pill, that misunderstood detail from the Wachowski sister’s Matrix). Anton takes the narrator to a Turkish kebab shop, where the two friends he brings speak openly about their hatred of migrants, of non-whites, and demand their right to cultural purity. The racist language, so familiar now in 2020, sneaks into the text, and in the end, facing the outraged narrator, who is horrified that he has been associating with these fascists, Anton tells him that he has succeeded in his intention: he will now rent-free in his head, become an obsession.

And so he does. Red Pill argues here, in a way, that this novel form of neo-fascism is like a virus capable of infection, that its memes and its obsession with mythology work like lines of code. The narrator begins following those traces deep into the right-wing web, finding what he thinks are trolls who are spewing that same language, creating a whole world of conspiracies and foundation myths. Anton does become an obsession for the narrator as he spirals further away from his reality, his family back home, and he follows Anton to Paris, where he has made a short film containing all the secret Nazi symbols, the fascist rhetoric, and is highly lauded for it. The narrator begins to think of their relationship as a duel between warring world-views, between secular humanism and a view of the world as a zero-sum game in which only the strong have the right to survive – and he finally goes to Scotland, to maybe kill Anton, or maybe kill himself. It reads like a final fight in an action film between protagonist and antagonist, until it doesn’t, until it obviously becomes the story of a deeply mentally disturbed man who has had a breakdown. Except, of course, it is both, and Anton is real, and has infected the narrator, and the world.

The fall-out is an attempt to return to normality with his wife and child, heavily medicated, with the 2016 Presidential election and its outcome looming. He gives up on explaining what has happened and what Anton is, only sees that the barrier between the world he has taken for granted (in which young, urban men, well-dressed and with hip haircuts, are assumed to be leaning left-wing) and the horror-world of Anton’s fascist imagination has disappeared, the outcome of the election becoming proof of concept. A therapist he sees does not comprehend his concern, and argues that the best cure for such ideology is sunlight, that exposed to the world, such views become ridiculous – but the narrator knows better now, has seen the virus for what it is, as have we, four years later, after Charlottesville and everything else.