The Handmaid’s Tale – Now there is tending to be done. 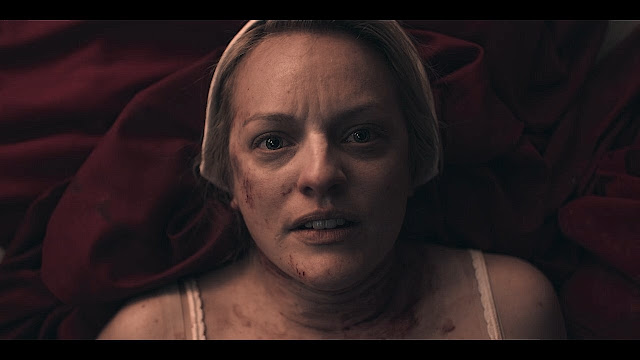 My world can’t be small. Not now.

In our world, it has been almost two years since the previous season of The Handmaid’s Tale. I can’t pinpoint if that is the main reason why this episode feels so emotionally distorted, as if the perspective were skewed by a warped mirror, or if this is simply the intended effect of a story that portrays severe PTDS. In any case, we’re going down the rabbit hole, unmoored entirely from the novel the series is based on. \

It is, here, only moments after June saved the children of Gilead by putting them on a flight to Canada. She has been shot, but also saved many of the other Handmaids, and they make a successful escape to a safehouse, and then onto a truck that smuggles them – to a mysterious place that may be the base, or one of the bases, of Mayday. It’s a remote working farm so far away from the restrictions of Gilead that it would be easy to forget that they are still well within its borders, if it weren’t for the fact that there is still a wife here – wearing wife clothes – and that the soldiers of the resistance wear Guardian uniforms. You can’t really outrun something that has eaten its way into the minds of everyone, that has created so much trauma in everyone’s life. For June, that trauma for now is the painful and debilitating gunshot wound in a world without painkillers, in which penicillin comes from literal moulding fungi, and wound salve from herbs. The body she has always taken for granted, that she has relied on, is no longer reliable. At the same time, what she personifies – the woman who transported the children of Gilead across the border – is too valuable for Mayday to lose, so she ascends to a different plane than the women that helped her.

This episode makes it easy to forget the outside world for a while. There are short scenes in which Commander Waterford and Serena find out that their situation has changed now that the world’s focus is on the saved children of Gilead, that Mark wants to reunite with their families across the border. Commander Lawrence appears to be landing on his feet again, with the help of Nick, even though there were moments last season where his only wish appeared to be death (except the glow in his eyes when he speaks of June’s legacy, of a Gilead that begins negotiations with the outside world, is terrifying). But for the most part, we stay with the women that have travelled with June to this entirely new place. Janine befriends a pig, but then has to say goodbye when it is slaughtered to feed the newcomers (the show continues its old ways in making Janine’s life as bad as possible). The wife of the house, Mrs Keyes, is a child – a child bride, deeply traumatised by the fact that her Commander wanted a child so badly that he invited other men to rape her. June recognises how dangerous her fury is, how, if it remains undirected, it may turn against her, against the women she wants to protect. There are no simple interpretations here – we will see where the season goes with this – but it’s hard not to feel a cold shudder when June decides how to channel Mrs Keyes fury, what target to give it, so that she ends up soaked in the blood of one of her rapists, spooning June, receiving the love of a misplaced child. We already know that nobody gets out of this unscathed, but maybe we’ve reached a turning point of horror here. When June says that she needs to do tending, she means her own body, but maybe also the kind of rage that will create a violence to equal that of Gilead.