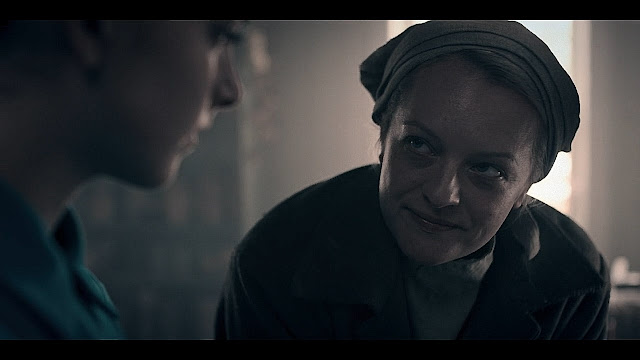 Gilead makes it really hard to be good.

In Gilead, June and the other women on the farm are preparing to move on, since their safehouse is no longer a haven – Guardians are investigating the disappearance of one of their own, and going farm by farm to find out what happened. It means leaving behind Mrs Keyes, because otherwise, this safehouse essential for Mayday operations would be burned – and where else would you find the perfect combination of a senile and incompetent Commander and a self-sustaining, working farm that appears to mostly exist outside of the eyes of the state. June knows this, but she also knows, intimately, from what Mrs Keyes has told her, about the repeated abuse. And it is also important to remember that referring to her as “Mrs Keyes” very successfully masks the fact, the horror, that she is a child. 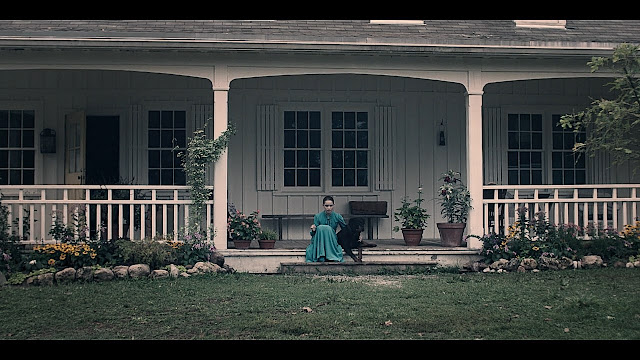 A child that June appears to be in the process of adopting as her own, which fits – Hannah is beyond her reach, Nichole is beyond the boarder, and in any case, June is now so far removed from any conventional motherhood that it would be difficult to reconcile it with her resistance activity. Mrs Keyes on the other hand fits right in, because she is deathly furious, and has been for a long time – long enough that her Commander’s medical state seems to have been caused by her consistently and slowly poisoning him with nightshade, a fact that comes in handy when June begins planning her first big political act after “Operation Angel Flight” (what Moira, Emily and Luke have branded her saving of Gilead’s children). After meeting a local Mayday operative in the local Jezebel’s, June decides that she wants to both free the women there and do damage to the Commanders who are meeting there to discuss some military operations, likely the same ones that Commander Lawrence and Nick discussed in the previous episode. June is awakening, and it’s beautiful, but also terrifying, not that far off from Emily’s act of vengeance a few seasons ago.

Except, in the end, it all goes horribly wrong. June delivers a bottle of poison to the women of Jezebel’s, and leaves before things there being to come together, but back at the farm, snipers take out the Guardian that has been helping them, and Nick appears and asks about where the other Handmaids are. Nick, the ultimate pragmatist, who cares about June, but wouldn’t risk his own life for the resistance. Who offers June her life in exchange for that of the other Handmaids, claiming he is helping her, not comprehending that June is now thinking collectively, not individually.

Across the border, Luke, Emily and Moira are busy with the fall-out of June’s heroic act, and it takes a while for Moira to admit that this feels like cleaning up June’s mess, that as amazing as that act of heroism was, June probably didn’t really consider what it would mean to safe these children beyond just getting them across the borders. More than 80 traumatised children, some of which do not remember a life before Gilead, who believe that their fake families were real, who are missing parents they thought were theirs and can’t adapt to the Canadian life with the family of their lost biological parents. These adoptive parents are enthusiastic to raise children, but when Moira visits one of them, she realises that they maybe underestimated what it would mean to have a child of Gilead in their household who has lived a life of thinking that Gilead is normality. On the fringes of this, there are gentle signs of things normalising for Moira, at least: She is dating someone (ZAWE ASHTON!), even if it is hesitant, and Emily seems happy for her, but maybe also a bit sad for reasons that I hope we’ll find out more about later on (it appears as if maybe Emily no longer has a family to go home to?). 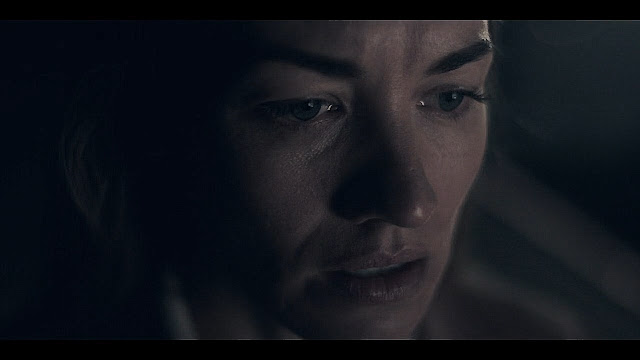 And also across the border, Serena undergoes a detailed medical check-up that reveals the abuse she has suffered – and while the nurses and doctors, and her defence lawyer, suggest that this is a clear pattern of victimhood at Fred’s hands, Serena is hesitant to call it that, pointing out that this is more complicated than these women think. It’s an interesting thread, an interesting space, to consider that Serena built the ideology of Gilead that Fred then used to hurt her, to make her small, but an ideology that Serena also used to abuse other women, especially June. There are no clear lines of victimhood here, but Mark needs her to be a convincing witness against Fred, which means that she needs to be a more convincing victim of Fred’s violence.

Serena promises that she can change Fred’s mind about his accusations regarding June, but Fred is furious with her, and a reconciliation between them appears to be impossible, especially when Fred insists that, if anything, he should have been stricter with her, while Serena still hopes that being beyond the reach of Gilead will bring back the man she married, instead of this person warped by power. And then Mark reveals to her that she is pregnant…

I noticed that there appear to be a few Belters (fittingly!) in the resistance, but unfortunately, one of them meets a tragic end in this episode. I hope Brianna makes it out of the farmhouse alive.

I thought the scene after Rita spoke at the fundraiser was very interesting, because Moira and Luke want her to be a certain way and she, in her very idiosyncratic way, refuses to be exactly that. She is way too complex to fit in neatly into the fundraising narrative of June’s heroic act.