The Handmaid’s Tale - I’m not nervous, or worried, or scared. I can’t fucking wait. 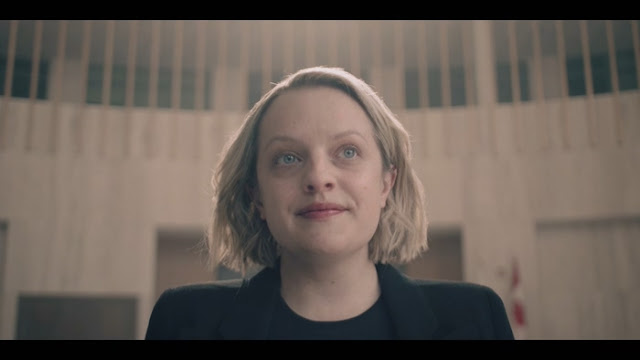 What happens after Gilead? June is a refugee in Canada now, a star-witness in a international human rights trial against Commander Waterford, someone deeply scarred by her experiences. What she, and the other women who have escaped Gilead, experience now is other people who did not share their trauma having expectations of how they are meant to react. Moira’s support group – a circle of chairs in a public library – is about moving on, finding a way to integrate Gilead into the new reality. But this episode pits Moira’s idea of moving on against June’s. Moira wants the women she is guiding to work through their trauma through forgiveness, June doesn’t necessarily want to move on, and instead focus on justice and revenge. She isn’t afraid to face Fred in court, she is excited to reveal the evil of Gilead.

An evil that still continues. June has crossed the border, but Gilead continues to exist, and in a way, this episode reveals what is at stake back there as well, not just in the lives of the women that have left. Aunt Lydia is back at it, raging, feeling ostracised by the other Aunts who are mocking her methods, to the extent that she tasers the worst offender. Then Commander Lawrence brings her to Janine, who has survived the bombing of Chicago but is once again returned to the worst place in the world. In a conversation between them, Lydia reveals that she regrets deeply what has happened to Janine, but has no comprehension of her own role in her suffering, and instead attempts to turn Janine against June. When Lydia tells her that poor Janine keeps losing the people she loves, she forgets who is doing the taking. It reveals how far Janine has come – because the things Lydia says about June are true, she is selfish, she does put others in danger, but she is also a million other things, and Janine knows that now. She begs to not have to return to being a Handmaid, but we now that Gilead, stressed and fractured, cannot spare her, that Lydia’s grasp on power is limited. Poor Janine is once again paying the price.

June reads out the statement in court about all the horrors that have happened to her, a summary of atrociousness, of crimes against humanity, a prosecution of Gilead. Fred does some grandstanding about how all of these atrocities have contributed to a rising birth rate, and then his defence lawyer attempts to victim shame June, claiming that she had a choice to become a Handmaid (the alternative, June points out, would have been certain death in the Colonies, but the defence insists it was still a choice). The lawyer attempts to shame her for having an affair with a married man, but instead of answering to these accusations, or dismantling them in a pointless attempt to argue with someone who does not recognise her humanity, June simply walks out, owning the moment entirely. 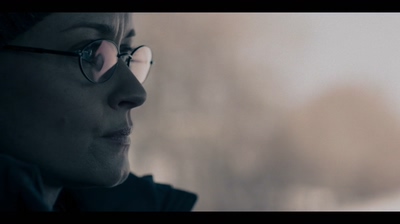 Moira and June’s mismatching ideas about the future come to a head when a woman appears at the support circle – an Aunt who knew Emily, who was responsible for the woman she cared for dying, for her mutilation. Emily is unwilling, unhappy to face her in any way, retreating into herself, and Moira tries to protect her, but June thinks the path towards healing for Emily is to confront the evil that was done to her, to lay the blame firmly at the feet of this woman who is an accomplice of Gilead. June thinks that there can be no forgiveness for heinous acts, for this level of inhumanity, and it’s hard to argue with her. The Aunt asks for forgiveness and Emily utterly denies her, saying that she can do nothing to earn redemption, that her deeds will haunt her forever. Later, driving towards another meeting Emily finds her hanging on a roadside tree.

Moira: I think we’re all better than the worst thing we’ve done.

As stunning as June’s victim impact statement during the first step of the trial is, the most emotionally wrecking scene of the episode is when the women meet again in their support circle, laying their feelings about the Aunt’s suicide bare, with Emily remaining quiet and remote until June calls on her to share her feelings. Alexis Bledel has always played this character with tremendous restraint, which is so easily and falsely confused for timidity. We have seen Emily rage – the bloodbath when she ran over Guardians, what she did to the Wife in the colonies. I’m not sure if June expects it when Emily tells the circle that she is glad about the suicide, that she hopes she had something to do with it, and opens something up in all the other women. Once Emily utters the words, it’s like permission for the other Gilead escapees to share their own need for cleansing revenge, not forgiveness, and Moira feels them drifting away from her. June is learning how to shape rage into a weapon, and she has just found an army to do it with.

June: Why does healing have to be the only goal? Why can’t we be as furious as we feel?

This episode has both Portishead and Massive Attack, much like a lot of other early- to mid 2000 TV shows.

Luke is desperate for June to move on and to speak to him, but June finds it impossible to share her story with him – she asks him not to come to the trial but he does, to find out what happened to her. It’s difficult to see how their relationship will heal from this, but there won’t be much else left for June apart from revenge now that she is losing Moira as well.

Also, after Fred’s grandstanding, he and Serena find that there is support for their ideology even in Canada – people are now protesting for them (I’m glad The Handmaid’s Tale is going there, acknowledging that borders don’t protect from the spread of deadly ideologies).