Y: The Last Man – No one can hide forever when the whole world’s looking. 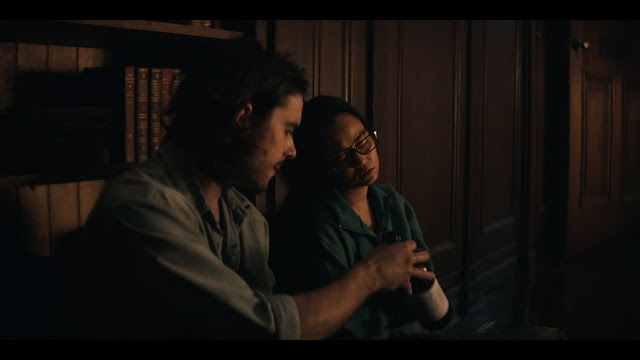 Yorick: Do you care about me as a person?

Sarah: Not even remotely.

Yorick and Sarah have arrived at Harvard to find Dr Allison Mann (Diana Bang, pitch-perfect), but realise that the campus is basically under siege: protesters regularly attempt to take over the building, while the military beats them back with tear gas and non-lethal projectiles. This appears to be the first time that Yorick realises how divided the country is, and how much of the people’s ire is directed towards his mother, President Brown. In another moment that proves he never listens to the woman who is trying to protect him, he once again wonders off even though she’s told him to stay set, and meets some of the protesters, who are not quite what you would have expected from the masses in front of the White House, and the characterisation we have previously gotten. Instead, their grievances seem legitimate (after all, Yorick himself is proof that the government is keeping secrets from its people). Luckily for Yorick, the women he meets (who are maybe former students?) think he is trans, and also that he is a supporter, even offering him a contact for testosterone (another irony that this just comes to Yorick even though he doesn’t need it, while Sam is struggling).

They fail to find Dr Mann in her apartment, and while Yorick spins theories about how far removed from the reality of the working man this Harvard lecturer will be, the woman they end up finding in her campus office is very different from what he expected. She immediately realises (after stabbing him a little bit – he totally had it coming though) that he has a Y chromosome and gets excited once Yorick tells her about Ampersand, and she’s a second away from getting to work then and there. She does tell them that she needs to go to San Francisco because her own lab equipment here has been destroyed in the protests and the one across the country is the only one holding the (shady, borderline illegal) tech she needs to figure out what has kept Yorick and his monkey alive. She isn’t very secretive about how her research doesn’t exactly meets the standards of American regulators, and is disdainful about such restrictions, but to be fair, Sarah hasn’t much ground to stand on to criticise for it as she spends the whole episode doing shady shit without telling anyone about it.

For one, she does track down the Massachusetts address she retrieved from the secret base she raided earlier, and it turns out to be an abandoned mansion – abandoned apart from the other Culper Ring agent (played by Lou Jurgens), whom she has a Terminator-off with until they begin to talk. They mention a mysterious woman whom they expected to find there, the same person that recruited them, Nikita-style, from maybe foster care, maybe juvie (Sarah remains secretive about her past, but hints that she does have people who miss her). This other agent is furious with this woman and says she will kill her if she finds her, and then finally begin living a normal life (a hint at how bad their lives must have been, if she can envision a normal life in the apocalypse), but it’s Sarah who grabs one of the trackers. Also, she does not, at any stage, track down a new satellite phone to call the President and update her about the state of the mission, which is significant because she does lie about it to Yorick, and makes the single-handed decision for them to go on a road trip to San Francisco.

Meanwhile back in Harvard, Yorick bonds with his future scientist (Sarah does tell him to “charm” her, as charm is the only talent that she can come up with for him), and he does manage to have a sort-of productive conversation with her about the state of the world, in which she explains to him exactly how weird and non-binary sex is and how humanity has lost so much more than just men in the event. She grieves for biodiversity, for animals, for the brilliant women with Y-chromosomes that were lost (and somehow it feels like that particular loss is personal for her?). She also points out to him that from now on, he won’t have much of a life that’s his, and this is literally the first time that this has even occurred to Yorick – he definitely doesn’t like it.

In DC, the return of Secretary Oliver means that the great power struggle is beginning. There are disagreements over how to greet her, how to manage her ambitions even before she lands, and once she does, it becomes almost immediately obvious that this woman cannot be underestimated and is not going to be happy to play her part in the administration. It comes at the worst time, with Jennifer finding out about the crash site and wondering if her son is dead, and if Agent 355 killed the pilots (at least giving the impression to her aide Christine that she didn’t know about the plan, which was my assumption). As mentioned before, we don’t see on-screen that Sarah contacts her and it’s safe to assume that she doesn’t, and is now on her own mission, leaving Jennifer in limbo with regards to Yorick’s survival. It also coincides with Kim continuing her scheming, this time accidentally stumbling over Christine having what she thinks is a miscarriage in a bathroom stall and bonding with her when she helps her, becoming the only person to know that she is, in fact, still pregnant. Information is power in this place (and remember, Christine has some very damning information on Jennifer), and Kim will use whatever she can to get what she wants. She also puts her feelers out to Oliver, revealing that the two haven’t always seen eye-to-eye (some minor disagreement in their right-wing ideologies? A class thing?). She offers up all the right-wing wives she has collected around her, and I’m guessing these two will be wreaking some havoc together very soon.

This episode has a lot of meat, but I really liked the scene in which Sarah basically just strolls past the military barrier, posing as a Sergeant, having all the authority in the world that people listen to, once again proving she does not need to resort to violence to get what she wants. How terrifying would it be if there were more than two Agents out there, doing what she does so well?

Yorick: Did you draw all these dicks?

Allison: People grieve in their own way.

Allison did have a baby crib in the apartment, but is very elusive when Yorick asks her about it, which makes me wonder if she is deep in grief or if maybe this lady has successfully cloned a child. How Orphan Black are we going to go?