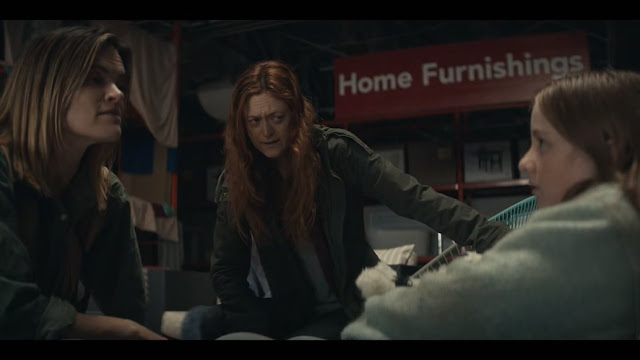 Roxanne: The world ended. It’s okay to be yourself.

If you’ve watched any of the many recent documentaries about cults (regardless which ones), one of the outstanding details about them is how many of their methods use terminology and techniques from therapy and self-management. They borrow this language to promise an improved sense of self, but in fact it’s a diminished sense of self that now lacks outside support networks and only exists to prop up the charismatic leader. In one of the scenes set in Roxanne’s big-box-store headquarters, the women sit in a circle and she prompts them all repeatedly to think about all the ways in which men have abused them – prompting them more aggressively when she is unhappy with the answer, and not caring at all if her way of questioning retraumatises her followers. When Nora and Mack, who have been forced to participate, attempt to leave, Roxanne singles out Mack, stripping away Nora’s ability to protect her daughter, asking her how men in her family have spoken to her. It’s a demonstration of Roxanne’s power – that she is now not just in control of Nora’s fate, but also determines her relationship with her own daughter. It’s a scary look into things to come. Later, in another scene that seems destined to demonstrate her reach and power, she turns away a group of refugees, even though we know that the surrounding areas have been scavenged, that every scrap of food and medicine is now in the store these women are guarding. Nora is made to understand what it means to be on the outside of this group – it means death. 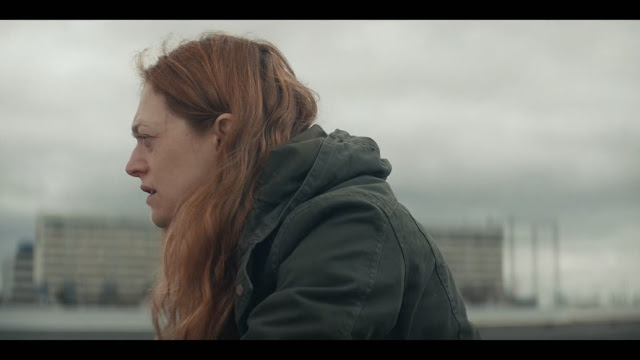 I did find it a little bit surprising how little it took for Hero to change her mind about them. She starts the episode on the outs, hanging out with Sam, who has been implicitly or explicitly told that he is not welcome in any of these group activities. She tells him that she has found testosterone in the connected pharmacy, and a wealth of other drugs that Roxanne has apparently left right there. They get high together. Later, when she is taking a very awkward bath surrounded by women who have no qualms about being naked around each other, she is approached by the collective about her obviously unhappy state of mind, and given repeated reassurances that her past is no behind her, that she can be a new person here. It does make sense that this promise sounds appealing to Hero, who has, after all, betrayed Sam only to delay a return to the person who would hold her responsible for her actions (her mother, now President), but she has previously appeared to be a lot more cynical than to fall for the promises of a cult so easily. It is obvious that she is carrying the weight of what she did just before the plague, that she can’t share this with Sam, who would regard her differently if he knew that she killed someone. But telling Roxanne – an ex-cop, who, not unlike Kim, uses every piece of information that she has to gain an advantage, seems extremely ill-advised, even if it provides her with temporary forgiveness from someone whose opinion of her should have absolutely no consequence.

Hero: No one knows. It’s like it never happened. You can’t kill someone and get away with it.

It’s the right thing to say at the moment to someone who appears to have been looking for punishment for a very long time, but is equally unwilling to face consequences for her actions – Hero has been suffering, has been stuck, has never addressed any of her issues, but at the same time, doesn’t want to actually encounter something that would have her change permanently.

Beyond that, it is becoming increasingly more obvious how dangerous this place is for Sam – a girl approaches him (and weirdly sexualises him), then reveals that she isn’t allowed to be alone with him, then gets caught and kicked and beaten up by the other women, punishment for unwanted behaviour. This is a ticking time bomb for Sam, but the only person he trusts there appears to be unwilling to leave with him. 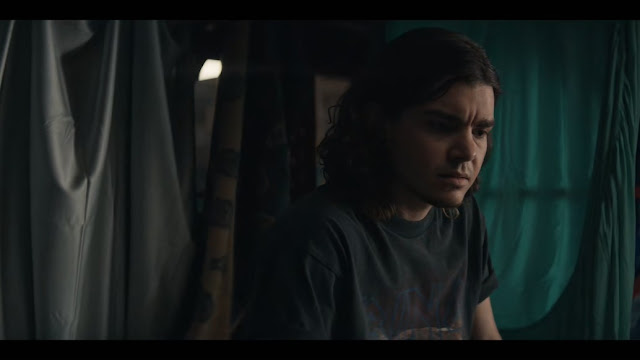 President Brown’s decision to have someone look into Sarah’s files has unforeseen consequences in this episode, even though it remains a bit shady as to how it happens exactly. Kim secures her alliance with Regina Oliver by sharing her suspicions about Yorick, and then somehow, a machinery is kicked into motion where the military tracks down Sarah’s location and begins chasing her. It appears that Jennifer was not fully briefed before the mission commenced, as she would have presumably immediately realised what it would mean if American soldiers laid eyes on Sarah’s charge. From Sarah, Yorick and Allison’s perspective it means that they are now hunted, even if Sarah keeps them in the dark about the fact that she is the person these people are looking for. They first see them at a spooky and beautiful memorial event (at which, once again, Yorick passes as trans) that includes a choir performing Radiohead’s Karma Police and many, many candles, and ends up with them holed up in a church building, where Sarah intends to lay traps for the soldiers following her. Her secretiveness and admission that she hasn’t been in contact with the President troubles both Allison and Yorick, who end up deciding to go to San Francisco on their own.

It’s troubling that the other person Sarah is now charged with protecting is equally unlikely to listen to her – instead of one petulant child, she appears to now have two on her hands. They barely make it out of the woods, Sarah hesitating to kill the soldiers (if it’s moral qualms, or worrying about how Yorick will feel about it), but one of them has definitely seen Yorick’s face. And considering the power struggle happening back in DC, that sounds like really bad news for President Brown.

It is a cruel irony that Roxanne repeats that she used to be a cop, as if cops were famous for helping women in abusive relationships.

Allison assumes that Yorick has a crush on Sarah, but wouldn’t anyone stare at her in awe if they were travelling with her? Also, Yorick finds out about her sleepwalking, which seems like an inconvenient condition to have with her particular job. It remains kind of unclear how aware of it she is.

Lols at Allison trying to tempt Ampersand with “the body of Christ”.

Hero: They’re staring at you because you’re a sight for sore eyes. You’re fucking dreamy.

I know that there are criticisms of Kim as a character – how she is basically a caricature – but I think it’s fair to say that this is a legitimate representation of what the political divide not just in the United States looks like right now. The way she and Regina Oliver (now with freshly blonde hair, wearing a red dress and a leather jacket to in the situation room) talk about their opponents, it’s like they live in an entirely different reality, one that is only held together by a hatred of what they call “liberal values”, but appears to be just factual reality. It’s impossible to argue with because it is so far removed from reason. To top things off, Kim indicates that she wants to adopt Christine’s child (adoption is obviously the only option Christine is given if she doesn’t want the child). Christine walks away from that conversation absolutely stunned – after stealing bits and pieces here and there to address the gaping hole left by the loss of her children, it seems like Kim’s next aim is to take someone else’s child.