One of the questions of this new world is beyond the political reality of managing resources and re-establishing something that resembles civilisation – it’s a very personal, intimate investigation into what a good, meaningful life would look like in this post-Y-world. Everyone has lost people close to them, some more than they can bear. Beyond the privileges of the Pentagon, there isn’t enough food, water, medicine. There are many, many guns, and a clear divide between those willing and able to use them and those who aren’t. It’s a moral divide as well, between those who opportunistically see this is as a chance to fully run with their libertarian fantasies of overcoming and dominating the weak, and those who find such a world unbearable, and seek a way to exist in a truly communal and equitable way.

It’s fitting that the previous episode has introduced us to a community that does the latter, and that it was primarily made up of people who had escaped from a prison. Marrisville is as close as Y: The Last Man has come to a utopia – a small town in which decisions are made democratically, resources allocated according to need, and violence is not used to terrorise others. Ready. Aim. Fire. takes us to the opposite of that. It’s Roxanne’s story, how she became who she is now – someone who leads without consultation, who freely uses deadly violence to keep the women under her control in check when sheer psychological tactics aren’t enough. To destroy any notion we may have had that she does this out of a misguided sense of responsibility, her first act in this episode is to shoot someone who is attempting to leave – in the back, crying after, but without hesitation regardless. 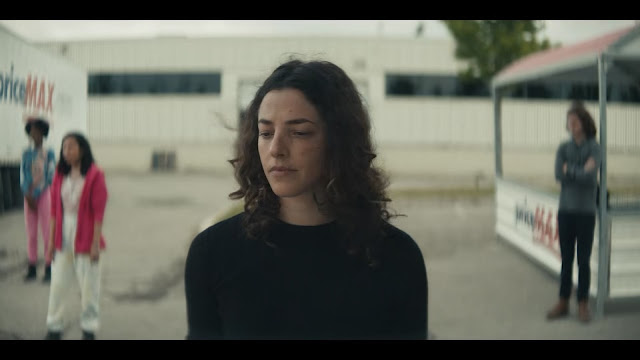 In case this wasn’t sufficient to establish how dangerous she is, her constant aggression towards Sam continues. She is trying to isolate him from Hero, undermining their friendship at every turn, at one stage mocking him for the fact that he used to work in theatre, and that he is unwilling to yield a gun. The conflict about the future of the world, these two approaches to what a good life looks like, are personified in Roxanne and Sam. Roxanne believes this is a dog-eat-dog world in which your own survival depends on exploiting the weakness in others; Sam believes, strongly, that there must be a way to exist in a meaningful, collective way that is not based on hurting others. The tragic outcome of this conflict is that Sam goes into it thinking that Hero, his only family, the woman he has promised to accompany in this new world even though he had an option to go with his friends, would agree with him, and disagree with Roxanne.

What he hasn’t taken into account is how tempting this cult is for Hero, how their normal position on the outside, regarding and debating, would fall apart so quickly. To him, nothing has changed. Roxanne’s attempts to interrogate every one of her group’s relationships with men, twisting their words to make it seem as if their experiences match her ideology, seem unhinged, and clearly aim to isolate and indoctrinate. Hero used to see that, and now she doesn’t, or she conveniently overlooks it because of the comfort of food and shelter, and her unwillingness to go the obvious route, back to her mother, where someone else will hold her accountable for her actions. Hero’s ultimate goal here is to start over without the burdens of her past, and Sam is becoming the person that anchors her in that past that she is trying to escape. Because she is selfish, she overlooks how obviously in danger Sam is, how Roxanne’s behaviours towards him are escalating, becoming more violent. Sam suggests to Hero that they should leave and find people like them: artists, “not so many guns”. Their conversation turns into a fight that mainly seems to be driven by Sam’s revelation that Kelsey is into him, and Hero’s resulting jealousy. She wants Sam to herself but she doesn’t want to give up the safety of Roxanne’s compound, but she has also very conveniently spent a significant period of her life profiting from the fact that Sam loves her. I think at that point it doesn’t even matter so much anymore if she loves him back, because the amount of things that Hero has to deal with in her own head to come close to being able to being in a relationship are enormous (this is ironic, in a way, because it matches up with advice Olivia Thirlby’s character gives to someone who kind of resembles Hero in some ways in The L Word).

Sam: You are my family. You are all I have. So just come with me, please. Just come. […] If you loved me the way I love you, you would keep a single fucking promise, but you can’t.

Roxanne and some other cult members overhear the conversation and immediately begin attacking Sam, implying that he fits their stereotype of an aggressive man, and Roxanne asks him to apologise to Hero (and Hero, wanting to smooth things over with Roxanne, asks him to apologise as well). He refuses, and makes his choice, realising that there is nothing here for him, and that he’s lost Hero. He leaves the same night with stolen supplies, and for a good moment there, I thought that something horrible would befall him – but instead he finds a moment of genuine, joyful peace in a school, playing a piece on a piano, being overheard by the former principal who encourages him, who appreciates his art, and maybe his general idea that this world isn’t worth it if it’s all guns, no music. 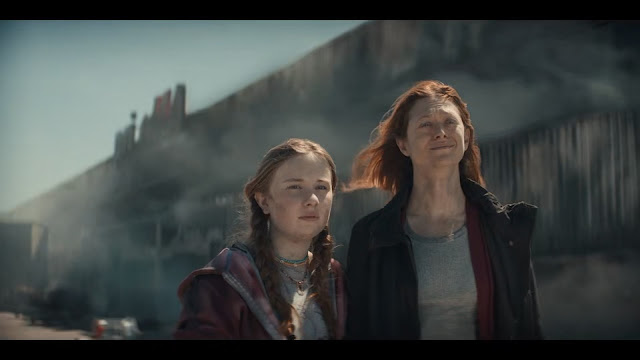 Hero and Sam’s journey overlaps with Nora’s, who is told by Roxanne that she will be asked to leave, very likely because Roxanne recognises how dangerous Nora could be to her. Nora knows that being asked to leave by herself is a death sentence: she is not cut out for the wilderness. She is not resourceful in the same way that Roxanne is, but she does come back into herself in this episode, realising how very useful her past as a PR strategist is. First she approaches Sam to try and sway him into convincing Hero to go back to the Pentagon, to gain all of them entry. But Sam sees her for what she is before the episode reveals how correct his assumptions are. She worked for a President who signed an anti-trans bill into law, she hasn’t even paid enough attention to him to guess that he never played sports, she is selfish, and Sam already has one selfish friend that he can’t rely on, why would he add more to the mix.

Nora then tries to convince her daughter to go back to DC, but Mack has basically done a Hero – assimilated into the cult, except she is a 12-year-old girl, not a grown-ass-woman who should know better. Nora realises that she is about to lose her own daughter to Roxanne’s influence, that all these strategies of isolation and indoctrination have separated them. Nora is backed into a corner, and she reveals herself to be maybe just as dangerous as Roxanne is. After a drunken party (a creepy, creepy fucking party), everyone else is knocked out, and Nora lights the store on fire, destroying most of their resources, knowing that Roxanne’s power mainly depends on her promise of material safety. It would be so easy to confuse that act for an impulsive one, to underestimate her, but it becomes clear very soon that it isn’t: it’s very calculated. She also comes across a missing piece by accident, finding a police car in a nearby body of water, a police car that Roxanne in one of the flashbacks was desperately trying to sink.

This is the key to everything, the key that reveals Roxanne’s entire backstory as a lie. In the car, along with bodies, is Roxanne’s employee ID – not a police badge, but an Assistant Manager badge for the very big box store in which she has assembled these women. Roxanne has created herself, created a story based on her avid watching of Law and Order episodes (in another flashback, we find out that she has stolen a boxset and almost got fired for it, her manager incredulously asking her why she couldn’t just stick to the endless and readily available reruns instead). It was a frustrating job, a frustrating career, one in which her attempts to protect the other women workers from the misogyny of their male co-workers was constantly squashed. Then came the Event, and with it, her realisation of how satisfying violence is, that she was capable of murder. Something deeply buried came to the surface, and Missi Pyle’s performance here is astonishing, showcasing Roxanne’s transformation through her realisation that she now could be anyone she wanted.

We see her barrack down in the Big Box Store, cleaning out dead bodies, killing intruders, cleaning up – and then, over a meadow, regarding the community of women in the shelter, and wanting what she saw. They appear peaceful in the distance, at ease with each other, truly better off without the constant fear hanging over them. She sees it, she wants it, she comes up with a clear plan to take it, creating a place for them and then reintroducing an outside danger that would make it seem as if she were their only source of safety. And they came, and she kept them in line by playing into their fears, by exploiting their traumatic life experiences.

Nora knows all of this, and she knows that Roxanne’s influence is waning now that her resources have gone, that she will need more than just a promise of food and water to keep these women around, that with the men gone, her constant refrain of male violence and misogyny will eventually lose its power. She has found her in, and cuts a deal for herself and Mackenzie, in which she gets to influence the decision=making and has first dibs on food in exchange for keeping Roxanne’s secret quiet, and helping her keep the other women in line. It’s horrifying, and exactly what Sam must have seen in her this whole time, with his experience of having to quickly read people to ascertain danger – and it’s seriously bad news for Hero, who’s stuck there now without a voice of reason to guide her.

I physically shuddered when Hero clapped at Roxanne’s speech, and I’m not sure anymore if she can be redeemed. What a human disaster. Kelsey (who she’s making friends with) reads her palm and tells her she is destined to help humanity, but for now, it seems very unclear how that’s ever going to happen.

Pastor Rebecca would be SO stern about Hero's choices!

The vulture that made Nora realise that her old world had ended makes a return here, kind of guiding her towards Roxanne’s past.

I really, really just want Sam to be happy.