One way to think about the physical graphic novel of Station Eleven is the meaning it has attained after the apocalypse. There are perhaps still ways to write single-issue books – by hand, as Gil does in this episode in a beautiful act of mirroring – but the professionally bound book that young Kirsten carries around with her, that is solid enough to survive her travels (protected further by foil) is entirely an object of the past. We finally hear the full story in this episode, after Kirsten derails the journey of the Traveling Symphony only to check that her book is still where she left it.

Doctor Eleven drifts in space and finds refuge on a severely damaged space station haunted by its survivor, the captain, who appears to be engaged in an ideological battle about the future with the other survivors, the Children of the Undersea. They disagree over the role of the past, over what they should do in the future. Doctor Eleven remains impartial.

It’s relevant here because when she talks to Alex about David, the Prophet, Kirsten realises that the ideology is the same, that David has built his cult on the idea that there is a fundamental rift between Pre- and Post-Pans, those who remember and mourn the world before and those who were born too late to truly know it, and can’t quite comprehend why the others are so bound up in their grief and longing for the world that was lost. Once the Symphony reaches Pingtree (an old country club, surrounded by an overgrown golf course), there is further proof that the Prophet has a horror-movie like MO – he enters communities and steals their children, which is what he tried with Alex, what he would have succeeded in if Kirsten hadn’t stabbed him. 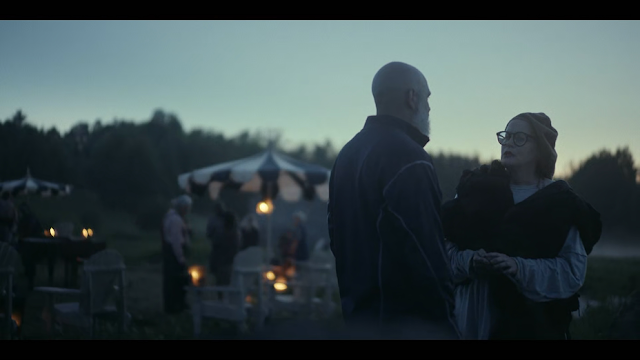 A lot of what this episode does is excavate relationships, and the emotional core is the troubled one between Sarah, the Conductor, and Gil, the former Director who used to be her partner but left her for another woman, and now resides in Pingtree. The Symphony used to have a tradition where it split up, the actors going to Pingtree, the musicians travelling on to the next town, but once Gil betrayed her, Sarah ended the tradition, and the Symphony hasn’t been to Pingtree since. After her conversation with Alex, Kirsten needs proof that Station Eleven is still in the town, because the Prophet has become a mystery: how can a man repeat lines from a book that Kirsten thought only she (and Frank and Jeevan) had ever read, a book so intimate to her that it now feels like it is hers, entirely? So she tricks Sarah into going to Pingtree (by telling a lie about Gil’s new partner having died). When they arrive in Pingtree, they find that the community has reinstalled a minefield after the Prophet stole the two children with the same words that he used on Alex: lines about how they are the first generation to live without trauma, about how the survivors are the only liars left.

We haven’t seen much of Alex before her conversation with David – she is the youngest in the group, the only Post-Pan, who listens to stories about the past as if they were fairy tales – they are interesting, but have no bearing on her life. David’s words resonate with her because she travels with a group of people who have basically made a whole life of the past, adapting Shakespeare plays traditionally, bringing a tradition from the past to each town they visit. Here we see Alex begin to express frustration over it, which is only temporarily vented when Sarah (to impress Gil, who hates Hamlet) lies and tells Pingtree that the Symphony has modernised Hamlet, has brought it to the present times. We know it’s a lie because we’ve seen Kirsten play a traditional Hamlet, and now the troupe has to write and rehearse an entirely new play, in which Kirsten becomes a side character and Alex’ Ophelia turns into the main character who rages against being robbed of her agency, and gets to walk away alive in the end, triumphant. Kirsten is frustrated with that turn of events, in part because she felt so deeply for Hamlet, in part because she is used to being the main event, not the supporting cast. 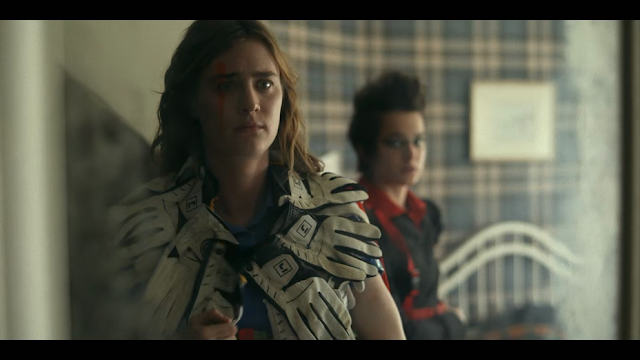 So we have a conflict in the present between Alex and Kirsten about whether the words of the Prophet hold any truth, but beyond that, about how much Kirsten’s protectiveness of Alex actually confines her in a life she doesn’t want to lead. It escalates when Kirsten triumphantly tells Alex that the only reason why she didn’t end up going with David is because she stabbed him, and Alex is shocked by that admission rather than thankful (Kirsten says “you’re welcome”, expecting a thank you that will never come). Soon after, she sees Alex riding off on one of the horses through the minefield, towards the children that have lurked on the periphery of vision the entire episode, after calling the Symphony a “terrified carnival of trauma”.

The conflict in the past is between young Kirsten and Jeevan, and it happens to support what everyone tells Kirsten in this episode: that the words of the Prophet match her own ideology, that she too has these radical ideas about the present and the past, maybe because she was shaped by the same piece of fiction as he was. After all, Kirsten is barely Pre-Pan – she was eight when it happened, and it turned her into something new quickly, something that Jeevan, here at the cabin by the lake, already finds pretty scary. They’ve killed a pack of wolves (which gives Kirsten opportunity to explain how they are the monsters that monsters fear to Jeevan), they’re subsiding in this endless winter, but Jeevan is beginning to express his resentment over a life he doesn’t feel he’s chosen, a life he stumbled into when he agreed to walk Kirsten home. He’s also sad over the loss of his brother that appears to be tangled up with Kirsten, back in the apartment, delaying their departure so that they could perform Station Eleven. In the present, Kirsten tells Alex that she was already dangerous as a kid – fierce, and feral when she finally met Sarah – and now that she is grown she carries knives with her on stage. And more than that, in all of the flashbacks we have seen of her, Kirsten appears to have adapted to the new world well, embracing it after her initial grief over her parents’ death, barely mentioning anything that happened before except Arthur. Alex’s leaving is mirrored in the past, with Kirsten waking up to Jeevan having left her.

In the present, at night, with the community listening to Sarah’s performance of her twentieth symphony, and Gil by himself in his office, with Kirsten grieving Alex, the unimaginable happens: the two lost children return, but they are unrecognisable, and stripped to the very mines that the people of Pingtree buried in their golf course. Gil tries to reach them, but they have become untouchable, and then David’s threat to Kristen becomes true – her friends begin disappearing in the rubble of an explosion.

We see the Symphony’s motto painted on one of its wagons here – “survival is insufficient”, which just happens to be a quote from an episode of Star Trek Voyager (and it feels fortuitous that after Picard, Seven of Nine, who is at the centre of that episode, is once again a current character, not a past one), and also one of the themes of Ronald D. Moore’s (who wrote that episode of Voyager) Battlestar Galactica. After Y: The Last Man, the idea of finding a survivable place, a dignified place, in the apocalypse has played around in my head, and obviously in the world of Station Eleven, that place is the Symphony, just as the place was Marrisville in Y. For the Symphony, there is no greater way to do more than to survive than to perform art – old Shakespeare plays, and Sarah’s new symphonies.

I wonder if the title is confirmation that Arthur (and Clark) were in fact in the Stoppard play together, not Hamlet, which would be fitting – I think Kirsten began considering herself an actress after being mentored by Arthur, but she is a much more traditional actress than he ever was, which is one of the key points this episode makes with the Symphony’s revamped production of a “modern” Hamlet, and Kirsten’s frustrations over it. And of course the title references a modern adaptation, an old tradition in and of itself but previously eschewed by the Symphony.

The envoy from the Museum of Civilization extends another invitation to the Symphony, and is once again turned down, promising to return for a third time – it’s fitting that this coincides with Kirsten trying to find answers in Pingtree, as the answers she is seeking may just be at the Museum.

The scene when the Symphony reaches Pingtree and Gil and Katrina drive towards them in a golf car to tell them that they are standing in the middle of an active minefield (they turn out to be Chekhov’s mines)  is so surprisingly light and funny, especially considering what happens later in the episode – and the way that Lori Petty and David Cross perform all of the layers of an old relationship, of knowing each other so well that they’ve already run through all the ways they could hurt each other, is pretty magnificent.

Gil is working on his Magnus Opus, The Great Book of Joy and Despair, an oral history of the world after it ends – he is, in short, everything that David warns the children about.