The Expanse – Everybody on this ship has something they regret. 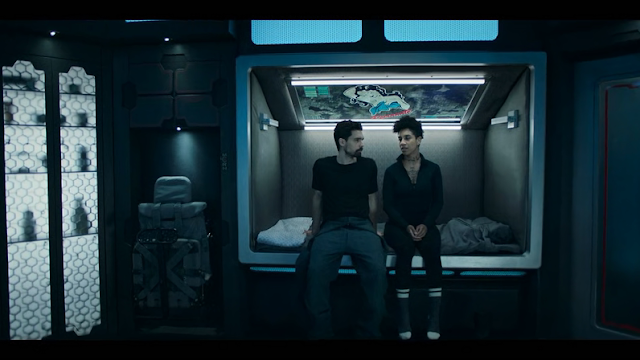 It is quite remarkable how James Holden keeps stumbling into the crosshairs of history again and again, forever driven by his need to do right and to press unmarked buttons. This world would like completely different without him – the ring gates unknown, the protomolecule either running rampant or entirely disappeared. Holden makes another historically relevant decision in Force Projection, one that he doesn’t consult his crew on very likely specifically because he wishes to bear the full responsibility of it himself, knowing fully well what it could mean to let Marco Inaros get away – but there is no way he can allow Bobbie to blow up Marco’s ship when Filip is right there on screen for Naomi to see, there is no way he would ever put Naomi through that kind of suffering. So he disarms the torpedo right before it hits, making Bobbie believe it was a dud, and Marco disengages, disappointed that he cannot fulfil his selfish and tactically irrelevant dream of killing James Holden, and the mother of his son who chose Holden over him. And I’m sure nothing at all bad will come from that decision, especially considering what we see a moment later. Marco, perhaps losing influence bit by bit because he is seen as weak and a coward for stripping and leaving Ceres, perhaps just embarrassed by his son who blames him for engaging the Roci unprepared, yet receiving a communication from the ringgates that another technological delivery has arrived from Laconia. And boy, does that protomolecule-empowered thing look scary (and finally, we have confirmation what is happening on Laconia, and where Fred Johnson’s sample went).

Marco’s decision to cut and run from Ceres station has considerable implications for the new Earth-UN alliance. When Chrisjen arrives at the stripped-down station to interrogate Chief Administrator Sanjirani, she finds out that the station only has resources left for three weeks. We know that Earth is struggling from lack of food after the attacks, and now the prospect of either feeding or leaving a million Belters to die, with all the political and moral implications of that, lie on Chrisjen’s shoulders. Ceres is instead a trap, if a trap of a different kind than she expected. But then, the relief effort begins (with Monica embedded and observing predictable racism from the Inners), and soon, there’s bombs going off.

With Laconia’s technology making its way to the Free Navy, it’s hard to see any good spin to Holden’s decision to spare Marco here. And meanwhile on Laconia, Cara returns excitedly to her fauna and flora to discover that something on the planet has fixed her broken drone for her (was it the alien dogs?), but when she returns home, she finds that her little brother has had a terrible accident. And what would a child who has just learned that something on this planet fixes broken things would do in that situation?

We see the first segment of Monica’s series on how the asteroid attacks have affected Earth, and she is interviewing Pastor Anna! It’s very good to see Elizabeth Mitchell return. The segment does what Chrisjen wants it to do, as seen on Drummer’s ship, where there’s an immediate divide between empathy and sneering disdain in her own crew for what she says about Earth’s suffering (Michio feels sad, Josep gives a sarcastic “Welcome to the Belt”).

Amos’ summary of Ceres station for Bobbie: Noddles, bars, and brothels (unionised ones!). When asked about an expansion on that, he says he’s never bothered to look. Their banter is GREAT, I hope we get more in the last three episodes.

In another moving moment of acceptance, Holden puts Clarissa on night watch, and when she shares that she got her implants to destroy him and what kind of guilt and trauma they have caused her, he very kindly reminds her that she is in good company on the Roci when it comes to regrets. Part of the crew!

Amos receives a message from his old friend Prax who tells him that a scientist he worked with was executed by the Free Navy for spying: and he reveals that they have discovered a protein that (through protomolecule technology, or inspired by it?) could feed Earth easily. It's a great scene because we get to watch Clarissa and him sit through the science talk without much comprehension ("he'll get to it eventually", says Amos of his old friend). Amos knows that if this is important to Prax, it's important, so he forwards the information to Chrisjen.

So Holden lets two men responsible for millions of deaths get away because he doesn't want his main squeeze to feel bad? The writers had better kill off Marcos quick, because any subsequent deaths are on Holden's ever-dithering head.

It's extremely in character: both making bad decisions for sort of understandable reasons and then beating himself up about it. Kinda his whole deal really.