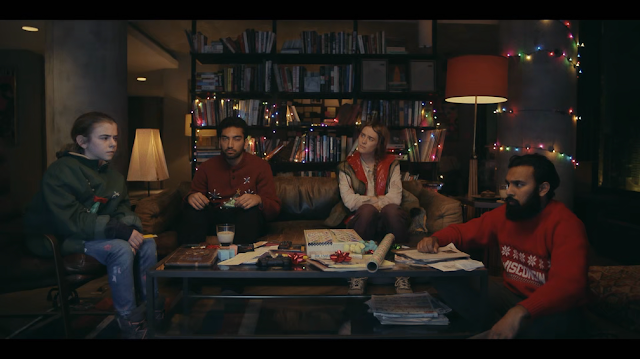 I remember damage. Then escape. Then I found it again. My home.

Goodbye My Damaged Home feels like an extension of Kirsten’s theory that she shared with the Prophet right before the Red Bandana attack: that Station Eleven’s child rebel leader is also Doctor Eleven, stuck in a time loop, trying to fix the greatest mistake of his life. Delirious from the poison dart that hit her, Kirsten dreams of her younger self, and eight-year-old Kirsten claims to have an antidote. But she hides it, and forces Kirsten to look for it, a journey that transports her back to the past, to the three months that she spent with Jeevan and Frank in the Chicago apartment.

The question of what happened there, what damaged Kirsten observed, what pushed Jeevan to the edge, has shimmered on the edge of all of Station Eleven. Somehow, from that experience, only Kirsten and Jeevan emerged, and somehow, they both did so with deep scars, causing Jeevan to eventually disappear on Kirsten. The journey backwards in time, the loop, is ambiguous: on the one hand, Kirsten observes things that she missed as a child that would have gone past her because she did not yet have the knowledge and experience of adulthood that she has now. On the other hand, we see things that Kirsten had no part of – Frank’s frantic preparation of the apartment when he finds out from his sister that his brother is coming, scenes in rooms that Kirsten never entered – and Station Eleven leaves it open if these moments are actually witnessed by adult Kirsten, if her brain is filling in the gaps with guess-work. But then, memory isn’t reliable anyway, especially not traumatic memory, and all that matters here is that adult Kirsten is beginning to make sense of something, under the guidance of her younger self, and she knows it is important enough that she delays using the antidote (fittingly labelled “survival” – which we know is insufficient) so she can witness more of the past. 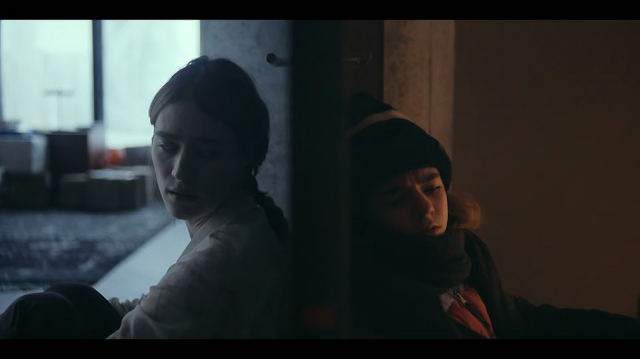 When she lived through the experience of the just-post-apocalypse initially, Kirsten was an eight-year-old child – precocious, but still a child. Seeing those first few moments again, we realise that maybe she missed how panicked and sad Jeevan was, how, while she was waiting for a phone call from her parents who were probably dying, or already dead, Jeevan was processing the fact that he would never see the rest of his family again. Frank sees his brother spiralling, and reminds him that they have a child now that they are solely responsible for, and that means pretending they are not scared – because they are adults. Jeevan continues to resent the decision he made – later on, when Kirsten asks him what he would have done had he known about the impending apocalypse, and he says he would have come back to see his family, would have spent time with them before their death, would maybe be here in the apartment with his sister instead of Kirsten. It’s a heart-breaking moment because the only alternative history that Kirsten, with her limited agency, can come up with is wishing her brother had not died before her birth, because then maybe a babysitter had been home, and Jeevan wouldn’t have had to take her with him. It’s a luxury and a curse of adulthood to be able to make decisions, but also to regret the wrong ones. Kirsten doesn’t understand that yet, but she feels Jeevan’s frustration.

This is maybe why in those initial weeks, she builds a closer and more trusting relationship with Frank, who appears to enjoy her company more. We find out more about Frank here – that his injury was caused by an attack in Sri Lanka, where he worked as a journalist, that he has only been getting gigs as a ghostwriter since, that he has developed a heroin habit and is secretly withdrawing now. He is also obsessed with finishing his latest book, or maybe just more aware of the fact that the world has already ended than his brother is, who keeps talking about what will happen after, when they run out of food. 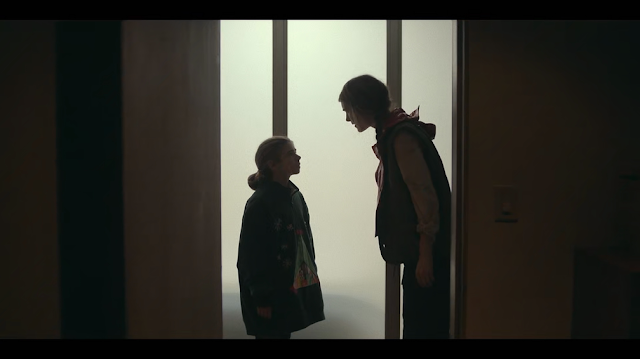 As we get closer to the performance of the play, which is our time-scale here, older Kirsten gets increasingly anxious, trying to convince her younger self not to write the play, because it will delay everyone a day too long. It’s an ominous plea because we do not yet know what will happen, but we do know that nothing here can be changed, that the only thing older Kirsten will gain from this journey is a deeper understanding of Jeevan and Frank. Frank wants to finish his book, Kirsten wants to finish her play, and have it performed, Jeevan is panicking about food supplies, and eventually breaks the seal on the apartment to venture outside. He finds a broken window in a neighbouring apartment – someone’s only way out of this – and a high frequency radio, which back in the apartment only reveals to them that the survivors who are left out there have tales of devastation, warnings about unsafe locations. It destroys something in Jeevan, who maybe had an idea of a normalcy that they could get back to eventually, but it only confirms what Frank already knew. And I think that Frank’s mind is made up at this point already. He knows he isn’t going to leave, not just because of his injury, but because this apartment is his home, and he cannot imagine a life beyond it.

The piece that Kirsten has written is Lonegan’s death scene from Station Eleven, and she has cast Frank as Lonegan, Jeevan as Doctor Eleven, and herself as the rebel Undersea leader. It is almost as if by casting them that way, she has foreseen what will happen – young Kirsten, not quite aware of all that was happening in the background, but sensitive enough to guess it. It’s the scene that throws the rebel Undersea leader into the time loop, if Kirsten’s interpretation of Miranda’s book is correct, a moment he will always regret, killing the only person that made him less alone. At the end of the scene, holding a dying Lonegan in his arms, Jeevan refuses to say the last lines, as if this would confirm that he will lose Frank here – and just in that moment, a stranger steps through the door that Jeevan has left unsealed after his venture outside, a stranger with a big knife, who wants them to leave so he can live here instead.

It has been more than two months, and all three of them have been sealed off from the outside world – there could be no more brutal reintroduction to it than a man who claims what isn’t his with violence, because that is what the outside world has turned into. He stumbles in from the cold to find them all in their hand-made costumes. Jeevan sends Kirsten away – she never saw what happened – but we stay in the room with older Kirsten, to see Frank refuse to leave his home, to see the stranger stab him, and Jeevan kill the stranger. Jeevan calls for Siyan to help him, but Frank dies – he shrouds him in his bedroom. And then Kirsten and Jeevan leave, after Jeevan, in the most fatherly way, puts on her backpack and scarf.

Older Kirsten stays for a while, the poison making its visible way through her blood. She told her younger self that this wasn’t her fault – it’s just what happened, and maybe she has only just found that peace in watching this all unfold again. She is still there, twenty years later, when lush nature has reclaimed the concrete walls and Frank’s body is nothing but a skeleton. Maybe this was the time loop that trapped Kirsten, the guilt over insisting on the performance, delaying them one day for it, and never really knowing what happened. She finally gets to say goodbye.

This is as good point as any to mention how good Matilda Lawler is as young Kirsten! And Nabhaan Rizwan as Frank is so good in this episode as well.

Frank creating a beat from tapes sent to him by the person he ghost-writes for, and rapping the entirety of A Tribe Called Quest’s Excursion over it, is one of those magical moments – and it almost makes me wonder if it further deepened Kirsten’s love for theatre, the idea that a performance can be transformative like that.

Frank tells Kirsten the story of his injury, and it ends with Jeevan flying first-class (on their sister’s credit card) to Singapore to be with him when he wakes up. These two brothers look out for each other, and it’s a story meant to tell Kirsten what kind of person Jeevan is, in case she is having doubts, because Frank already knows what will happen eventually.

When Jeevan breaks into the neighbouring apartment, he finds a Liszt’s La Campanella on the piano (incidentally, the piece that the Conductor was playing when Kirsten met her), and the occupant of the home has written “It’s impossible” on it – the piece, or this world? I think maybe here it would be fair to assume that Kirsten's subconscious is supplying some details, is making up a world small enough that Sarah would have lived right there, next door.

Older Kirsten realises here that Jeevan was deteriorating before the cabin, before his brother’s death, was already talking to himself and talking to his sister before the traumatic events.

Kirsten’s first knife is the one that killed Frank, and she still carries it with her.