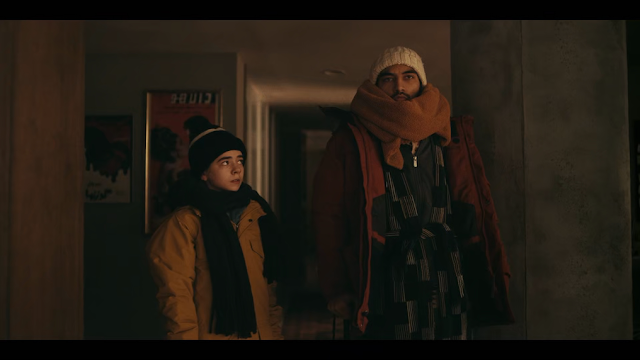 It is difficult to make assumptions about how individuals would do if confronted with a world-changing, life-altering crisis – people do tend to surprise you. There are a few occasions in this penultimate episode of Station Eleven where I felt reminded of Yellowjackets, in which a group of teenage girls (and two boys, and one man) are stranded in the Canadian woods, a personal and functional end-of-the-world in a way – and subsequently either show a surprising resourcefulness (sometimes useful, sometimes freaking scary – this really has been the season of Misty Quigley) in light of the situation, or the opposite, a cynical giving-up, and unwillingness or incapability to contribute (hi, Jackie!). I don’t think that you would have been able to predict which will be which from their lives before – sometimes the utter strangeness of radical change has surprising effects.

They moment that I come back to with Jeevan is the first time we met him, when he saw that something was wrong with Arthur Leander, raced towards him, and then couldn’t actually do anything to help. It’s a profound instinct to be a first responder with none of the actual skills to be useful – and this isn’t necessarily a condemnation of him, as it is a valiant instinct, just an observation. In the cabin with Kirsten, we find that moment mirrored endlessly, whenever Kirsten succeeds in picking up new skills, learning to be a great shot, learning the knife skills we have since seen in action, while Jeevan watches, awed and a little bit scared. It’s not that he is useless – he knows how to break down the deer that Kirsten shoots, he has built a safe home for both of them out in the wilderness – but it’s interesting to consider that maybe he wouldn’t have managed to keep himself alive if it weren’t for the now nine-year-old girl that he has accidentally adopted. Jeevan appears to know this all too well, the ambiguity of resenting that he is responsible for Kirsten, can’t just leave her, that almost every decision he’s made since it happened was based on their accidental meeting, and the fact that Kirsten is keeping him alive, both with her company and with how quickly she picks up basic survival skills.

In a way, Kirsten seems eerily adapted to this life already – as a child, she’s now spent a much more substantial part of her life in the post-pandemic than Jeevan has. Jeevan is holding on to something – when he uses the radio and pretends to be a doctor to a stranger (a more ominous decision than he could have predicted), when he uses something they find in an abandoned town to make a make-shift movie theatre out of a car battery, and suggests that Kirsten charge her phone, even though there is nothing left to do on a mobile phone almost one year out (but it is just what you are meant to do when you haven’t had power in a while, right?). Kirsten, when she isn’t distracted by obsessively reading Station Eleven over and over again, notices that Jeevan is living in a different reality than she is, and remembers that Frank told her his nickname: Leavin’ Jeevan. And for a good long time, that’s what the viewer assumes will happen – especially when the rift between the two becomes wider, Jeevan’s resentment over Frank’s death, which he blames on leaving a day too late for the “stupid” play, the fact that Kirsten morbidly held on to the knife that killed his brother. But in the end, Jeevan doesn’t leave Kirsten: he does, in a fit of anger, because he thinks it distracts her too much (and he considers it pretentious, anyway) throw Station Eleven away when she’s not watching, owns up to it quickly and then goes to retrieve it in the middle of the night, without Kirsten, only to get mauled by a wolf. It’s such a predictably absurd series of events that it is almost comical – and luckily for Jeevan, he survives it (not as stoically as my favourite, Van), but before he can make it back to the cabin, a woman (who he was fighting on their exploration of a nearby-town, the ninth person they ever met in the after) returns for him and takes him with her. Since this saves his life in the end, it’s good that Kirsten was too distracted to shoot her back in the town. When he wakes up again, he’s in a bed – and it looks like a hospital at first, the kind of place you are meant to go to when you’re seriously mauled by a wild animal, but after closer inspection, it turns out to be a furniture and bedding store. It turns out that the woman who took him there, Lara, is the same one he lied to on the radio about being a doctor, and she was looking for him in the town because this place is in desperate need of doctors – Terry, who later reveals herself to be one of the only surviving doctors in this world because she lost her licence after running a Ponzi scheme (!) has turned this place into a birthing centre, and almost nine months after the big blackout, all of the women there are about to give birth. It is exactly the kind of chaos that Jeevan was bound to find himself in – surrounded by pregnant women, having to pretend to be a doctor so they keep their cool while desperately reading Gray’s Anatomy, while also learning how to walk with one foot.

And of course it takes Jeevan a while to accept the idea that he could be useful here, that he is actually needed, in spite of his lack of qualification, that for once, this first instinct of running towards someone who needs help can finally be combined with the skills to render aid.

Someone tells Jeevan that they are in desperate need for a new words to describe these new relationships, these new families that are forming – he describes Kirsten as someone he just ended up with, but it is about finding a way to think about those people you met just before, just after, like Kirsten, who was trying to count each person they have stumbled across since it happened. There is a woman there who waits every day by the doors for someone who promised to show up for her – and in the end, it’s not the father of the baby, but just someone she met on the way (tragically, she dies in childbirth, and strangely, the man she was waiting for was a boy, Tyler on his journey to becoming the Prophet).

What follows is such a surprising combination of joy and weirdness – a showroom of women, in the throes of contractions, helping others to give birth while giving birth themselves. For this whole year after the outbreak, the world felt like it was overwhelmed by death, so much so that the presence of a dead body is no longer anything to be shocked by – but now, Jeevan is overwhelmed by life. The women laugh and scream – wild joy, and chaos -  and he stumbles around trying to be helpful. In the end, there are so many babies – and the one woman, who tragically died, because it would have been impossible to claim that in this post-hospital world, everything could turn out well for everyone. 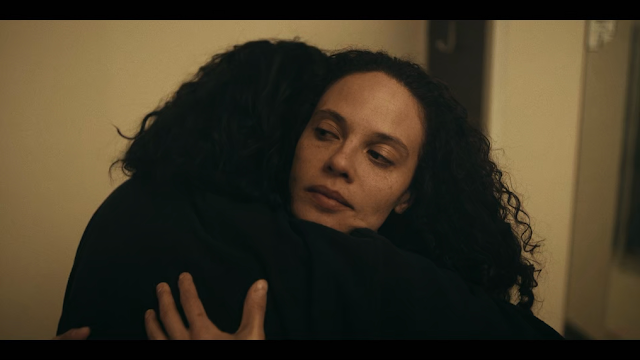 After, Terry tells Jeevan that her real name is Deborah: in this new world, anyone can be anyone. Jeevan can be a healer, a doctor – all it takes is dedication and learning. And Terry, the former disgraced doctor, has built something here – something that I am thinking will eventually become St Deborah by the Water, our starting point, a safe place for people to give birth. Jeevan leaves and checks once again for Kirsten, but she is not there. She has in fact found the blood-soaked Station Eleven, and drawn her own conclusions, scars she still carries twenty years later. And Jeevan – who has remade himself, who has finally found in his place – twenty years later, has a family with Lara, three children, and saves lives. Somewhere along the way he found a way to heal himself.

There is an incredible, sad beauty to the programmed keyboard that Jeevan finds in the house, where a DJ has used old phone messages to listen to the voices of his kids – and Jeevan builds a story out of it, realising that the man probably died alone, a while after he lost his whole family. It reminded me of Y: The Last Man, and how it handled collective grief expressed in surprising art installations and rituals.

Even the music in this episode is a bit Yellowjackets!

Terry! I really hope this all worked out for her. I’m assuming it did, considering a whole town is named after her, but still.

It's strange to see Tyler in this episode (one of his only lines is "There's no before"), but it fits the way this show uses serendipity. It would have been nice to have one episode without death though - when it comes here, it hits hard.

Wonderful review! I think Jeevan did learn to shoot since he shot the wolf's "whole family," according to Kirsten in episode 3 or so (and she ends up using one of the pelts around her neck and shoulders when she first meets Sarah) which makes sense that there's only one wolf that attacks him in ep. 9 instead of the pack.

I've yet to watch Yellowjackets but I've definitely added it to my TBR.

Oh yes, I completely forgot about that, even though all the pelts are right there. Maybe too distracted by Kirsten becoming an actual sharp-shooter!
And Yellowjackets is very good, I highly recommend.