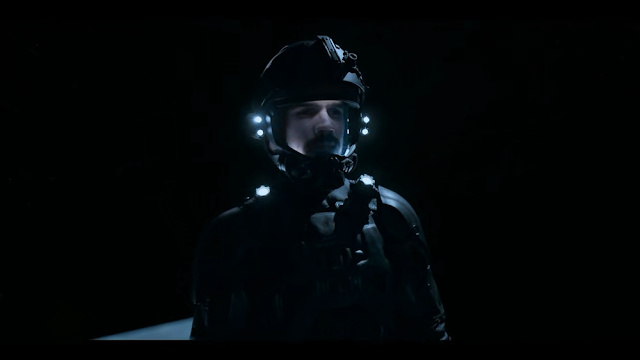 Admiral Duarte gives us Redoubt’s theme: “Having something you love that you can’t protect – it’s terrifying.”  He says this to Cara at her brother Xan’s wake – a comment on the many coincidences that have let them both to be on Laconia instead of other places in the universe, a statement that for him does not apply to a person, but to the loss of Mars. It is a reminder that whatever Duarte (and his scientist Cortazar) are building here, it is a combination grief over the loss of something and boundless excitement over the potential of the protomolecule technology they have gained through Fred Johnson’s sample. Cortazar tells Duarte that he has successfully established some kind of connection with the massive, ruinous structure above Laconia. At night, Cara steals Xan’s body to take him to her strange dog that fixes things. Both of those actions will have momentous consequences.

Attempting to protect something you love – that summarises James Holden, and he frequently makes questionable decisions because of it. Of course it doesn’t take long for someone to find out that he was the one who disabled the torpedo headed right for the Pella. It’s Clarissa who figures it out in the end, going through the weapons logs, and of course she tells Amos, with no particular outcome in mind, just because she knows that this is above her paygrade, well beyond her comprehension of the dynamics on board the Rocinante. Amos has always relied on other people for a moral compass – he doesn’t have one of his own – and he came to the Rocinante following Naomi’s, before he began trusting Holden as Captain. But he knows that the decision not to kill Marco was a mistake, one that will cost lives.

Amos: I trust you to do the right thing, what you think it is. We had a chance to end Marco and you pulled the punch. Now I keep trying but I can’t see how that was the right thing.

Later, when Holden tells Naomi what he did, and that he did because he could not be the man to kill her son, because it would have forever stood between them, Naomi calls him out for making that decision for her: she says she made that decision to leave Marco and Filip, and it almost cost her everything, but it was her decision to make, and she made it to survive. It rattles Holden to the core, to realise that his is taking agency away from Naomi instead of protecting her, and Naomi is maybe best aware out of all of them what Marco is capable of, what it means to leave him wounded and alive. He finds some unexpected peace later in a conversation with Peaches, who explains to him that each life that she has taken has stayed with her, that she is haunted by the ghosts of those she has killed, and that Holden should never be sorry for not having killed. It’s a surprisingly tender moment of connection between the two that cements how much Clarissa has become part of Holden’s crew, but I’m not sure if she’s right about this one. On and above Ceres, the united fleet of the UN and the MCRN are discussing what to do after the bombs, after Nico Sanjrani’s proclamation that the Belters on Ceres are still after freedom, and will not welcome the presence of Inners. Marco really has built an effective trap here, and Chrisjen insists that they have to stay and help, but her Martian counterpart seems ready to stray from the alliance. Later, she watches the footage that Monica has put together from being embedded with the first troops on Ceres, and finds footage that she thinks will make them look weak – an old man, who says that this is not a war between Inners and Belters, but one between those who want war and those who want to live freely, and in peace. Monica responds that the footage makes everyone look weak: for creating a world in which this man has to fear for his life and that of his beloved cat, for a world in which body bags are piling up in the hold with no end in sight. Monica has realised something that Chrisjen is only coming around to: that to win this war, they don’t just have to show the plight of the Inners. They have to give Belters a reason not to follow Marco Inaros, a way out of this skewed economic system that takes Belter labour and lives.

It’s a good moment to think about what to offer as an alternative to Marco instead of just reacting to his attacks. After his failed attempt to kill the Rocinante, he is fiercely punishing what he perceives as a betrayal by another ship, ordering his second-in-command Rosenfeld to execute the command and anyone who pleads for their survival. His pride is hurt, and there is nothing he values higher – and this, along with Drummer’s discovery of his massive caches of resources that he has amassed in spite of Belters going without food, air and water, hints that this person is no longer a revolutionary, but a prideful, arrogant man well on his way to becoming a dictator. It brings up the question of whether Marco was every genuine about his concerns, or if his liberation ideology for the Belters was only a cover for his own ascension. In any case, Rosenfeld sees how unstable and unpredictable he is, how his actions make him appear weak in front of the crew, and she intervenes – not to topple him, but because she knows that a place alongside him, not that he has forsaken Filip, is powerful.

Filip has been demoted to repair tech, a job he has no experience in and has to learn from scratch, but at least it gives him contact with Belters not sheltered by the privilege of their birth – it’s the first time he appears to consider how other people live under Marco’s command, as the man who is teaching him everything explains about his worries for his brother on Ceres. It’s a rare moment of connection that gives a glimpse of a different Filip – but it’s fleeting. 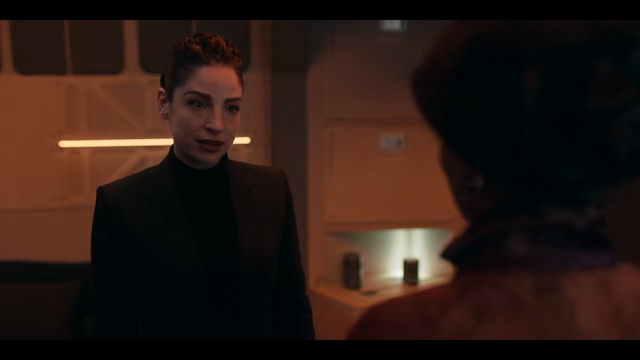 Because while this happens, Drummer and her crew are out in the deep at one of Marco’s caches, discovering untold riches, containers and containers of goods. It’s a perverse bounty, considering starvation on Ceres. It is also heavily defended, and in the skirmish that ensues, Michio proves that she deserves a place on the crew when she saves Josep’s life (by amputating his arm, going full Misty Quiqley on him). Seeing her partner hurt enrages Drummer, and so, after months of being on the run from Marco’s wrath, she comes out of the shadows to deliver a blistering message to him:

This is Camina Drummer, and this message is for the traitor, the coward, Marco Inaros. You hunted me and mine, and still we’re here, unbent, unbroken, unbowed. And you, you are nothing. You stole from your own, you abandoned Ceres to the Inners and left Belters to starve. You called yourself a Champion and then you ran. So go and raise your bounties, track me down and kill me if you can, doesn’t matter anymore. I will always be the one that took back what you stole. Camina Drummer did this to you. Live shamed, and die empty.

Drummer has always been the true version of what Marco purported to be, a freedom fighter devoted to the freedom and dignity of the Belt. And now she’s coming for him.

In that first scene on Laconia, some attendants at the wake discuss what will happen to the driver of the cart that killed Xan and they imply that he will be facing a firing squad – a hint at what kind of place Laconia is under the military leadership of Duarte.

Amos and Bobbie listening to Alex’ music (“I’m so Lonesome I Could Cry” plays, and they sing along) is an emotional moment of tribute to the dead pilot, a reminder how close Bobbie was to him.

It’s unclear what Filip makes of the information that the torpedo was disabled before it exploded – he might assume it was Naomi, looking out for him.