Westworld – I am an infinitely adaptable machine, darling. 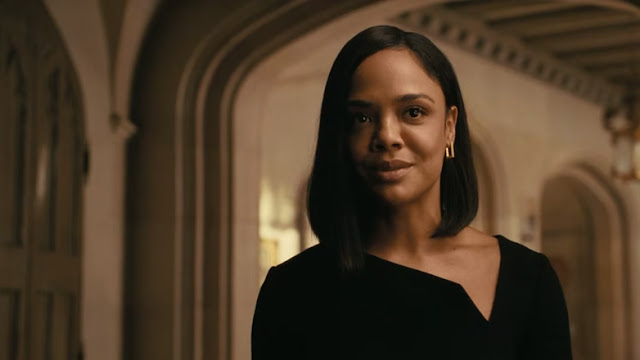 It has been satisfying how quickly this fourth season of Westworld shares its secrets, instead of building them all up until the end of the season. Considering the difficulty of following all of this complex storylines without getting confused, of keeping track of all these characters (including if they are now human or host, and live in the real world or not, if that distinction still matters), it is a relief to at least find out pretty much straight away what William is up to. After acquiring the data storage facility through the application of violence, and, it turns out, zombie virus flies, he is now on a spree of violence to remove any legislative obstacles for his reborn Westworld (the Golden Age!). In this episode, those measures include killing and replacing a US Senator and using his wife as a lab rat for the before mentioned zombie virus – an inelegant but effective solution to the question of what to do about all those pesky humans threatening the safety of hosts, after decades of violence. Early on in Well Enough Alone we also realise that William, in spite of his long speech to the Vice President (in which he calls him and F. Scott Fitzgerald an “effete pussy” and whacks him over the head with a golf club) about the value of aloneness, isn’t alone at all – he is merely Charlotte’s henchman, and Charlotte, as we know, has an axe to grind with humanity as a whole. The real William is being kept as a trophy in a cryo-chamber (that makes him look, of course, kind of like Galileo’s Vitruvian Man) and occasionally awakened so Charlotte can gloat. It seems like a deserved ending to this man’s life, even if the fact that he still is alive is probably going to come back to haunt her. If she’s getting into zombie lore, she should know about the double tap.

The other most satisfying thing about this season so far has been the buddy cop comedy aspect of Maeve and Caleb teaming up (there are no questions here at all about who the sidekick is – it’s the guy with the floppy hair who is a lightweight drinker and doesn’t really like hats). They discover the host replacements of the Senator and his wife and also that William has found a way to make them more resistant to Maeve’s mind control, which makes them even more Terminator-like – our two heroes prevail in the end, and Maeve hacks into the Senator-host-mind, which gives her the first glimpse of the woman behind the curtain (“it’s worse than I thought”, she says). They learn that there are, so far 249 other new and improved hosts, and they also stumble over the decisively gross zombie-experiments in the stables of the estate, where Mrs Senator delivers an invitation to the opera before committing suicide by Maeve. It’s sheer body horror (more so later, when we see a fly in action on the Deputy Attorney General), and it doesn’t bode well for the future of the world.

Maeve and Caleb make it to the opera, which turns out to be just a gramophone in the middle of the stage that is a key to a downward elevator into a hidden bar beneath – they share a few drinks, talk about their trauma – but then, once the bar begins to move, Maeve realises where they are going. She’s escaped Westworld once across the ocean, but now the carriage is taking her right back to it, except now she’ll be a guest. She sarcastically endures the typical concierge spiel (it’s unclear if her observation of Caleb’s interaction with the host who has been programmed to seduce him is merely noting another shortcoming of her human companion, or if there’s something more sinister going on), including the wide selection of fitted clothes and weapons, and off they are into the new and government approved Westworld, which is now a take on 1920s America. You can’t outrun your past, etc. 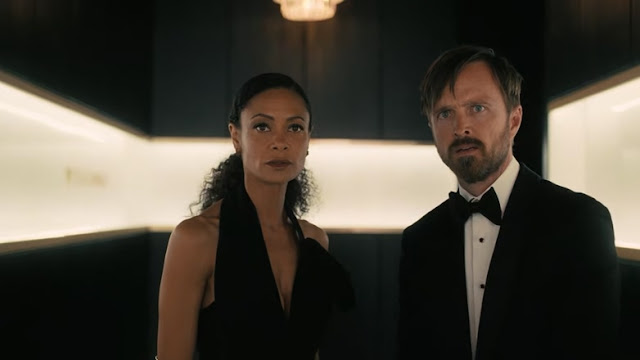 Christina, meanwhile, is still deeply traumatised by Peter’s fate. Her roommate reads his obituary to her, thinking it will convince her that the man was deeply disturbed, but instead it just provides her with just enough information to go on a hunt of her own – a mental hospital in which he was once a patient. She takes a day off work to investigate (on the way there, she finally finds the story she wrote about him – what a creepy coincidence that he was right about her being the author of his sad life! And her boss reveals that they can track her when she accesses her work files, but maybe they can just track her all the time). She finds that the hospital has been closed for years and is in the process of being redeveloped, but that mysteriously, a whole wing of the hospital is named after Peter – who left money when he died – except that was only three days ago. Maya, who I am beginning to suspect might not be just a roommate, reassures her that isn’t going insane, but the world around her is. Also it’s pretty clear that we will eventually see that tower that a patient at the hospital drew over and over again.

Poor Clementine. The episode opens with her enjoying a stroll in some market, buying a flower like she appears to have done many times before, only to once again fall victim to William, who takes her back to become another very effective bodyguard. Justice for Clementine!

Vulture spotted the great Liza Weil on the train to Temperance, fingers crossed she'll actually feature on the show and this isn't just an Easter egg for fans of Gilmore Girls and Anyone But Me.

This might not be anything but the door into the speakeasy Caleb and Maeve find themselves in has an upside-down tower shaped glass insert – upside down towers always just make me think of Annihilation, and of course, towers feature heavily in the truth-speaking homeless man’s ramblings that Christina walks past every day, and in Peter’s phone messages.

The homeless man tells Christina that there is a song or sound that control everyone that only he and the birds can hear, and ominously, Christina ends up finding a whole bunch of dead birds around the Olympiad Entertainment tower right before deciding not to go to work that day.

It is pretty brilliant how Evan Rachel Wood modulates her voice as Christina, especially in the phone call with her boss – her pitch is higher, less threatening than Dolores was in the last few seasons (compare that to Tessa Thompson’s interpretation of Dolores as Charlotte).