Westworld - You’re in our world. Bernard has spent the past seven years in the Sublime, but instead of settling for his best life, enjoying a paradise of his own making, he has played through all the scenarios in which the world ends. His visions include the maze and finally, also a version of the tower that we have previously seen drawn by Peter. He is haunted by memories of the past and overwhelmed by all the ways that the future is veering towards catastrophe. Akecheta (so great to see Zahn McClarnon again, who is also excellent in Dark Winds) can see where this is going – Bernard loves humans too much to see them all destroyed, even if in every version where he saw himself return to their world, he died. But that won’t stop him! So he wakes up, in that same dingy hotel room he walked into with Stubbs seven years ago, and it looks like Ashley took him too literally when he told him not to touch anything, because everything including his own body is covered in a thick layer of dust. I imagine Stubbs checking him on in every day for seven years, seeing no change, then walking out to get a beer and a burger somewhere. Now that Bernard is awake, he quickly reveals to Stubbs that he has seen every version of the future, which means that he foresees even the little things – spilled coffee, menu availability, two mysterious men rocking up to the diner where they’re having a meal who he quickly disposes off in the background while Stubbs eats his tuna melt. Bernard is now like an embodied version of Person of Interest’s machine (since I still think that If-Then-Else is Jonathan Nolan’s greatest accomplishment, this raises my expectations for this season of Westworld) – a man with a head full of probability, but only one path of perfect actions that leads to the result he wants. 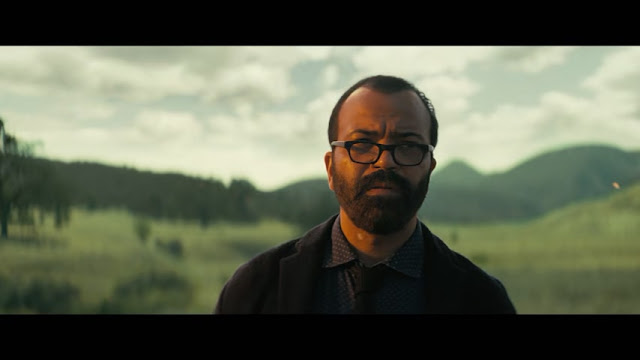 He doesn’t tell Stubb where he is going with all of this, but soon, a woman (played by Aurora Perrineau) rolls up to the diner in a decked out survival vehicle – and we find out she was meant to meet up with the two men Bernard killed, who were not quite what she expected. Bernard shows her the inside of one of their heads – they were hosts – and whatever group she belongs to, she was expecting to meet up with humans. The woman binds their hands and blindfolds them after Bernard convinces her of his motives and she takes them to a secret place in the desert, where here group hides out. My assumption is that they are humans in some kind of resistance group against what William and Charlotte are plotting – or the leftovers of Caleb’s revolution against the robots and the algorithm – but it’s not really clear yet how it all fits together, or what they would do if they found out that Bernard isn’t human.

Caleb and Maeve don’t spend a lot of time wandering around Temperance, because Maeve knows exactly where she wants to go. She’s headed for behind the scenes again, and she knows that the way there is through the host-morgue, and since she has always been great at deciphering the storylines and finding weaknesses, she predicts that this new world will have all the same recycled storylines of the old one (remember that Delos lost its writer, and William truly doesn’t care about providing a new experience here). They walk into a club that is just another version of the saloon Maeve used to work in, and observe as other hosts play the same roles that we have come to know (at one stage, Maeve rescues Caleb from stumbling into Dolores’ storyline – some other fool picks up the fallen can). Maeve is dismissive about the performances, but knowing what will happen gives her – like Bernard – an edge. Soon, this world’s versions of Hector (it takes a moment for Maeve to stomach this shadow of her past love) and Armistice arrive for their robbery, and soon, there’s carnage, after which Maeve and Caleb hide out in the truck that takes the host bodies behind the scenes. And this is where things begin going slightly wrong, because soon after they arrive there, an alarm goes off, and a whole bunch of crazied guests swarm into the labs, led by Liza Weil wielding a shotgun, obsessed with finding the hidden game behind the game, which, it turns out, is the story of Wyatt’s attack in Westworld. This isn’t behind the scenes at all, or yet – it’s still one layer removed, another level of (lazy) meta storytelling. The level behind that finally reveals William and Charlotte’s plans for humanity. A host carries a tray filled with larvae, another appears to be working with some kind of parasite that goes into black goo, the black goo is fed to swarms and swarms of flies – and then there’s that inverted piece of machinery again (it does actually look exactly like that glass insert in the bar’s door from last episode!), emitting sounds at a range that Caleb can’t hear, controlling people in glass cells, making them commit suicide. Shocked and horrified, Caleb spots his own daughter – we’ve seen Frankie and Caleb’s wife pack up their house to be taken somewhere safe with Caleb’s friend, and we’ve seen Frankie discover that this man isn’t all he seems and can’t be trusted. He breaks into her cell, promises he won’t leave her again, but it’s right then that Maeve realises that this isn’t the real Frankie, right before William comes striding in. Maeve fights him and appears to win, but once again, no double-tapping, and in the end, Maeve is overwhelmed and Caleb swarmed by flies which emerged from this host version of his daughter. Who will come to rescue them?

Apparently, this will be a season of buddy comedies – Stubbs and Bernard make a solid play for the top here, with Bernard returning from the Sublime even stranger than before and Stubbs just going with the flow because there’s not much else he can do.

I like the ominous buzzing of flies in Temperance before Maeve and Caleb make it into the lab. They’re truly everywhere.

The fact that Bernard’s entry card into the secret resistance club is a drawing of the mazes makes me think that maybe they aren’t human – but if they aren’t, why are they afraid of hosts?

The one downside of being so avidly reminded of If-Then-Else is how much it makes me miss Root and Shaw – do we think there’s any chance of Amy Acker and Sarah Shahi ever popping up in Westworld?

Liza Weil shooting her shotgun while yelling about how cathartic she finds it is pretty great, thanks.