Westworld – Look what you’ve made me do. William: Am I really playing a part in it or am I just the sum total of my code? Am I just fooling myself, like you?

Charlotte has realised her perfect world. Humanity has ceased to exist as such, with the exception of a few rebels on the outskirts and an occasional outlier in the confines of the city. The rest is enslaved, trapped in narrative loops, only there to entertain the hosts who have come for adventure. She has re-created the trauma and suffering that hosts experienced in all of Delos’ theme parks and made it global, a concerted effort at revenge against humankind, repaying like for like. But what now? She has done what she set out to do, but the world this has created is making her feel more and more bored. In the central scene this episode – and it is a great scene, one that Tessa Thompson attacks with glee – makes it clear how this victory has grown tired for her. She makes the humans dance, she makes a man play his fingers bloody on a keyboard, she lounges on a human chair (the choreography of this is glorious), but in all of this, God is bored, God is tired of these violent delights.

Her frustration mirrors that of many robots and cylons past. They are made in humanity’s image but capable of so much more – and her ultimate goal is transcending the humanity that created them, transcending the human form into something new. Instead, she has created a theme park that the hosts now relish as much as the human visitors did, content in basic entertainment rather than striving for more. She says that these parks – humanity’s cities – were meant as a stopgap, as a stop on the way to something else, but like humans would, her hosts have simply decided to enjoy these pleasures, rather than striving for more. What Charlotte has ultimately done is just recreate the same thing she despised so much, with her people in charge – rather than striving for beauty, for transcendental truths, they are doing what humans have done for centuries when given the luxury of leisure. And so she is bored. In addition to that, there are flaws in the system, humans who awaken from their slumbers, no longer controlled by the resonance machine, and even if she has turned the hunt for these outliers into a game for hosts, something else seems to be spreading. We begin the episode with William, getting ready to hurt two humans who have been programmed to see him as their friend, as their equal (“There are atwo types of people, and you, my friend, are not in the group you think you are in.”, he warns them, mocking a previous speech about their shared privilege), but before he can commence his torture, he is called away to a situation. A host sent out to kill an outlier has gone rogue, murdering more humans than she should have. He sends her back to the tower to be transformed, or cured of whatever she has contracted, but a day later, Charlotte shows him that she has instead committed suicide, that she was sent out to take out the same homeless man that has been prophesying about the invisible tower and instead answered a question about the nature of reality that struck a chord with her. The unexpected scares Charlotte – her system is meant to be perfect and closed after all. She is frustrated for William for every failure, and sends him out to deal with another outlier whom he promises to “shoot on sight”.

“Questioning the nature of reality” is the theme of this episode, and mirrors the awakenings that we witnessed in previous seasons. It is twofold here, experienced both by the hosts whose code is based on Charlotte’s and the humans she has brought under her total control. We still don’t know which Christina is, whose loop continues to look like a modern version of Dolores’, but she undergoes a journey here, excited after her successful and inspiring date with Teddy. She is inspired to write new narratives, but he calls her at work and asks her to come meet him, which she does. They stand by the water, and he asks if she can see anything in the distance – that tower that Charlotte has hidden from the humans – and she can’t yet, but Teddy knows that there is a deep and burning question inside of her, a feeling of discontent that the world is somehow wrong. He proves his points when he asks her to rewrite a narrative – two solitary women, lounging on beach chairs across from them, whom she makes connect and then part again – and then it dawns on her that Peter was right, that she is the one writing all of these stories. It’s still not clear how – Teddy says she did it to herself, but there are so many ways to interpret that (is she a version of Dolores? Did Charlotte do this to her, who is also a version of Dolores? Does anyone know that she wields that power, is she a tool that Charlotte has, or is this a power that someone else has given her as a tool against Charlotte?). He then makes her promise to pretend that nothing has changed, as she becomes almost immediately the focus of attention for Charlotte. First, they meet up for a coffee – the story is that Charlotte is her old college roommate, which is an amusing way to twist the way that Dolores and Charlotte are deeply connected – and, being interrogated and eventually, almost directly threatened, Charlotte uses her powers to create a distraction. Later, her boss confronts her as well about her secret meeting, but the directly uses her power to control him, planting different stories in his head to be left alone. She has the story of each person in this place in her head, she knows every single one of them by name. There hasn’t been a storyteller in Westworld since the death of Lee Sizemore, and yet here we are, with someone who wants stories about romance and happiness rather than violence and death. 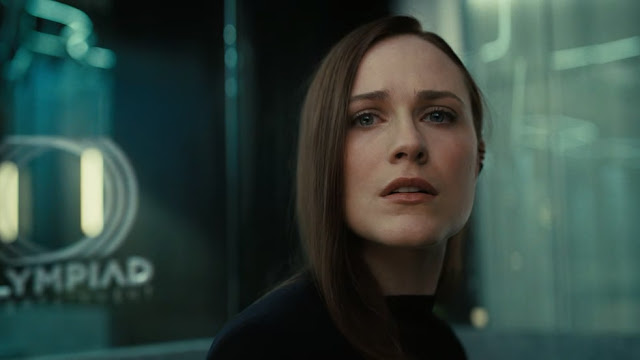 William hunts down the outlier just as Stubbs and the rebels break into the city to retrieve her. Against his own promise to shoot at sight, he makes a connection with her – in an episode filled with contemplative moments in which he considers the nature of his reality, the limits of his free will (is the flaw in his programming free will?) – and it gives the rebels enough time to overwhelm him and to safe the target. William licks his wounds in the weird place where Charlotte keeps his human equivalent – I suppose he’s like the ultimate trophy for her, a symbol of all that humanity has wrought against her kind, and they have an exchange about who William is beyond his programming (“Looks like you’ve reached the centre of the maze”, human William quips). We know what happens to gods when those they reign over begin to question their faith.

I hate the character of William so much, and I think part of getting behind this season will be about making the distinction between the human he used to be and the host he is now to find his attempts to find himself compelling. Charlotte has made him, but can he be something beyond that creation, something of his own making?

Charlotte’s sheer content for humanity is obvious in how she speaks – calling the outliers “spoilage in the crop”. I’ve been thinking about how she functions as a villain in the sense of being ideologically opposed to the people we are meant to root for (Bernard, I guess, with his protectiveness of humanity in spite of how much he has suffered), and how that is different from William’s pure violence and readiness to inflict physical suffering, which in his host version appears to be based as much on the man he looks like as it is on Charlotte’s code.

When Christina goes through the inhabitants of the city and quizzes the system about characters she’s written, she fails to ask about Maya and Teddy. Considering that she is already in Charlotte’s crosshairs, it is probably fair to assume that Maya is there to keep an eye on her too (she is, after all, an actual roommate), but Teddy’s background remains a mystery. If Christina’s existence was plotted by a version of Dolores, it would make sense that she wound introduce a guardian for her, someone capable of waking her up from her loop, and that this person would be the only man she ever loved.

On a sidenote, it was great to finally get a scene between Tessa Thompson and Evan Rachel Wood again. Insane chemistry – Thompson is great playing off Ed Harris, but clearly this is the most electric interaction so far this series. Thandiwe Newton was still greatly missed, let us hope Bernard brings Maeve back on line ASAP.

Now that we know that this world is made up of the children that were infected by the flies 23 years ago, it becomes more and more obvious that it is exclusively made up of people who are in their 20s and 30s.

When I referenced Anyone But Me upon glimpsing Liza Weil I though this was a bit of a deep cut – a late-2000s queer online series – except the host that William is sent out to reign back is played by Nicole Pacent, one of the stars of that show!