Westworld - What happens when this war is over? 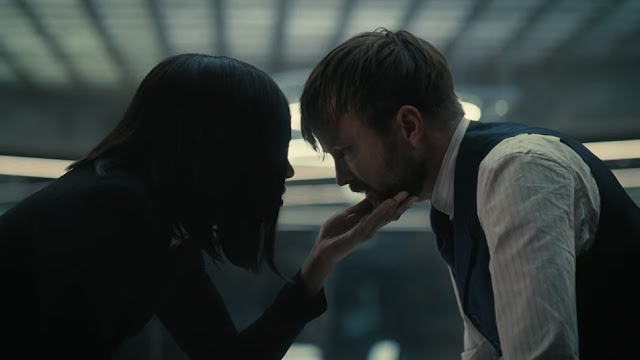 Welcome to my world.

I haven’t really asked the question about how these three pieces – Caleb and Maeve, Stubbs and Bernard, Christina – fit together in terms of timeline. It would have been too easy for things to be linear and concurrent, and just from the obvious difference in aesthetics, it was easy to guess that Christina’s world was removed in some way – temporarily, or in terms of reality – from everyone else’s. Generation Loss builds up to the great reveal of how the pieces fit together, and once again provides answers almost straight away, instead of trapping the viewers in a puzzle.

The big arc here is that of Caleb and Maeve. We finally see what happened at the lighthouse, when the two of them killed what remained of Rehoboam. Caleb was severely injured, and Maeve took him to a hospital, guarding his bedside (“I confronted something I had never confronted before. Mortality. The finality of death and your kind.”), constantly thinking about what it means to provide a future for someone. In a heart-to-heart, she tells Caleb that the reason for why she lived such a secluded and lonely life was to provide him with the freedom to build his own – and ironically, the first time she tried to breach the divide between herself and the rest of the world, when she tried to reach out to him, was when the power outage happened and Charlotte’s eye turned towards them. It’s sheer tragedy, Maeve, who will never be reunited with the daughter she loved, choosing a life of solitude so Caleb can build a family, and it’s that kind of connection and willingness to bring sacrifices that ultimately determines how this will all go.

Caleb wakes up in Charlotte’s fly lab with a severe headache, realising what is happening, and that this is her plan for humanity. Her disdain for humans is obvious from everything she says about “his kind” (as if Caleb  was ever in a position of power in that world, as if that even has any meaning), and she says she’ll keep him around for a while rather than making him kill himself, just to see what the fuss is about. William still loves to hear himself talk, so he misses that Maeve is hacking into Charlotte’s resonance weapon, overloading it so that she can overpower William and Caleb can do the same to Charlotte.

Caleb, Maeve and Charlotte make their up to Temperance, where Maeve claims she’ll be safe because she’s seen all these stories play out a thousand times before. They steal a bootlegger truck and go to a different location somewhere in the desert, while Caleb desperately fights the influence of the resonance weapon that has been turned back on and is attempting to undermine his conscience. It’s another big showdown – once again, nobody thought to make sure that William is truly done, so of course he pops up again to kill Maeve, but she manages to hack into a weapons system that buries both of them under tons of rubble. Caleb loses conscience and wakes up with Charlotte well back into control, except – she tells him that it doesn’t matter where he is, but when. It’s a shocking moment for a man so desperate to return to his young daughter, a man who’s never wanted anything more than live a regular free life. As the truth of his situation dawns on him, he insists that he is still himself – but Charlotte says he is a version of himself, one of countless others, that 23 years have passed, that they are now in her world, in her version of reality. Caleb is no longer human, and as he escapes the true prison she has built him, the building he ends up running out of is Olympiad Entertainment, and the world he discovers beyond the doors is Christina’s, where the tower that emits the controlling sounds is right there, off the shore.

Last episode, I didn’t actually pay attention if Stubbs or Bernard mention how many years have passed since Bernard went to sleep, but as this episode unfolds, it becomes obvious that it wasn’t in fact seven. C, the mysterious woman who picked them up to take them to her resistance group, is Frankie – desperate to find a trace of her father out in the desert, defending these two intruders against the leader who insists they are dead weight. Bernard promises her a weapon and they dig in the desert sand, and what they find is Maeve!

The Golden Age as “the super spreader event of the century” hits differently in 2022 than it would have a few years ago.

Maeve’s “here I was thinking Wyatt was Dolores’ dark side” is our first reminder of who Charlotte is.

Christina’s been staying up all night painting, and she asks her roommate if her painting “looks like anything to you”, which is a smart call-back to “it doesn’t look like anything to me” back in the day – we know now that the tower is big and obvious in her world, and the only reason why nobody can see it is because they’ve been programmed not to.

Christina gets a little side-plot this episode. Her roommate introduces her to another potential suitor, except this one couldn’t be any more different from the loser she went on a date with before – it’s Teddy, glowing, charming, asking questions that are genuinely interested, demonstrating that they already have a deep connection (“I feel like I’ve known you lifetimes” – “And now I know you’re extremely cheesy”). He talks about how strange this world is, a world in which the most unbelievable things turn out to be true and the ones that seem most real turn out to be stories they tell themselves.

In her great villain monologue, Charlotte tells Caleb that she found infecting adult humans didn’t quite work out, because their brains aren’t malleable enough, but the 23 years that have passed were just enough time for a whole generation of infected children to mature. Whatever this world is, she’s fully in control of it for now, and Frankie’s resistance group is trying to change that, now with Bernard’s help.

Generation Loss, apart from being an apt title (and a great novel by Elizabeth Hand) refers to a loss of quality in subsequent copies of data - remember this is now the circa 250th copy of Caleb.