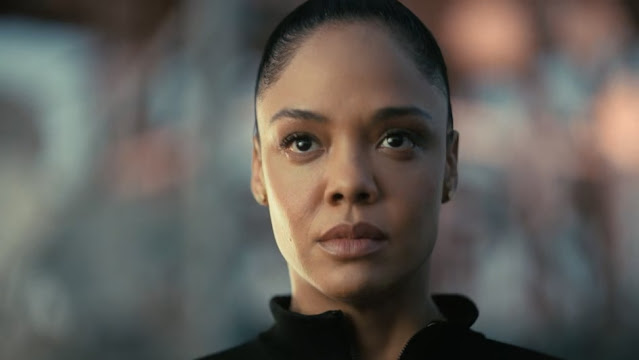 How can anyone resist a system that is as absolute as Charlotte Hale’s? We have only seen the one city that is under her control, but the implication is that she reigns over much more – that the few humans resistant to her mind control are all that is left, and that there fight is more or less hopeless, bothering the regime like an annoying fly rather than putting it in any actual danger. The seeds of Charlotte’s destruction are there, still: the hosts who are glitching for reasons she does not yet understand, Bernard’s attempts to restore Maeve, a host who can control others, Christina’s awakening to her reality and power.

Charlotte’s torture of Caleb is her way of dealing with the frustration over now knowing exactly what is going wrong. She has created and recreated him 178 times now, taunting him with her control and the hopelessness of his situation. He awakes in new places, to be interrogated about how he is different from other humans, only to expire and awake again. In his most recent form, Charlotte questions him about his daughter, offering a way out for him if he delivers her to him, but all that does is make him realise that she hasn’t been able to track down Frankie on her own, that this shortcoming is a thorn in her side. Charlotte leaves, and Caleb makes a horrible discovery – a previous version of himself, close to death from whatever has been limiting his time-span. But then, he realises that the ramblings contain a way out, a message passed down from version to version.

Caleb escapes by following this message. He finds a way to remove the hatch at the bottom of his cell seconds before incineration. He finds traces that previous versions of him have attempted the same escape, and even as he lands in a pile of his own ashes, suddenly there appears to be hope. The breadcrumbs lead him to the top of the building (on his way there, he somehow manages to overwhelm one of Charlotte’s helper-hosts), where he rigs up some equipment to finally, after 23 years of radio silence, send a message to his daughter Frankie. 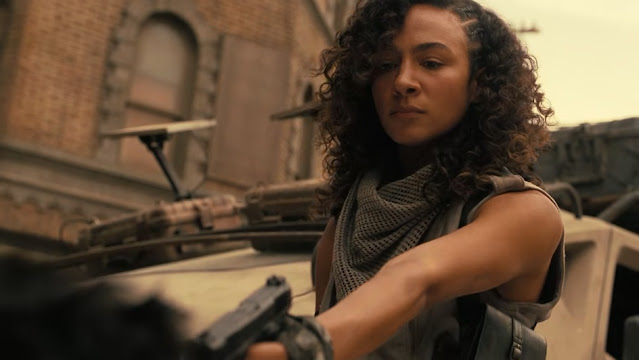 Frankie, who is driving Maeve back to the old Westworld tinker chamber so that Bernard can fix her, has turned into such an interesting, complex character in such little time. A flashback reveals how this resistance group started: it was her and her mum and another guy (one of Caleb’s old buddies, maybe), and they went deep into the city to find other outliers. One of those guys was Jay – young then, a little older than Frankie, and grieving the loss of his brother whom his parents no longer remember. Their life was precarious, and somehow, it has now led to this suspicious , hard woman who has spent a bigger part of her life just trying to survive than she has with her dad. She still sends her daily messages into void without hearing back. At the lab, Bernard rigs up some old equipment to fix Maeve’s body and control unit, all the white negotiating with Frankie about what he is trying to accomplish here. He reveals some more quirks about the park on the way, a different way in which the obiqutious system was spying on the guests, collecting data all the way, which has now built Charlotte’s empire of almost complete control. Frankie is suspicious because all those skills that Bernard reveals on the way are so clearly exactly the framework upon which Charlotte built, even when Bernard insists that all of that happened after his time (literally, while he was sleeping). He also continues with his mysterious statements about all the versions of the future he has sign, which culminate in a very dire warning to Frankie once her other friends show up – that one of them will inevitably betray her, that the him and Stubbs, who they’ve bound because they don’t trust them or their motives, are her best shot.

It’s a seed of doubt that plays out almost immediately as Frankie begins testing the people she trusted. They’ve just come back from their mission to retrieve the latest outlier, and Bernard’s insinuation is that one of them was replaced – was it her girlfriend, or one of her best friends, or maybe Jay? In the end, she figures it out because gloomy, realistic Jay never wanted to pretend to be her brother, but this new Jay tries to tug on her heartstrings enough for her to notice that he’s no longer real. They fight – he doesn’t want to kill her, which means his orders from Charlotte are to bring her back alive, and to retrieve Maeve’s pearl, which holds a key to everything – and in the end it is Maeve who ends the fight.

There’s a little moment there, between all the flashbacks to Caleb’s memories of young Frankie and waking up in the hospital where he lost Maeve but met his wife the first time (in a heart-braking story, Frankie relays to Bernard how she cares for her mother when she was dying slowly) – Maeve looks at Frankie and probably sees exactly what she lost. She’s done that before, when Frankie was a girl, but now she stands in front of her grown into a woman, and maybe Maeve is thinking about how she will never see her own daughter grown. Frankie told Bernard that she could never trust the hosts because to them, emotion and pain are affect – something that can be turned off, something that is a choice – but Maeve’s strength has always come from the emotions she refused to suppress. She dearly misses her daughter, and most of the things she’s done since her escape have been about getting her back, and here’s Frankie, a daughter, looking out for herself and maybe holding the seed for humanity’s rescue. Caleb’s message from the rooftop comes through in the middle of the fight, scrambled and incomplete, and so unlikely to Frankie, like a dream, after all those years. He tells her that she is stronger than him, that she will win this, exactly because the world Charlotte built isn’t real but what Frankie has, in the desert with her fellow rebels, is real. It’s unclear how much of that Frankie heard, but it doesn’t really matter – she believed in her father’s survival all these years and here he is, even if it’s just fragments.

It’s a swansong of sorts – it doesn’t really matter know, truly, what happens to Caleb, because he’s played his part in the story. On the rooftop, Charlotte reveals to him that this is all her plan – his unlikely escape, his message – because it was the only way to get him to reveal the truth. She is disappointed in the mundane nature  of his message, but I think part of her hatred of him is that his daughter is still out there while hers died, in spite of all of her attempts to save her. Caleb is already a dead man walking, it doesn’t even matter that much that Charlotte kills him and all the remaining versions of him. There’s a new Caleb growing already – but what will Charlotte do now that she has found a more tangible path to Frankie? And is Caleb right? Are the hosts glitching because the world Charlotte created for her people is not worth living in, just another sort of prison, this time built buy one of their own kind?

A tiny conversation between Charlotte and Clementine about the puny humans and their tiny plans – Clementine prefers to stay with the sheep rather than the outliers though. I wonder what this story still has in store for its most tragic character.

It bears repeating how absolutely great Tessa Thompson is – she embraces the kind of villain that Charlotte is fully. Aurora Perrineau is great in this episode as well, with a lot of very quiet, stoic work from a character who had to learn to fight so early on (Sarah Connor-esque).

Not entirely clear yet what 4D-chess-plan Bernard is working on, but Stubbs is along for the ride.