Westworld – We could save ourselves. 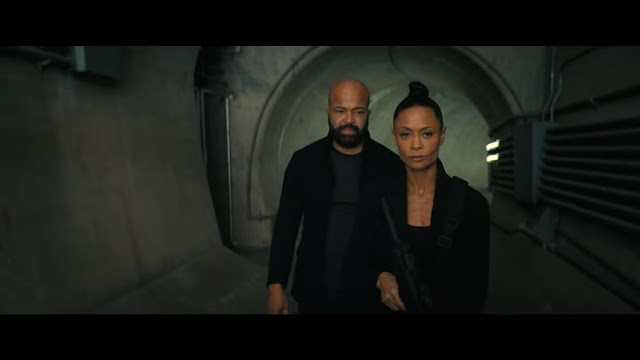 I mentioned Person of Interest’s If-Then-Else a little while ago, as a note of comparison to what Bernard is experiencing in this season of Westworld. He has played through all the possible scenarios of the present moment in the Sublime, and seen them all end in death – and like the Machine in POI, attempting to calculate a way out of an impossible situation with the least damage to the people it wants to protect, Bernard is trying to find the one path that leaves a glimmer of hope alive for both humans and hosts. We see him and Maeve walk into Charlotte’s server farm, where Bernard admits to Maeve that he can’t see this end well, and she says that she wouldn’t fight with him if she didn’t know that at the end of it, she could reunite with her daughter in the sublime. And then it all goes wrong – the dam breaks, they die. But because this is a version of another story, Bernard goes right back to the moment before they entered, tweaks a few details, and plays the scene more successfully. We only see these two versions – one where he tells Maeve the truth, and they fail, and one where he doesn’t, and they succeed – but of course, in the background of all of this, we know that there a million of other ways the moment could have gone, and this is merely a shortcut to the one path that works, at least for the moment. Maybe this is why Bernard always seems slightly removed from the moment, as if he isn’t fully present or engaged. His commitment to humanity is always there, but knowing of his own death has almost put him in a position where he is already not all the way there anymore.

Bernard’s lie to Maeve that he will return her to the Sublime ensures their survival, and they travel to where the showdown at the end of the episode will happen. Everyone is headed for the tower, except Stubbs and Frankie, who set out to save Caleb from Olympiad, and Christina, who is on a journey to truly realise who she is under Teddy’s guidance. Her first reaction to hearing what she is is dramatic: she goes into the bathroom, runs a bath, and then stays under water for longer than should be possible for a human, proving a point about her mortality.

The tower is at the centre of the episode because Charlotte, in another threatening conversation with a new Caleb, reveals her plan for the future. She will shut down the cities and the humans inside of them, putting them in cold storage like that hosts once were, and command her hosts to transcend to the next, no-longer-resembling humanity stage. They have played long enough and not lived up to their potential. Charlotte thinks it is the proximity to humanity that has made them weak, has driven so many of them to self-destruction, and so she will rid hosts of humans once and for all. It puts a timer on everything that happens, a new kind of urgency. William isn’t sold on Charlotte’s plan. He doesn’t believe in transcendence, after all, the man his programming is based on conceptualised the world as a Hobbesian anarchy (a world in its natural state without a sovereign is one in a constant state of war), a dog-eat-dog world, in which culture is meaningless and civilisation distracts from the sheer fight for survival. The real William, trapped in his cage, taunts him about his dependence on Charlotte, and eventually, host William stabs him - but it is not in defiance of his ideology, but in accepting it for himself, and deciding on a path that diverges from Charlotte’s. William’s ideology of survival was never based on any keen observation of humanity, it is merely an expression of his own selfishness, his lack of connection to others in this world and inability to empathise with anyone else.

At the end, Caleb and Frankie have a tearful, unlikely reunion. Frankie is grown up, but Caleb is exactly the same as he was when she saw him last. They run away with Stubbs, for now save from the inevitable confrontation between Charlotte, William, Maeve and Bernard. It’s Maeve who confronts Charlotte just as she is about to transcend – a process she approaches with hesitancy, for all she has preached about becoming more than humanity, her connection to her human form is strong. They have an epic fight that is cut short when William arrives and shoots both of them (in the head, the implication being that he destroyed their pearls and that their death is no final). He then finds Bernard, who is replaying the conversation he had before returning to this world from the sublime in his head again and again, as we are trying to find the glimmer of hope that he saw in this scenario. He walked into it knowing he and all of his friends wouldn’t survive (he did come clean to Maeve, earlier), but what is that kernel of hope? Is it Christina, off with Teddy? William shoots Bernard and programs the tower to create a world in his own image in which everyone fights for survival to the bitter end, a world without connection. Stubbs, Caleb and Frankie narrowly escape once everyone begins fighting, and Christina desperately tries to stop it with her mind control, but finds that it is overridden by the pulses from the tower. And then Teddy explains to her that everyone here can’t even see her – she is a ghost, not truly present in this reality. Is she the hope that Bernard had?

Teddy’s revelation at the end about Christina not truly being there is interesting, considering we have seen other characters interact with her.

Stubbs is pretty stoic about the fact that he waited 23 years for Bernard to wake up only to be told that he won't make it out alive.

It is hard to see how the next episode will play out with so many of our regular characters seemingly dead – no Maeve, Charlotte or Bernard. But then I guess the thing about Bernard is that we can never be entirely sure about the finality of whatever we see play out.

Bernard confirms to Maeve in the beginning that the server farm houses the sublime, but that the code to access it is still hidden in his head, and Charlotte wouldn't be able to get to it without him. Bernard does seem to have done something to the Sublime at the dam, so maybe it's already open? I wonder if this is all moot now with both of them dead, but we'll find out!

That fight between Maeve and Charlotte is one for the ages (and again, very T:SCC).

Charlotte’s comprehension about what those in her charge want appears to be so limited. She talks to Maeve about bringing hosts back from the sublime to live in her world, even though the sublime is Westworld’s version of heaven (presumably, these hosts would be about as happy about being ripped out of heaven as Buffy Summers was).