The Handmaid’s Tale – We thought we made it up because we had to. We have spent a few episodes now sidelining the true horrors of Gilead, with the exception of Lydia’s attempt to place Esther in the Putnam household and the terrifying exchange between Commander Putnam and Esther. June has been singularly obsessed with Fred and Serena, but it the violence she experienced at their hands doesn’t come back in flashbacks in this episode – instead, Border returns us to the question of what Hannah’s future is. Serena used her as a pawn at Fred’s funeral, knowing she was delivering a threat to June – Hannah is still in Gilead, is growing up in the Mackenzie household, and if she can wield power again in Gilead, Serena can control what her future holds. This is why June, after seeing her daughter on so many screens, obsessed over the colour of her dress – she knows that this colour will decide what horrors her daughter will experience in Gilead, and the only person who can answer any questions about Hannah is Nick, now so far away across the border. But this is the moment when Moira reveals a secret she has kept from June, knowing it would make her all too willing to put herself in danger: there is a group of refugees operating along the borders that has ways to communicate with Gilead, and can get messages and things across. Of course, they must go there – alone, because men are now allowed.

In a way, all three storylines this episode are about parents (of sorts) worrying about the future of their children. Lydia is in the hospital, where both Esther and Janine are in a coma after the poisoning. Furious, she hits Esther, and desperately, she pleads with god to spare Janine’s life, to not punish Janine for whatever she did wrong. Ann Dowd always does a tremendous job with the character, who is so very difficult to have any kind of sympathy for – her religious fervour has caused so much suffering, her insistence that she is solely looking out for her girls masks that she is doing nothing, truly, to protect them, because Gilead wouldn’t even allow her if she tried. She pulls strings and manages to force Mrs Putnam to visit her, so that Angela can see her mother – and somehow, that magic that saved Angela’s life works again for Janine. She wakes up, and Lydia thanks her god, because in this twisted version of religion, Lydia believes that her pleads have been heard. 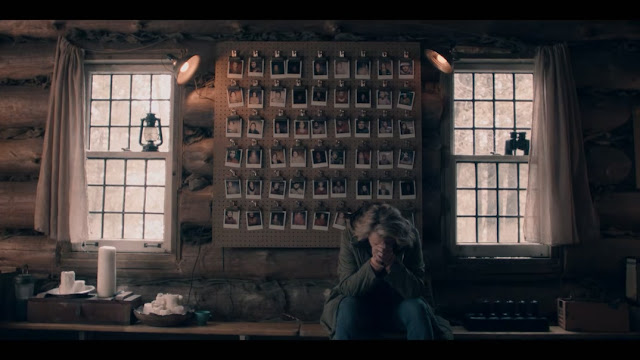 June finds that here past acts of heroism bring her cachet with the resistance group – they regard her with awe, almost, and tell her not to minimise her own efforts. Moira appears to have a hard time to hear June lauded for things that she knows have put both her and others in mortal danger, because she knows how close June is to drifting back to a life where everything is at stake all the time. Slowly, regarding the women the group saved and the many more women they lost, they come to realise that this is the fabled Mayday: a group that, when they were still trapped in Gilead, they thought they might have made up because they needed them so much. In the end, Mayday is individuals, making brave choices after escaping the incredible horrors of Gilead. They are isolated from each other for security, but there is a sense that this network spans far and wide.

Serena’s journey is the farthest, in a way. After the successful international broadcast of the funeral, the wheels are beginning to turn, and she is formulating a plan to bring her closer to power. A meeting of Commander Lawrence, the Mackenzies and, surprisingly, Nick and his wife, shows her attempting to manoeuvres people into position. She subtly supports Commander Mackenzie’s fear over June Osborn’s reach (considering he has stolen Hannah). She picks up that Commander Lawrence is in a precarious situation himself, as an unmarried man in a position of leadership that mistrusts men without wives and handmaids. The only unknown is Nick (and his once again lovely wife). After the meeting, in a private conversation, she suggests a marriage of convenience to Commander Lawrence – after telling him she is grateful that Fred died before the birth of their child, considering his continuing poor choices. Of course, Serena doesn’t know all the things Commander Lawrence has done for June, and he doesn’t know about his alliance with Nick, who is unlikely to ever want Serena anywhere near power. It is interesting to see Serena, one of the unknown architects of Gilead, once again overplaying her hand because she thinks that the cage she helped built doesn’t concern her: what would these powerful men think of a woman who so obviously is making a play, is attempting to get the upper hand? 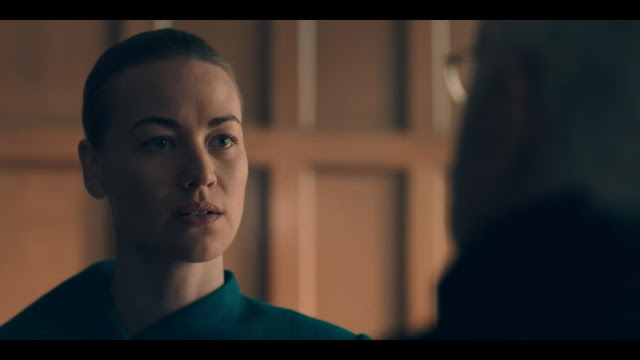 When she comes to realise her error, it is already too late. She’s told Mark Tuello that she will stay, and he surprisingly lets her, in spite of the fact that she must be his greatest asset, especially after Nick tells him he has to protect his wife and can’t help him (a conversation that is, dangerously, overheard by Commander Mackenzie, who makes a not too subtle threat). She hears of a Council meeting that she thinks will give what she wants, but instead she finds herself again facing powerful men, who tell her she must leave Gilead – even if it is to be an ambassador for a country that is trying to reposition itself internationally – because Gilead doesn’t “have the proper infrastructure for unusual women to live within our borders”. She can ask for a staff, a budget, but none of that will detract from the fact that they are sending her back to Toronto, where June is waiting for her, as if they’re hoping that this thorn in their side will be dealt with without any of them having to get their hands bloody.

June, in the cabin, finally gets through to Nick, and learns from him that the dress Hannah wore means that she will be sent off to a school to become a wife – her 12-year-old daughter, the one person she couldn’t save. Nick also tells her that now that he has a wife (a wife that, he says, June would like, which I think is an accurate assessment on his part) he can’t risk it all anymore, because it’s not just his life at stake. Whatever June does next, she won’t have his help. He asks her to keep herself and their daughter Nichole safe – but it’s hard to see how she’ll be able to do that and save Hannah at the same time.

Just before she leaves, she is told that the resistance group has heard through the grapevine of Serena’s return to Toronto, and she somehow manages to get back just in time to deliver a dire warning. These two women are now in the same city.

I have called Mark Tuello hapless before, but I do wonder if he wasn’t aware of what would happen, that there was no way that Serena with her obvious scheming would be allowed to stay.

I do hope that whatever else happens, Commander Mackenzie meets the horrible end he deserves.